Army of Two is back and it’s louder, more in your face than ever before. Does it expand on what we have had previously, or does it leave a bad taste in your mouth? Read on to find out. 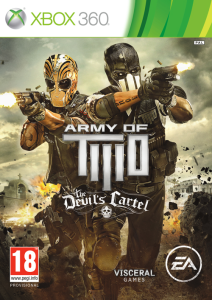 The story within Army of Two: The Devil’s Cartel sees new T.W.O mercenary newcomers, Alpha and Bravo take to the streets of Mexico to take down an infamous, corrupt and deceitful Mexican drug cartel. Former main characters in the series, Rios and Salem are not the main focus this time round but will feature during the latter stages of the game. The story itself sticks to the Army of Two formula but unfortunately, at the same time, it feels very stereotypical and predictable. The story itself that features in the Army of Two: The Devil’s Cartel has a few twists and turns towards the end, but it still feels like not much thought was put into the general story and what sticks it all together as a package. The main problem with the story is that it feels so lifeless and uneventful.

Graphically, Army of Two: The Devil’s Cartel is unfortunately a mixed bag. While it looks adequately fine in places with detailed environments and nice touches of detail, the biggest problem with it is that the textures can be very bland and frequently far too buggy. Certain issues include pop-up items appearing out of nowhere and flat, uninspiring textures that would have been fine on a current-gen launch title, but not in 2013. It’s the same with some cutscenes. There are moments when they look very detailed and fit a title which appears on platforms that are coming to the end of their life cycles, but just like the main graphical side of Army of Two: The Devil’s Cartel, far too many cutscenes look rushed and in need of added time for polish.

The audio that features in Army of Two: The Devil’s Cartel is nothing special, but at the same time, it’s not needed to be. Gunfire and dialogue fits perfectly in the context of the game and although nothing here will blow your mind with mood and substance, the audio is adequate. A few cutscenes have a moody emotional presence but in terms of audio making a statement, that’s as far as it goes.

If you have played any previous Army of Two titles in the series, The Devil’s Cartel will be a familiar experience. The game is essentially a co-op action title that makes a Jerry Bruckheimer movie look like an episode of Songs of Praise. As well as its all-out-action premise, the game features a cover system alongside familiar action throughout.

Regarding the main control and gameplay experience that is thrown in front of you with Army of Two: The Devil’s Cartel,  it’s a solid game with some good, strong mechanics and those that love a good action shooter will feel at home here. As much as the main campaign was solid enough, I wish that there was more included in the campaign as it’s so repetitive, that it starts to become a chore playing it. Every mission (there are 49 of them by the way) will see you shoot, run for cover, move forward, shoot and repeat. There is no substance to what you are doing and it’s so one dimensional, it’s laughable.

While it’s solid and enjoyable enough when you are in the moment of taking the heads off 248 cartel members shoulders, the series seems like it’s stuck in some kind of rut. Nothing has evolved and if anything, the series has unfortunately gone backwards in some ways. In previous Army of Two games, you had a vast amount of two player interactions. These include the ability to grab hostages, or use parts of the environment to create shields to help you through trickier situations. This undoubtably gave a bit of variation to the proceedings but none of that is present in Army of Two: The Devil’s Cartel.

One new feature that has been included and is a good one, is Overkill. To activate Overkill you need to fill up your Overkill gauge which can be done by… yes, you’ve guessed it… killing cartel members. What Overkill enables you to do is, with unlimited ammo, obliterate everything around you while time slows down for a limited amount of time. While it’s quite a shallow feature, it works in the context and works well.

Movement within Army of Two: The Devil’s Cartel feels very awkward at times making it a frustrating experience. Not only is this because of the buggy cover system mechanic, but also in the way that everything is laid out in front of you and one of the biggest and damn right inexcusable decisions is to have an invisible wall telling you to wait before you can continue to the next location. Are we in 1995 again?

One of the biggest gripes with the gameplay itself is how buggy it is. I’m sorry to say, but this is one of the worst games I’ve experienced for a long time with glitches and frustrating issues that should not made it into the final release. There were situations throughout my experience with the campaign that when pressing the button to use the cover system, the game didn’t respond to what I asked it to do and when in the full brunt of a gunfight against half an army of cartel members, this can become a frustrating annoyance. While it didn’t happen on a regular basis, it still takes its place in the game and it’s something that shouldn’t have made it into the full retail version and with a little extra lick of paint, it could have been avoided.

Other issues include grenades not exploding once thrown, getting stuck in the environments, framerate issues including the screen shaking violently and poor A.I that includes getting in your way during a gunfight, needing to be revived (when you are in the middle of a gunfight) and mainly becoming a hinderance than a helpful addition.

Another poor showing in this 3rd instalment in the series is the characters themselves. Like I said previously, gone are Rios and Salem who actually had something about them and showed that while the Army of Two series has always been shallow in its own right, they at least had some kind of personality. They are replaced with two new main characters, Alpha and Bravo who not only have the most uninspiring and generic names ever created in a game of this magnitude, they also have little to no chemistry and some of the worst banter ever. Put it this way, their jokes are about as funny as toothache. The main issue regarding the two new characters is they also have as much personality as a garden shed. Aside from the new beefcakes themselves, most of the other cast members are just as bad. While the voice acting for various characters is done well, the character development just isn’t there. I think Visceral Montreal must have had the ‘stereotypes A to Z’ book out when developing the characters that would feature in an Army of Two: The Devil’s Cartel.

While there are many negatives within Army of Two: The Devil’s Cartel, the game does have its merits if you look past its downfalls. Yes, it’s very one-dimensional, but it does have a good amount of fun attached as well. Shooting out snipers or tackling armored vehicles with your helicopters turret is good fun, but it’s just a shame that the majority of the experience is exactly this. If developer Visceral Montreal would have added different ways to how you approach missions, the main ‘shoot and run’ approach that features heavily throughout would of not become as stale and as repetitive as it is.

The main campaign consists of 49 missions and will give you a play through time of between 4-6 hours, which isn’t a great deal for your hard earned cash. Once you have finished the campaign, you then have the option to complete it again with a friend offline or with a friend or fellow gamer on Xbox Live or the PlayStation Network but the issue is, you won’t want to because there is nothing at all new and refreshing here from what there was first time round. You have the option to customise your character and collect XP to buy weapons, but it will feel like an afterthought and something that you won’t really care about once you have completed the campaign the first time.

Army of Two: The Devil’s Cartel could have had so much more if the inclusion of competitive multiplayer had remained in the series, but it didn’t and it’s affected the series in a bad way. EA made the decision of excluding some of the fantastic modes that featured in the original title in the series, Army of Two and its sequel, Army of Two: The 40th Day, opting to concentrate on a single co-op campaign mode. That was definitely a bad decision as it affects the overall quality and depth. Aside from completing the campaign and levelling up with guns, scopes and new outfits for your generic character, that’s pretty much it. The game is so uninspiring the first time round, that you won’t feel like going anywhere near it again. There is nothing of great value to make this an experience that you want to relive.

Army of Two: The Devil’s Cartel had huge potential but unfortunately, it fell short at the last hurdle and in a big way. Not only has the gameplay not evolved (if anything gone backwards in its approach), but the game is riddled with bugs and glitches that should never have been present. The Army of Two series seems to have taken a nosedive and maybe it’s time for the T.W.O operatives to hang up their masks and retreat to quieter climates. It was a fun ride, but Army of Two: The Devil’s Cartel might just be the nail in the proverbial coffin for the series.