It doesn’t seem that long ago since Ubisoft first ushered the significant Assassin’s Creed series into the gaming world. Yet here we are, welcoming the fifth iteration in as many years of the historical action-adventure with deathly whispers of series fatigue and burn-out emanating from the restless gallery. To remedy this, gone is the now iconic Ezio Auditore and his renaissance Europe stomping ground, in favour of a new protagonist and the sprawling lands of colonial America – yet another proverbial hotbed for Assassin-Templar fisticuffs, so it seems. 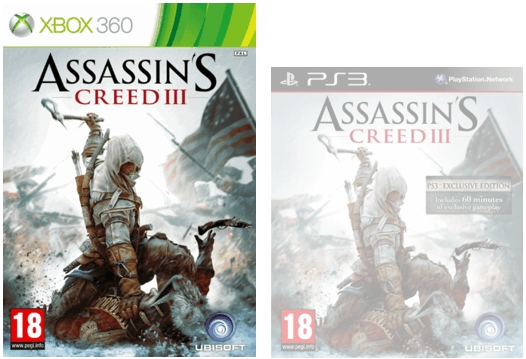 Entering the game you’ll be greeted with a brief recap of events thus far; you’re essentially Desmond Miles, explorer of his ancestral memories and modern day member of the Assassin’s order. On the quest of finding answers to prevent impending world doom, you’ll be vicariously reliving life through Desmond’s vengeful half British-half Native American forebear, Connor Kenway, who himself is out to protect his land and people from the oncoming British Army.

What the Assassin’s Creed series has always done so well is the way it fuses history with fictional tie-ins, often evolving around real life conspiracy theories and myth. The American Revolution provides the perfect backdrop for such inclusions and although Connor’s story merely coincides with it all, knowing what’s at stake between both sides really sucks you into the surrounding drama. It even becomes (dare I say it), educational; the game drops ‘data’ messages when reaching important figures and locations that give the player brief written overview. The texts are quite interesting and often slip into satire and social commentary, meaning you’ll want to read every one, even if it’s just for the laughs.

Unlike the instantly likable Ezio from the past few games, Connor doesn’t quite hit the same level of captivation as the surroundings, often appearing a little disengaged and struggling for charm. Same goes for the people and historic figures he meets throughout his time in the new world, who mostly fail to share the charismatic traits of their counterparts in previous outings – that’s perhaps more of a testament to those games than a detriment to this one however. Without spoiling anything, there is moments that go against the grain and prove otherwise, but overall it’ll be the expansive Assassin’s Creed plot that will keep you enthralled, certainly more so than than the individuals themselves.

Expansive is certainly a word that could be repeated endlessly whilst reviewing Assassin’s Creed III – both the new AnvilNext engine and good audio presentation hold no exceptions. It’s easily deduced from the outset of the sheer amount of bravery Ubisoft must have employed to bring a game of this scope together. Colonial New York and Boston might not have the centre pieces of Istanbul and Rome, but are painted beautifully, bustling with life and meticulous detail. The real star of the show is when you’re let loose onto the frontier; the untouched dense forest land, often christened with snow or wildlife looks simply stunning – the best looking game of the series, no question.

Inevitably ambition does have it’s limitations, at least for the hardware anyway. Despite only being slightly negating to the experience, there’s enough bugs and annoyances to render some of the hard work spent drawing you into the game, a little wasted. Muskets floating in mid air, quirky animations and struggling frame rates on busier scenes were only a few of the eccentricities I encountered throughout my play through. On one part of the game I even witnessed two guards get themselves stuck in between a post and a wall near my exit, eventually forcing me to replay from a checkpoint (a good fifteen minutes of gameplay I didn’t want back).

You won’t find these niggles too detracting – the fact is, the overall experience of Assassin’s Creed III is a very positive one. Plus despite all the claimed improvements, huge dev teams and endless ambition, it still feels like an Assassin’s Creed game at the core; free movement from rooftop to rooftop is still as fun (albeit slightly simplified) as it was the first time round and is extended into the frontier via rocks and trees, which translates superbly well.

Another tweak is how the combat manifests itself. Although it seemed to be heading in this direction anyway from past games, the combat has taken a further leap towards the scripted action fumbles of other titles such as Uncharted 3 and Batman: Arkham City. By tapping the correct buttons as icons flash on enemies heads, you’ll be able to counter, disarm or take hostages to block incoming rifle fire. As you might imagine, the result means that combat feels gorgeously cinematic and brutal. Some might be disappointed with a little of the control being taken away from the player, although unfortunately for those people, this is a stance a majority of the game takes. More than ever, Assassin’s Creed is keen on taking every player down a single, uniformed path so that this cinematic experience remains consistent.

That may sound strange considering the amount of wide-open space and plethora of distractions you’re offered throughout your time in-game. However, you’re rarely pushed towards any of it because of the focus the game puts on the singular story-progressing task. If you are willing to hunt them out on your own accord, you’ll find plenty of activities such as hunting in the frontier; chasing down almanac pages; delivering letters to aid the Patriots; helping the locals escape from the British Army; mini-games; liberating forts and looting convoys – I could go on for a while. Granted there’s a lot of dispensable ‘filler’ in there, but it all adds some welcome diversity to the gameplay of which there is already quite a bit.

The narrative missions themselves are prime example. Some will have you using stealth by sneaking around in grass to avoid patrolling guards or stalking targets across rooftops for example. Of course, there’s plenty of assassinating to be done too. Some even entwined with historic events such as the Boston Tea Party and famous names; George Washington and Charles Lee are two examples.

The game begins in such a slow manner you might mistakenly think you’ve got it all sussed out a few hours in – you’d be wrong however. It’s a good amount of time before you even take control of the main protagonist, then hours later the game opens up even more revealing the slightly odd (but devilishly fun) naval battles and the homestead – your base of operations. Here you’re able to partake in missions that bring more people into your homestead, in turn allowing you to craft new items and sell them for profit via your own convoys. You’ll be able to find recipes whilst exploring, as well as putting your hunting loot to good use. ‘The point of all this?’ I hear you ask. Well, some of it is necessary for progression, other parts like upgrading are not that important due to the reasonable level of difficulty throughout – it’s all an enjoyable inclusion nonetheless.

Longevity is so rife through the main single player that some might overlook the excellent multiplayer portion of Assassin’s Creed III. It continues the same premise that Assassin’s Creed: Brotherhood pioneered of assassinating other players whilst attempting to blend in and remain inconspicuous to your own hunter. Perks and leveling encourage you to come back time and again, whilst co-operative modes create a more friendly social scenario to kill unsuspecting AI controlled characters and accumulate points. Experience is key in multiplayer; knowing when to blend and when to take a risk is part of its charm. The anticipation of finding out if you’ve guessed your target correctly is ultimately satisfying.

Assassin’s Creed III is a slow burner that takes a little time to really get going. Once it does however, the sheer scale of activities to partake in and places to explore in 18th Century America, only hampered by inconsequential bugs and the odd frustrations, mean that overall this package is a genuinely great achievement and excellent value. Assassin’s Creed III hasn’t ventured too far from its winning formula, but has expanded it in a lot of good ways. Have no doubt, Assassin’s Creed III is a showcase title for the current-gen of hardware despite its flaws – and that is in itself one of the biggest compliments you could offer any game.