Like death and taxes, some things in life are pretty much guaranteed. Ubisoft releasing a new Assassin’s Creed game every year is one of them. The latest is Assassin’s Creed: Syndicate, set in Victorian London, looking to right the hilarious technical wrongs of Unity and deliver something special. Less than a year on, does Ubisoft succeed? Well, yes and no. Mainly the latter. 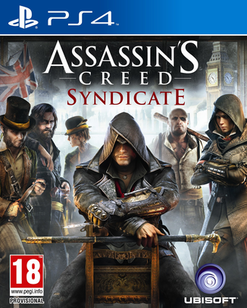 UPDATE 29/10/2015: After spending more time I’ve now added a verdict and score to this review. My thoughts below still stand (please read them for more details) after ploughing more hours into the game. The core gameplay and engine need a year out to add some genuine improvements to what is becoming a repetitive formula.

Assassin’s Creed: Syndicate is at its best when it opens up, giving you full control of how you plan and then eventually perform an assassination. Sadly, there are not enough of these moments. Also, the story and characters are surprisingly decent, with the Frye twins injecting some fun back into the series. Sadly though, the core gameplay and engine issues hold it back from being great.

Note: This is a review in progress. I feel like I haven’t played enough of Assassin’s Creed: Syndicate to give a complete verdict on the game. Once I have this page will be updated with some more thoughts and a score out of ten just like all of our other reviews.

Given the furore around the technical shortcomings of Unity, it’s probably best if I begin by telling you about that side of Syndicate. In a nutshell, it’s a mixed bag. You can tell it’s not 1080p (900p as far as I’m aware) and it’s running at around 30fps. Well, as close as Ubisoft can get to that mark anyway. My main technical issue with Unity was the inconsistent framerate (believe it or not, I didn’t have any other major issues) and it’s improved in Syndicate, but still not exactly stable. When you’re navigating or traversing heavily populated areas of London, the framerate does noticeably drop below 30. That said, that’s the least of the game’s worries.

Unlike my experience with Unity, even after just a few hours of play, I encountered quite a few bugs. Textures and sometimes entire structures popped in after a few seconds, taking me completely out of the section I was playing. Any immersion I had, vanished. In addition to that, on occasion, I witnessed characters floating mid-air before magically disappearing. Even the two protagonists you play as aren’t exempt from strange happenings. Both Jacob and Evie (more on them later) interacted with parts of Victorian London in interesting ways, including standing on a platform of nothing and getting limbs stuck in walls.

Worst of all though, and I can’t quite understand this one, is the fact that Syndicate looks clearly worse than Unity. Characters models look noticeably inferior, looking plastic-like and a tad pixelated when compared to the detailed ones present in last year’s game. The detailed skin and hair textures that were present in Unity are all but gone. It’s baffling. Sure, the game had its share of technical issues, but it at least looked the part. Perhaps the development team reigned to help with overall stability, but given that there are similar issues present in Syndicate it’s hardly an excuse. There’s a clear regression in visual fidelity, and that’s with the first of the two 500MB+ day one patches applied.

Technical stuff aside, in terms of gameplay, Syndicate pretty much continues where Unity left off while throwing some “new” bits into the mix. One of these includes the ability to play as two characters, Jacob or Evie Frye. The Frye twins, as people in the game rather sarcastically refer to them as. Full of wit and charm, these Assassins are out to free London of Templar control. For the most part, it’s the usual Assassin’s Creed set up. You know, Assassin’s v Templars, but Syndicate introduces an interesting dynamic. The ultimate goal for both characters is the same, but their thinking couldn’t be more different. Jacob wants to control the streets of London, whereas Evie wants to go a Piece of Eden. Both viable ways of taking control back from the Templars, but (again) ultimately very different approaches. This kind of impacts the gameplay, but not as much as you’d think. Jacob is portrayed as the brawler whereas Evie is supposed to be stealthier, but in reality there’s not much difference. Evie feels a bit more nimble and Jacob weightier, but there’s very little in it. In the end, it doesn’t really matter who you play as and how you go about it. Even the upgrades for each character are the same, rendering Ubisoft’s different approach for each character pretty much pointless. Oh and the fact that you have to go into a menu to switch between them gets annoying very quickly. Didn’t anyone at Ubisoft play GTA V?!

Anyway, the core gameplay (for the most part) remains fun, but is definitely starting to show its age. If you compare it to the recently released Metal Gear Solid V: The Phantom Pain (sorry, I had to), its mechanics are almost archaic. This applies to the stealth gameplay in particular, where the experience feels disjointed and unfolds like it’s disconnected from the world itself. When everything goes as expected, for the most part, it’s fine (excellent on occasion). However, when you get spotted or mess things up, everything just falls apart. The illusion of this living, breathing world vanishes into thin air. It’s like when I watched The Wizard of Oz as a kid (spoiler) and found out he’s just some old dude controlling things behind a curtain. Playing a huge role in this, the enemy AI is just plain terrible, reacting in a pantomime-esque way when you’re spotted. Even though there are several enemies in one area, only one or two will react to your presence after you’ve been seen. Their behaviour is very rigid, not linked or set up to react dynamically based on what happens. Worse still, other characters will either briefly react to situations before going about their coded routine or just completely ignore what’s happened/happening. The end result is that stealth gameplay, more often than not, feels unsatisfying. There’s no real sense of achievement, nullifying the tagging of enemies and planning you’ve done before via the much improved Eagle Vision.

Hand-to-hand combat does a much better job of things, but falls short when compared to the game it essentially borrows the system from. Yes, I’m talking about Rocksteady’s Arkham series. Syndicate employs a very similar system, even borrowing the counter system, but it doesn’t feel as satisfying and weighty as what’s present in the Arkham games. It’s also tries a bit too much, very quickly. By that I mean, introducing two other button presses for breaking an enemy’s defense and avoiding gunfire. One of the reasons the system in Rocksteady’s games works so well is that it’s kept fairly simple for the most part, introducing new variations slowly rather than all at once. Syndicate throws it all at you pretty much from the off and, while it’s not exactly the most complicated, it can detract from what is actually a solid (if mostly borrowed) combat system. It’s far from bad, allowing you to pile up combos nicely and take multiple enemies down in one fell swoop. If anything it makes you feel more like a badass Assassin than the stealth system ever does.

Another area where Syndicate borrows from Rocksteady’s fantastic series is the introduction of what is essentially a grappling hook. It’s not as robust as the one used by the Dark Knight, but still succeeds in making an already very good aspect of Assassin’s Creed even better. Navigating the environment and traversing buildings in Victorian London is a real joy, one of the best aspects of Syndicate. Without the grappling hook it can be a little tricky to get around at first, just like it was with Unity, but after an hour or so you’ll get used to it and be climbing up/down like a pro. When you do get the hook, it just makes things a whole lot easier. Well, less that, more convenient. Unlike Unity, you can get from one end of the map to the other pretty quick, while looking rather cool too might I add. It really is a lot of fun just gliding and jumping around good old London and taking in the sights. Yes, that includes Big Ben! There is so much to see and do, most of it laid out better and more strategically/logically than Unity.

Missions aren’t dramatically different to Unity, but the format is tweaked just enough to keep things interesting. More often than you’ll be doing the usual Assassin’s Creed thing in that you’ll be climbing, watching and then eventually stabbing someone, but there is some variation in between. Apart from assassinating several Templar leaders (eventually getting to the head one), you’ll be tasked with regaining control of the different boroughs of London by doing an assortment of different tasks. This can range from rescuing children from slavery to fighting with big gangs and their leaders. Along the way you’ll meet a host of helpful and interesting characters, most of which will take the form of actual historical figures such as Alexander Graham Bell and Charles Dickens. This is the stuff Assassin’s Creed has done continually well and the same applies here with Syndicate. I haven’t completed the story yet, but it seems pretty interesting and I’m looking forward to seeing where it goes. It’s just a shame that the core gameplay is starting to show its age and crack under the pressure of a quick development cycle. Maybe it will get better as I progress further, but with around ten hours put into it so far I’m not betting on the gameplay changing too much from what I’ve experienced so far.

Assassin’s Creed: Syndicate is a decent game, let down by its creaking core gameplay and engine. While the combat isn’t too bad, the stealth is pantomime-like at best. Combine that with repetitive missions and it’s not a great mix. Just like Unity, the open-ended assassination missions are the highlights of the game, but there’s not many of them. These missions combined with the story and characters are its saving grace. It’s time for a year out for Assassin’s Creed, otherwise that score below will inevitably get lower and lower.