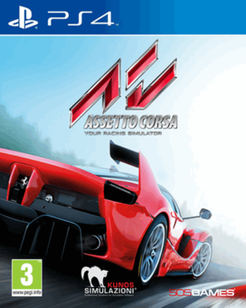 Driving Simulators is an interesting genre for me. I spent hours, days, weeks and months playing the good old Gran Turismo titles right back on the PlayStation One. It had a sense of achievement as you build up your garage, starting from a below par car right up to a beast of a machine where you’d fly through the races, leaving everyone to just watch you pass them by. Assetto Corsa aims to be the next big thing in terms of driving simulation, and had got a very good reception when it was previously released on PC. Would my time with it re-ignite my passion for the genre? Not as much as I would of hoped….

I think the first thing that stands out with Assetto Corsa is the just the content, or lack of should I say that is offered to driving enthusiasts. One of the most disappointing aspects in the game for me was the Career Mode. It has next to no progression in it. You bascially have a series of events, split up into 5 different events in that one. You simply complete each tier in the event to unlock the next one. If you don’t want to bother progressing, most of the Career Mode events are also available in the Special Events section on the main menu. I would of really liked to see a deep career mode that is present in the likes of Gran Turismo and was left sorely disappointed with what was handed to me in Assetto Corsa.

Visually, it is most what you would come to expect in a driving simulator on the PlayStation 4, and Assetto Corsa doesn’t disappoint in that respect. Each car is detailed so much, right down to the spokes on the wheel. When playing these sort of games, I love the view from inside the car, the cockpit view. This was one of the most impressive things personally, as I felt that Kunos Simulazioni put real effort into it. Each of the tracks also look really nice, especially running at 1080p. I did however notice a little bit of slowdown at times, especially in races against the computer. Whilst disappointing, I am sure this will be eradicated through patches in due course.

One thing you must know and be well aware of in Assetto Corsa is the difficulty. It is extremely hard, with no tutorials at all to help you get to grips with the mechanics of the game. As soon as you start the game, you’re very much expected to ‘know’ how the cars work, which very much frustrated me a lot of the time. Even with assists on, I was spiraling out of control, not reading the turns correctly…. maybe it’s good I don’t drive in real life huh?! Again, I hate to use Gran Turismo as a comparison, but the way that the game sets our license tutorials really helps you get to grips with the overall mechanics. To be quite honest, this criticism may be something that the developers did on purpose, but then it only caters to the hardcore. It definitely would of been nice for it to be more accessible to novices or those who haven’t gone near the genre for a couple of years like myself. You can put it on ‘Easy’ if you feel that will be any easier but to be quite frank, it’s really not!

If you can get past the extremely hard difficulty curve installed with this game, there is a lot of fun to be had with Assetto Corsa. You can really feel the different weights of the cars. The slower cars are really difficulty to turn; you really need to think before turning. Even when you brake before a sharp turn, it’s almost a chore to turn the car in the required direction without just failing and sending your vehicle into a spin (it is infuriating when you are trying to build points and lose them all in a second just by one bad move). Obviously everyone wants to control the fast BMWs, but trust me, that isn’t so easy either! The fast speeds on offer from the car will mean that you need to be extra careful in your movement. Try and turn a little quickly and your car will completely go into some hyper spin.  I suppose it’s realism of the highest point, but there comes a point in this game where frustration and realism come into the same bracket!

Assetto Corsa is definitely a solid driving simulation. Although it is let down by the lack of content, this is definitely one of the most realistic simulators around. I tend to prefer a little more fun, and if not, would like a bit more help in terms of tutorials on offer which I mentioned above. I think if you had a decent steering wheel, that is where Assetto Corsa could become one hell of an experience. If they do plan on doing a second one down the line, a more complete and meaningful Career Mode would definitely mean a higher score from me. Assetto Corsa is more frustrating than anything, and one that is only for the very hardcore driving fans out there.