Delays on public transport. Voice recognition software when you’re trying to order cinema tickets over the phone. Coldplay. Let’s face it – there’s plenty of things out there in the world that drive people to bouts of rage. But when it comes to letting that rage out in truly spectacular fashion, few can hope to compare to the new man in town – Asura. 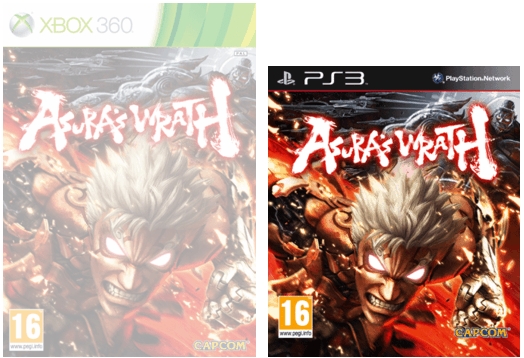 Formerly one of the eight ‘Guardian Generals’, Asura and his demigod colleagues sought to protect the world and heaven above – their attempts manifested in their attempts to quell the Gohma; an army of dark and destructive monsters. Yet amidst this war, Asura falls foul of a trap set to frame him for the murder of the Emperor – a plot he soon reveals to be hatched by his own colleagues. Witnessing the death of his wife, and the kidnapping of his daughter, Asura unsuccessfully confronts his former master, only to be discarded to an unknown planet and left for dead. Not one to take things lying down – for too long, at least – Asura eventually awakes from his beating some 12,000 years later, swearing his vengeance on those who have wronged him.

Whilst far from exceptional in terms of the narrative itself, the method of delivery is perhaps one the most standout parts of Asura’s Wrath as a whole. Taking very direct inspiration from televised anime in Japan, the game is split quite regimentally into episodes – each marked very clearly by an introduction, credits rolling over the start of each, a cliffhanger “to be continued” ending, and even visual segues to and from a non-existant ad break in the middle. It’s impossible to overlook, and despite the reference being lost in translation to many players, it’s innovative enough that it gives off a charm that is mercifully universal. Fancy presentation aside, the moods of the game are very clear and worringly appealing too – aside from some short-lived dabbling with tongue-in-cheek humour, and between the brief moments of calm slotted in here and there, there’s no avoiding that this game is all about Asura and his unquenchable rage.

Not content with merely playing out like an anime, the visuals keep this ideal close to heart too, with the game’s over the top world keeping the pace wonderfully and never hanging on one aesthetic too long. Locations create a captivating blend between more traditional Japanese designs and highly futuristic cyber-cities – and despite sounding like polar opposites, the whole piece is enaging enough to pave over any cracks. There are moments when the game does struggle to keep up from a technical perspective – either demonstrating slowdown or the odd bit of texture pop-in – but these are minor, and easily overlooked.

In terms of character design, the ensemble of remaining deities make up the most significant part of the cast. These are as stereotypical in their looks just as they are in their mannerisms, and whilst they all stand out from one another succesfully enough, none are of particular note away from the context of the group. Not that this particularly matters, as on the other hand, Asura himself is quite something to behold. Each twist of fate’s knife sees him battered and broken to various mental and physical degrees, where typically his outward appearance is altered more by the former – where as his wrath grows, so does his power. Whilst the muscle bound physique remains even when at his most human, the progression from an almost regular-looking Asura to a white-eyed, six-armed demon is often quite a joy to behold.

With the episodic nature of the game lending itself to repetition of some numbers, it’s a relief to say that the music is actually strong enough to make this a plus point. Keeping far closer to the traditional Japanese elements seen elsewhere, with even some authentic instruments being used, there’s a strong preference for slower, more dramatic numbers, which carry the action along with a powerful grace. Demonstrating this point nicely, there’s even a few classical pieces from the western world slotted in for good measure.

Voice acting is less classical in nature however, and fits the larger-than-life bill much more closely. Subtlety is gone with the wind, with guttural screams and brash shouting being the staple punctuation to the dialogue throughout most of the game. Whilst it’s not doing anything oustanding or brave, it’s effective at getting the moods of the game across, and it certainly ties up neatly with the visuals and the action on screen.

For a game so jam packed with action, it may come as a surprise to find just how large a portion of it is automated. QTEs – the bane of many a gamer – make for one of the game’s central mechanics, with a generous portion of each and every chapter being made up of a variety of these. It’s fair to say that there are some actually quite clever and amusing examples of these, but these are exceptional cases rather than the norm – there’s just as many examples which require repeated hammering of a single button to progress. The worst thing about these scenes in general is that in the rare example when you do fail one, very little seems to change – perhaps a slightly less positive scene plays out afterwards, but there’s little in the way of consequence for your failings.

Away from the cutscenes, there’s two other main types of gameplay segment that you find; shooting sections, and melee fighting. Both are presented with a series of guages to focus on, the most prominent of which being your health meter (self explanatory) and your burst meter. Causing damage of any kind raises your burst meter, and once this fills you’ve essentially won; activating this will typically slingshot you headfirst into a new QTE leading on to the next segment of the game. In summary – make sure you’re filling this guage at a quicker rate than your health is being whittled away, and you can do little wrong.

The shooting sections give you some ability to move about, but are typically attached either to static battlegrounds or sections of game that are kept entirely on rails, with the focus instead being on quick and accurate positioning of your aim reticule. Incoming obstacles can be shot down instantly with your auto-fire, but clearing the enemy lines out is more about locking onto numerous targets and unleashing a grouped lock shot that increases in power dependant on the quantity of lock-ons – giving it a rather distinct flavour of Rez, minus any hint of rhythmic necessity.

The melee combat undoubtably makes for the most involving sections of the game, and whilst there’s been some attempt to channel some of Capcom’s previous Devil May Cry magic, there’s no hiding that it’s been watered down to a fraction of what it once was. Large-scale brawls rely more on crowd control and dodging any incoming blows, whereas the one-on-one fights fit more to pattern analysis: watching and waiting for gaps in their attacks before swooping in to deal as much damage as possible. There are some neat tricks possible in either setup, but given how fleetingly these sections fly by, there’s really no room for showboating – nor any need for learning anything too complex.

Undoubtedly one of the game’s weakest areas, the length of the main game is disappointingly short, with a first run likely to take somewhere between six and eight hours. Of course there are incentives to replay – better grades to attain, higher difficulties to best, new handicaps to test your mettle – but none of these are as inspiring as they would like to be. Even if you were to go about these, skipping each of the cutscenes exposes just how little meat there is on the bone too, with most of the episodes shrinking in duration to a rough factor of ten.

Unsettlingly light on the gameplay front, there’s no hiding the fact that there will be some players who will find Asura’s Wrath detestable on principle. Some of the game sequences certainly meet the grade, but they’re too few and far between – padded out by cutscenes and QTEs you’re unlikely to want to repeat a second time over. Yet despite these shortcomings, it’s hard not to celebrate what it does do well – in particular its expertly mimicked, and cleverly adapted evolution of anime as a medium into an interactive format. It’s just a shame the interactivity wasn’t driven in a bit further – especially as doing so might have turned this from an appealing curio into a ground-breaking smash.