The Batman saga continues in the tail end of the console generation with Arkham Origins, a prequel to the exceptional Arkham Asylum. With Warner Montreal taking over development duties, how does Origins fit into the overarching storyline of the Dark Knight that Rocksteady crafted so well? Is it worthy of the name? 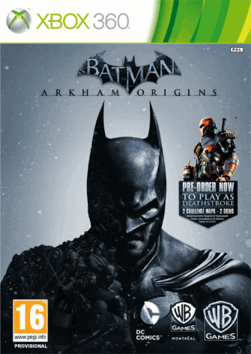 It’s Christmas Eve in Gotham, and Batman’s got a price on his head. A $50 million price, to be exact, placed on him by criminal mastermind Black Mask. Eight of the world’s deadliest assassins have been attracted by this enormous bounty, and set about trying to claim the reward. The story begins as Batman attempts to evade and defeat them all, but takes a slightly more sinister twist as some more familiar faces become involved with Black Mask’s plot and try to throw Batman’s plans into chaos.

Batman aficionados will enjoy the story’s trip through Gotham, as you venture into many of the interiors of the city’s buildings, from the GCPD headquarters to Blackgate Prison and beyond. It’s a tight story with some good performances, most notably Troy Baker, who encapsulates a younger version of Mark Hamill’s deranged Joker perfectly.

Arkham Origins doesn’t really push too much on from the previous title in the series when it comes to the graphics. The environments by and large look great, with the constantly falling snow being a brilliant added effect. Detective Vision is still a great way to check out your surroundings and plan things, and it’s displayed in the typical black/blue/orange colour wireframe colour scheme. Batman’s cape & armour become weathered and beaten throughout the game as and when you die during combat, leaving a permanent reminder of just how often you’ve succumbed to the beatings of the hordes of criminals that patrol Gotham’s streets.

Whilst it does look impressive, there are some niggles. Character models are repeated to a worrying extent, and one scene in particular sees you speak to the same body with different voices across multiple floors of a hotel, and even in separate buildings, all within minutes of each other. It’s a disappointing problem that breaks the immersion that the other aspects of the game attempt to convey so well.

The frame rate during gameplay is solid, with a couple of hitches coming in during some of the cut scenes. There are a number of occasions where the camera angle seriously hampers the gameplay, including some bizarre choices of forced changes that focus the camera on an area of the map that doesn’t bear any relation to any objectives you currently have. It’s an annoying flaw that at best is mildly annoying, and at worst threatens to hinder progress in the game.

The first thing I should say about the sound is that you need to check your settings! By default, the game assumes you have a home theatre set up. If you don’t, then you could miss out on important dialogue as it gets lost in a mix that doesn’t apply to a stereo setup. With that out of the way, the overall sound of the game is impressive. Enemies chatting over the radio as you fly over their heads certainly helps to give the impression of a city teeming with crime, and much like the visual effects of the snow falling, the howling wind really adds to the general atmosphere.

The voice acting is predominantly split into two camps. Genuinely brilliant and utterly terrible. Roger Craig Smith does an admirable job as a younger Batman, with the likes of Bane, Deathstroke and Black Mask all coming across strongly as well. Then you have the likes of the Penguin’s gang. I like Nolan North as much as the next guy, and his performance as the Penguin in Arkham City was tolerable at best. However, Arkham Origins complements this with the insufferable Tracey, whose godawful “Cock-er-knee” accent makes Dick Van Dyke’s sound fantastic.

The absolute standout, as already mentioned, is Troy Baker’s stunning turn as the Joker. The build up to the first meeting between the Bat and the Clown is made by Baker’s performance, and after that initial scene, he revels in the insanity that he provides and goes totally off the rails with it.

The same gameplay that’s made the series so enjoyable returns in earnest with Arkham Origins. This is, however, a blessing and a curse. Whilst the air of familiarity helps to get into the flow of things early on in the game, the sheer repetition of a number of minor tasks becomes tedious and frustrating very quickly. There are only so many times that repeatedly hammering A to pull a grate off the wall can be remotely interesting. Most of the puzzles in the game can be solved by entering detective mode for a few seconds, finding the grate you need and repeating the task yet again. It doesn’t really do a huge amount to push anything forward, nor does it develop any of the existing aspects enough to a point where it feels engaging. One niggling thing is the inclusion of things from Arkham Origins that were not featured in Arkham Asylum, such as the remote claw. From a timeline point of view it’s certainly confusing.

With that being said, the free-flow combat is still superb. Once you’ve got your head round the basics, there’s nothing more satisfying than pulling off a 50+ chain of attacks that leaves a trail of enemies in your wake. Sadly though, even this gets overused, to a point where the game’s idea of difficulty is to just throw more enemies on the screen. It’s not challenging, it’s downright annoying at times.

The boss battles in the game had the potential to be exceptional as well. With eight assassins to choose from, the setups come from really good ideas. Sadly, they devolve too often into quick time event fuelled tedium. One battle in particular had a stunning premise, with a great antagonist, but ended up being a typical “Hit them 3 times with this, then this, then this” affair, and was ludicrously simple.

Whilst I’m on the subject of boss battles, quite why the dev team felt the need to put button prompts for simple actions on screen during one of the final fights in the game is absolutely beyond me. Some of the actions required were things that you need to do in the first hour of the game to progress, and by the time the fight came along, had been done a thousand times or more.

There is a truckload of side stuff to do in Arkham Origins. Running after criminals, VR training, cracking codes to access areas of the map for the Batwing’s fast travel, and the neat new “Crimes in progress” mini-missions. These will occasionally pop up on the map and give you a small crime to stop. There’s also a multiplayer component to the game, but this has not been tested as part of the review. There’s a New Game Plus mode, as well as the “I am the Night” mode, which gives you one life to complete the whole game. A daunting task, no doubt! There’s plenty for bat-fans to get stuck into here if they see fit to.

Arkham Origins is a frustrating experience. It aims to be a sequel to Arkham City and a prequel to Arkham Asylum, but ultimately it falls short with both goals. Somewhere inside Origins lies a fantastic game, but it’s buried with several big issues surrounding the gameplay. When a semi-open world series relies so heavily on repeatedly hammering the A button ad nauseum to progress, it’s probably time for a reinvention. If this was the first game released in the series, it would easily have scored much higher, but when it’s following two fantastic games, it’s not doing enough new to keep this fan interested. Troy Baker’s Joker and the general story make this game worth a play through, but I’d advise waiting until the price drops.