The first wave of VR has a lot of expectation on its shoulders. Touted as a concept for as long as videogames have been around, the idea of throwing on a headset and being able to completely immerse yourself in a virtual world has been a tempting one for years that was never fully realised. And now here we are, standing on the edge of the release of the very first genuinely affordable console headset, the PSVR. It’s interesting that one of the lead titles is an update of arcade mainstay Battlezone; a wireframe tank shooter that, while impressive at the time, nevertheless left you with the feeling of battling slow, aggressive, green pipe-cleaners in space.

Disclaimer: Review may be updated over time as we gets more hands-on with the game. We had a lot of PSVR coverage to get through so we plan to revisit this review if our thoughts change at all. 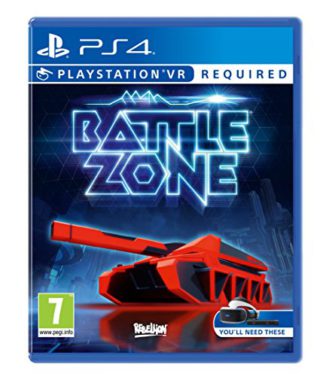 If you don’t remember the original Battlezone then don’t fret, just think of an older version of Cyber-Sled on PS1. If you don’t know Cyber-Sled either then don’t fret because…. all my references are very out of date. Anyway, it seems the cycle of tank-battle games has spun around and we now have Cyber-Sled/Battlezone again, a genre that seemed to be largely forgotten and resigned to arcades and memories. But it’s no surprise that this has happened; human movement in VR is difficult, mainly due to space constraints and the huge potential for motion sickness when turning naturally. Staying sat down, or stood still, and pivoting using analogue sticks to pilot a thing that moves rather than moving yourself, is incredibly immersive, especially in a title like this.

It’s possible that the team behind Battlezone were aware that this was a forgotten genre when bringing us this title, as visually everything here is fittingly retro. Bright, bold primary colours dominate the vehicles and there are some serious 80’s war-game stylings. The real masterstroke here, however, comes from the feel of the cockpit. A huge part of VR is how believable the experience is, and how possible it is to lose yourself like Eminem in a really big supermarket. Battlezone tackles this very well, done mainly by the feeling it provides of being cocooned in the bowels of a powerful war machine. Whereas many games are trying to impress players with huge, open spaces, the confines of the inside of your tank feels both snug and restrictive, but in a good way. As you glance around you’re greeted with all the minor details, switches and flashing lights you’d expect, surrounded by instruments and armour, viewing the battlefield only through your windscreen. Obviously, it’s easier to make someone believe they’re driving an armoured vehicle than it is to make them believe they’re Batman, especially when you’re using analogue sticks to move around, but this makes the whole experience no less impressive.

This is all achieved despite the somewhat gaudy colour scheme. While the arenas are fairly monochrome, enemy and allied vehicles are all decorated in those famously popular war colours of bright red, blue and yellow. I don’t feel the concepts of ‘camouflage’ or ‘stealth’ have reached the Battlezone universe yet. Either way, this does at least make it easier for you to spot what you’re supposed to be firing at, in conjunction with the radar just below your windscreen.

And what of this VR cannon fodder? Well, admittedly it’s not terribly imaginative, mainly just nondescript tanks, turrets and the odd flying thing to topple. It is worth pointing out, in the interests of full disclosure, that I have not completed the game, however. Due to the sheer number of VR games we received for review (I know, ‘first world problems’ and so on) and in the interests of hitting embargoes, I played as much as was possible but not as much as I’d usually like to before putting pen to paper, or finger to keyboard. And while the enemies are a little one dimensional, and there also doesn’t appear to be any story bar ‘tank go shoot things’, the game’s missions are at least diverse, ranging from standard open battles to hacking games and clearing minefields. The map on which missions are presented to essentially looks like a green Blockbusters board; a patchwork of hexagons which you move through sequentially, moving on to an adjoining territory until you eventually clear the board. You don’t even have to actually complete each mission to be able to move to the next section, although this may be a bold move as the difficult level does step up considerably, and you will likely be left behind if you don’t accumulate the necessary skill, or weaponry upgrades, to compete.

Arguably, the lack of story and directive is symptomatic of the problem the current wave of VR is facing. Many of the games that the NGB team and I have played thus far tend to be focused on short stories or giving ‘experiences’ rather than in-depth quests. I’m not sure if this is necessarily specifically a VR problem, or just where games are going in general when you consider the success of mobile gaming, but it’s actually something that’s yet to bother me. While the PSVR is lighter and more comfortable than its more expensive counterparts on PC, the idea of being cut off from reality for longer than, say, an hour at a time doesn’t really appeal. As much fun as I’ve had with some of these games (honourable mentions to Tumble VR, Arkham VR and The Robinson Journey in particular), they’ve all seemed to suit that short, bitesize format, and I’m yet to come away from anything thinking that it could have done with another 10 hours of gameplay.

And Battlezone fits into this perfectly; it is basically what you dreamed an arcade game would be ten years ago, finally realised and in your living room. A dumb, no-frills tank blaster that is instantly playable and understandable by anyone, this is the sort of thing that will win over a lot of people who wouldn’t consider themselves interested in VR as a concept. Unlikely to be a defining title of the platform, but a strong start regardless.

Rough approximation of a human. Reviews and Features Editor at NGB.

No offense, but this is a really weird review that lacks focus and depth. Remember, Battlezone is based on the *arcade* game. I’m old enough to have played it when it first hit the arcades. Guess what? Arcade games like Battlezone didn’t have a storyline then, and they don’t need… Read more »

Hi there. Yes, part of your assessment is indeed correct. As it says at the top of, and within the review, this is very much ‘in-progress’ because we had a lot to review in a short space of time, and obviously only one headset. Reviews are subjective and I tend… Read more »

As well as the conversation on twitter, I feel the need to step in here. It’s stated that it’s a review in progress, and the author discussed the score with me. I’ve played a little more than he has, and I fully agree that 8 is a fair score for… Read more »

This review did not mention how many pages the manual is, unacceptable review I give this review a review of 3/10