The Best Songs With Videogames In

If the expansion in social media and available information has taught us anything, it’s that famous people are just like you and me. They say stupid things, breathe oxygen and even sometimes play videogames. But what can we learn from the times when our favourite song-people reference their favourite console adventures in their work? Well, probably very little, but let’s try anyway.

(A while ago I wrote about the best times when musicians appeared in videogames. This article you’re about to throw your eyes at is the inverse of that, because I am a man with very few ideas).

While you may have thought that last year’s surprise album Lemonade provided an insight into the private lives of pop music’s biggest power couple, the revelation that she is an X-Box woman is by far the more damaging admission. She also makes reference to how her opponents “didn’t even put up a fight”, suggesting people were just letting her win on Microsoft’s flagship shooter. I too would probably let Beyonce win at X-Box because I’ve seen that gif where she smashes a car window with a baseball bat.

Bey’s Xbox victory celebrations really got out of control

American Hi-Fi – Flavour of the Weak

The ‘he’ referred to in the song is some poor dear’s boyfriend who isn’t paying her any attention and is instead doing recreational drugs and playing video games. There’s a Bowling For Soup song called Punk Rock 101 which parodies these template pop-punk ballads, a parade of stories about dysfunctional relationships, usually with the singer looking in a metaphorical window and thinking they could do a better job. Either way, this song came out in 2001, so the Nintendo in question was very likely an N64. If only the boyfriend had opted for a Saturn instead, he’d probably have been far less distracted by video games and would have had more time for his lover. Because Saturns were rubbish.

Key Lyric: “Come back stronger than a powered-up Pac-Man”

There was a point where the Kaiser Chiefs seemed like a genuinely exciting band; a riot of joyous indie tracks crammed full of pop-culture references, such as this prominent early single. While Ricky Wilson became another insincere addition to spinning judge-fest The Voice, this was where it more or less started. I’m not convinced there is such a thing as a ‘powered-up Pac Man’, however. The pick-ups in Pac’s world seemed to make the ghosts weaker, rather than the chomping right-angle stronger. This sort of oversight shows a lack of attention to detail that would soon become the least of the Chiefs’ worries.

Good at coordinating their clothes but fucking bad at Pac-Man

Admittedly, I don’t imagine many people have heard of this unless, like me, you spent most of your teenage years going to Kung Fu Records gigs and pretending you were old enough to be there. Nevertheless, this is a track which makes some fairly spurious comparisons between a failing relationship and playing Nintendo, much as Flavour of The Weak does earlier up this list. I’m not quite sure why Nintendo is so heavily associated with familial dysfunction and Sega gets a free pass. Having said that anyone who’s watched online porn will know what happens when you bring a plumber into the house, so that could be it. The randy, moustached sods.

Podcaster, rapper, UFC pundit and general Essex-based Rennaisance man Scroobius Pip bemoans the death of Sega, blaming the entire debacle on Ecco the Dolphin. While I’d never really considered this before, now he mentions it it was all a bit contrary to their ‘coolest kid on the block’ image. For the console that gleefully let you spill blood in Mortal Kombat and celebrate stoner culture and jazz-funk with Toe Jam and Earl, a game where you play a dolphin is actually quite ‘safe’. If you’d never heard of Ecco you’d probably align it more with Nintendo’s family friendly shtick than Sega’s, but here we are. Destined for a digital can of tuna somewhere.

5/10 because it’s still too soon to be reminded of the sad demise of Sega. Such hopes, such dreams. Such hedgehogs.

House of Pain – Jump Around

Key Lyric: “Trying to play me out like as if my name was Sega”

Easily the worst grammar of the list thus far, here we see everyone’s favourite Irish rap crew reference the fathers of Sonic The Hedgehog. Sega have recently announced a new Sonic game, met with the sort of shrug that could dislodge the earth from its axis. I suppose being played like Sega these days probably means ‘with general indifference and a vague memory of when this was better’.

4/10. Look I promise this whole thing isn’t just a veiled dig at Sega. 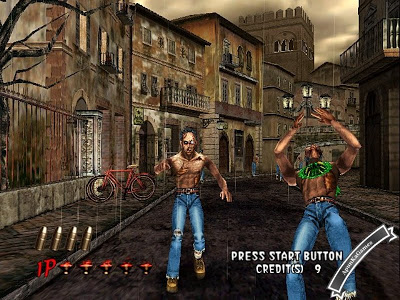 I couldn’t find a decent picture of House Of Pain, so here’s a screenshot from the Sega game House Of The Dead. Near enough.

The Streets – Has It Come To This

Key Lyric: “Sit back in your throne, turn off your phone/cos this is our zone/videos, televisions, 64s, Playstations”

The Streets, a.k.a Mike Skinner, who appears to have not just one but MULTIPLE N64s and Playstations to hand. We all know rap music is about boasting of wealth, but is there any actual point in having more than one of a console? He’s just showing off, frankly. This is the problem with British rap; Americans are boasting about how many cars and women they have and all we’ve got is “Ooooh, I’ve got three N64s”.

8/10, huge tune but let down by Skinner’s reluctance to pledge allegiance to either Nintendo or Sony, instead hedging his bets like a turncoat.

So that’s it. What did we learn from that? Nothing, mate. Sometimes people mention videogames in songs, but not often enough to get an article of a decent length out of. Beyoncé wins because of course she does, her photos at the top of this thing innit?

Rough approximation of a human. Reviews and Features Editor at NGB.