David Cage and Quantic Dream return to the PS3, alongside a couple of Hollywood A Listers, with Beyond: Two Souls. This tale of the paranormal stretches the PlayStation 3 to its technical limits, but does it stack up well as a complete package? 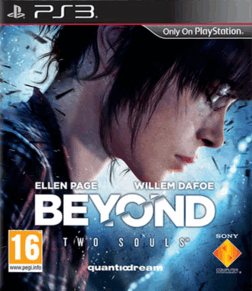 (Review code provided by publisher for PS3 and PS4 versions)

As Beyond: Two Souls is now out on the PS4, I made a decision to update Ben’s PS3 review with my thoughts. The score will remain exactly the same because the game is still fantastic. I completely agree with Ben’s original review and score, his thoughts about Beyond: Two Souls completely mirror mine. Gameplay remains pretty much the same, but there are a few little tweaks here and there. Some of the actions sequences later in the game are a bit harder and the controls have been adjusted ever so slightly. Both changes take nothing away from the game, instead they improve the overall experience. Not a huge amount, but the added challenge and more involving controls during these intense parts of the game are certainly welcome.

Elsewhere, at the end of each scene you’re now greeted by a screen that highlights the choices you’ve made and compares them to other players. If you’ve ever played any of Telltale Games’ episodic offerings or even Life is Strange, you’ll know exactly what to expect. Given that Beyond: Two Souls is similarly heavy on the narrative and choices, it’s a natural fit. You can now see the other decisions you could’ve made, enticing you to come back for another shot at the game or (at the very least) specific scene. The best addition is the ability to now play the events of Beyond: Two Souls in chronological order, seeing how Jodie progress from child to adult. I’d still recommend playing the game how it was originally intended (slightly better impact), but if you’re not a fan of non-linear plots then the option is there.

Being a remaster though, it’s the upgraded visuals where the game benefits the most. The sharper visuals are definitely noticeable thanks to the 1080p upgrade. Everything looks that little bit better than before, with details such as skin textures and snow in the environment looking lovely. The improved lighting and shadows are also clear to see. Framerate is locked at 30fps, never dipping below that and providing a smooth experience throughout. Aiden’s audio coming through the DualShock 4’s speaker is another nice touch, giving you that sense of him being a separate entity as you play. Clever.

David Cage and Quantic Dream games divide opinion at the best of times, but you can’t knock them for trying something different. Beyond: Two Souls is no different. You’re either going to love it or hate it. Ben and I both reside in the love it camp. A slightly bonkers, story driven game, you’re unlikely to play anything like it. If you haven’t played it before and like the sound of Ben’s original review (below), I can’t recommend Beyond: Two Souls on the PS4 enough. The definitive version of an excellent PS3 game. Buy it.

First and foremost, I should say that I thoroughly enjoyed Heavy Rain. Quantic Dream’s alternative approach to games (Or “interactive entertainment”, as they put it) is not for everyone, but I find it extremely effective.

Beyond: Two Souls charts the early life of Jodie (Ellen Page), and a mysterious spirit named Aiden, who is somehow connected to her. The story jumps between times in Jodie’s life, from her childhood through to adolescence and further. From a very young age, Jodie is kept under the watch of Nathan Dawkins (Willem Dafoe) at the Department of Paranormal Activity in order to further understand the relationship between her and Aiden. Throughout the fifteen years of Jodie’s life that you play, you experience the typical ups and downs of young adulthood, but with the added presence of a temperamental ghost thrown into the mix as well. The writing is much better than that of Heavy Rain, and the performance capture is absolutely superb, with Dafoe and Page as the obvious standout examples.

Whilst the latter stages of the story start to delve into slightly silly territory, it never gets too ridiculous, and ultimately, it’s a supernatural story about “a girl and her ghost”, so expect the twists and turns to be quite severe! In terms of where the story goes, there are some genuine scares and creepy moments to be had, and at times it feels a bit like a survival horror game. One scene in particular reminded me of the tension and suspense of Dead Space, which I certainly wasn’t expecting going into the game! In addition to this, the pacing is excellent, with the “older” Jodie scenes never letting up until you hit the end of the chapter and get thrown back to a previous point in time. At times, the jumps between different eras of Jodie’s life is slightly disorientating, but it ultimately works really well. I would like to have seen an option to play through in chronological order once the game’s finished, but it doesn’t seem to exist, which is a bit of a shame.

Beyond looks incredible, there’s no two ways about it. It is easily one of the best looking video games that has ever been released on a console, and that is largely down to the type of game that Quantic Dream create. It’s more of a “guided experience” than a typical game, and as such there is much less of a sandbox to create than a lot of other games. However, as stated, it looks spectacular in places. Some of the environments are simply breathtaking, and the detail in the characters’ faces is simply astounding. Water and tears roll down people’s faces and bodies with impeccable detail, and the general atmosphere of the game is helped enormously by the graphical fidelity.

From a purely technical side, Quantic Dream have definitely learned lessons and vastly improved the already impressive technology found in their previous outing. There is none of the screen tearing that plagued Heavy Rain, and there are only a couple of times when the frame rate drops a bit, particularly during one really busy chapter, but thankfully these incidents are few and far between. They really have pushed the console to its absolute limits, and alongside Naughty Dog, have showcased what Sony’s machine is capable of, in spite of being in the shadow of its looming bigger brother.

The first thing to say about Beyond’s sound is that the voice acting is leaps and bounds ahead of Heavy Rain’s. Conversations sound much more natural, with dialogue options sounding less jarring and more free-flowing than its spiritual predecessor. The one tiny thing that does grate though is the fluctuating pronunciation of Aiden’s name. One minute it’s “Eye-den”, the next it’s the more traditional “ayy-den”, but that’s not game breaking by any stretch of the imagination.

Elsewhere, the sound design is solid. Soundtracks kick in at all the right moments, the atmospheric sounds help to flesh out the world, and the tension is certainly heightened in some key scenes, providing a thrilling sense of dread and claustrophobia at times.

As mentioned in the first paragraph, Quantic Dream’s approach to games is not a common one. If you’ve played Heavy Rain, you’re in for more of the same with Beyond: Two Souls. However, that is by no means a bad thing, as the sometimes clunky mechanics from Heavy Rain have been refined and streamlined to within an inch of their lives. Interacting with objects in the world is now primarily done with the right analogue stick, with button prompts occasionally flashing up on screen to carry out other actions, as well as getting rid of the ridiculous requirement to hold down R2 to walk. It makes for a game that is not only better to play, but also more accessible, which leads me nicely onto my next point.

For the first time in seven years, my partner played a video game with me. And enjoyed it. Alongside the game, Quantic Dream have developed a mobile app, enabling users to turn any iOS or Android device into a simple controller for Beyond. You can either play the full game on your own on your phone or play in co-op, with one played taking control of Jodie, and the other filling the role of Aiden. It works incredibly well, and opens up a new avenue to people that want to get involved in gaming but find the barrier of controllers a burden. My partner thoroughly enjoyed being able to play Beyond with me, and that is a credit to the story and the simpler interface and control options offered by using a phone.
All in all, it is a much more accomplished game than Heavy Rain, with a far better story behind it as well. My only complaint with the gameplay is that it never saved my control options, so I had to manually change those every time I booted it up, but hopefully this is something that can be rectified very simply with a patch.

There are a number of different endings to Beyond: Two Souls, which will require multiple playthroughs to achieve. For most players, it will probably be a “play once and that’s it” experience, but for completionists and trophy hunters, there’s a huge well of content to draw upon. The main story is plenty long enough, and will keep you hooked throughout.

Beyond: Two Souls is another stunning example of the types of risks Sony is taking right now. Quantic Dream have taken everything Heavy Rain put on the table and refined it to perfection, creating a deep and engrossing narrative that twists and turns its way to a satisfying conclusion. A truly engaging experience from start to finish, Beyond: Two Souls is a superb title, and yet again, Quantic Dream are at the forefront of pushing the boundaries of interactive entertainment.

(This review, both the written text and score, cover our thoughts on the PS3 and PS4 versions of Beyond: Two Souls)