Aniiiimmmeee! The sarcastic cry you often hear when wafting through fighting game tournament streams on Twitch by the army of “stream monsters” awaiting the latest Street Fighter IV tournament. They would have you think that no one is interested in this sub genre of fighting games and, in what is more often the case than not, they are wrong! Arc System Works have found a reason to get their latest iteration of the BlazBlue series to us, and once again it is horrendously late. However, better late than never, right? In this case, yes! 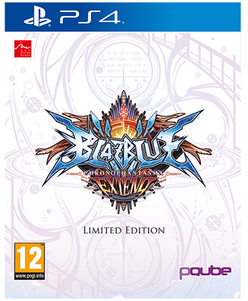 BlazeBlue veterans will already know that the series possesses one of the most layered combat systems around, and Chrono Phantasma does little to change this fact. What we have here is a reiteration rather than a reinvention. Something that any fighting game player is firmly familiar with at this point. Those just jumping in need not be scared though as there are a couple things here to cater to you. The biggest and possibly the most important depending on your fighting game experience would be the “Stylish Type” Fighting mode, which alleviates the need to commit fancy combos to muscle memory by simplifying the combo system. It also has the added benefit of autoblocking providing you aren’t pressing anything. Next, we have the exquisite tutorial system, which baring Guilty Gear Xrd (also an Arc System Works game by the way), is the most in depth and detailed tutorial system I have personally ever seen, putting pretty much all other fighters to shame.

If you are new to the series, you should also be excited by the wealth and scope of the cast. We are all aware of the palette swap rosters of old, that have somehow managed to distinguish themselves overtime as the genre progressed (thinking Mortal Kombat right now, but the series is not alone), but none of that is apparent here. Every character’s unique visual style, is wonderfully complimented by their fighting style and I have to say, it’s quite refreshing.

For those whom balance adjustments do not justify the price of readmission, you will find two new characters, two additional story based modes to complement the branching main story mode, the return of Abyss Mode from Continuum Shift Extend, Unlimited Mars Mode and the usual local and online multiplayer options.

Abyss Mode will satisfy the RPG enthusiast within you, as a survival mode where one can use accrued currency to modify and boost their character of choice to progress. Unlimited Mars Mode puts you against “highly intelligent CPU opponents” and tracks your progress so you can boast and compare with the best or your friends.

However, it is the story modes that are the meat of the single player experience and possibly a point of contention depending on your point of view. Let’s start with the main course (Story Mode), which has become so convoluted the next game mode I will mention has become a necessity. This isn’t a join in at any point and follow along affair, you are going to get lost, accept it. To add to this it’s largely told via character stills. The like you might find in a 10+ JRPG. Even I as a fan of that genre can appreciate that this might not be everyone’s cup of tea.

The second mode labeled “Teach me more, Miss Litchi” as mentioned before is here to help you understand all that transpired in the story up to this point. Problem is, it’s done via sparsely animated chibis with lots of (for want of a better word) jibber jabber in between. Which is great if the dialogue manages to strike your funny bone, but I’m confident even then, you are going to become impatient. It can take a couple hours to get through all of them.

Dessert comes in the form of a library mode that adds context to everything else in the game/community. From bits of lore, to definitions for fighting game jargon you might not be familiar with. All in all, if you aren’t the type to test your metal against human opponents, there is a myriad of content here for you.

Graphically, the move to 1080p seems to have hindered the beauty that is BlazBlue just slightly. It would be crazy to expect a complete recreation of all sprites and animations and thus we do seem to have some pixilation from upscaling, but it’s hard to care when the overall design is so beautiful and running at 60fps. Elsewhere, netcode doesn’t seem to have been upgraded, leaving you with more of the same in that department. Decent.

Like me, BlazBlue: Chrono Phantasma Extend is reminiscent of your good black friend. He’s always late, but when finally arrives, you know you can count on him for a good time. You know this because, despite his age or other minor things, he hasn’t changed all that much. He’s still a lot fun.