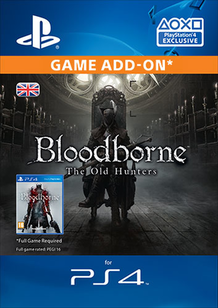 Note: Our original Bloodborne review can be found here.

Oh how I have waited for this day to come. The thrill of reaching for my trick weapon, donning my top hat, and entering the twisted world of Yarnham to continue my hunt. The Old Hunters is an expansion for From Software’s acclaimed, PlayStation 4 exclusive, Bloodborne. Within this blood dripping, gut-wrenching, and soul destroying experience, players will find all the familiar elements that made the game so endearing to begin with. The Old Hunters throws players into the Hunter’s Nightmare; a new zone containing three distinct areas.

The first thing you will notice about this expansion is its clever use of already visited locations. The Hunter’s Nightmare is a twisted, and distorted version of Yarnham, giving you a glimpse of the world at the time that the great hunt began. This is a version of the world, preserved in time. A place where hunters go and lose themselves in a version of the hunt that is eternal, drawn here by their lust for blood. The environments, whilst being familiar, present themselves in original ways here. They play with your perspective in a way which I found rather unsettling, in the best possible way. I have always considered Bloodborne to be the greatest tribute to the work of H.P. Lovecraft, and this new variant of Yarnham continues that legacy. The newer areas carry the Lovecraft torch well, offering new sights that would leave any sane mind altered. This expansion looks and feels exactly the same as the rest of Bloodborne and that’s what I wanted.

As I mentioned earlier, the key narrative thread to the expansion is reliving a time when the hunt first began. The characters you meet and enemies you face all reflect that singular theme. The Old Hunters has allowed From Software a great opportunity to explore this part of the worlds history; introducing many individuals whose names you knew from the main game, but never got to meet. I am a bit of a lore nerd when it comes to From Software games so for me this expansion was a treat in that regard. Meeting some of the legendary hunters who’s equipment helped me complete my own journey, was a great experience. The enemies also reflect the time, being beast focused, with the added element that you get to witness the war between the hunters and the hunted. Everywhere you go in The Hunter’s Nightmare, you find the great hunters of the time going toe to toe with packs of monsters. More often than not, I found myself sitting back and watching the chaos unfold. Other times I would activate my Burial Blade and wade into the fray with reckless abandon. Unfortunately, the crazed hunters are never pleased to see you, meaning you have to dispatch them as well as the beasts.

Whilst we talk about The Old Hunters cast of characters, it would be a sin to not draw attention to the bosses in this expansion. From Software have always been excellent at creating challenging, and memorable boss encounters. The Old Hunters doesn’t disappoint in that regard. The boss fights in this expansion are some of the hardest I think they have ever produced. I still think ornstein and smough is the best boss fight in the franchise’s long and glorious history, but there are some within this expansion that I would consider for a top five list behind the legendary dragon hunters of old. What I appreciated about the bosses here is that their mechanics felt original and fresh. Sure, some of them you will have seen before, but I assure you that if they do show up, they have a twist to them that makes you rethink your strategy.

With plenty of new enemies and bosses to slay, you will be able to collect a whole slew of new and exciting items to help you meet that goal. There are a bunch of new armour sets and items to collect, some of which remain a mystery about what their purpose is. The highlight for me though, has to be the new trick weapons. These unique weapons are one of my favourite things about Bloodborne. They are one of the core aspects of the game that elevates this title about the other Souls games. The new trick weapons are all fun to use and offer players several new combat styles. These weapons alone will breathe yet more life back into the main game as players will be eager to go back through the original with their new toys. I don’t want to mention any specifics here but if you thought picking your favourite weapon was hard before, it’s even tougher now!

The Old Hunters is an excellent addition to an already outstanding game. The content is challenging and definitely aimed at end game and new game+ characters. It is great value for money, weighing in at a chunky 15 hours of game time, for an experienced hunter at least. The new bosses and enemies are great. They are either reworked versions of underused enemies from the main game, or new enemies, with new attacks and weaknesses. The new hunter gear is great, with trick weapons being a highlight, but I did fall in love with some of the new armour styles also. I especially like the insight (yes, I want there!) into the lives of the great hunters of legend. Being able to interact with these characters was a great experience and adds some context to the events of the main game.

I don’t have anything bad to say about The Old Hunters if I’m honest. I love Bloodborne and this is just more of that high quality content I have come to expect from a developer like From Software. The Old Hunters is a masterclass in how to create good value expansion content. My only regret is that now I have completed it, I am unlikely to get anymore content for this incredible game. Let’s just hope that Bloodborne 2 isn’t far away. In the meantime, go and play this expansion, and fear the old blood.

great review. was on the fence, but definitely getting this now. ready to get battered lol.

yep. good review this one. picking this up this weekend. hope they release more content.