Another year and another Call of Duty (aka COD). This time it’s Call of Duty: Ghosts with Infinity Ward stepping up to develop the game albeit with some slight assistance. So is Ghosts the same Call of Duty rehashed again, or does it bring some genuinely new and fresh to the table? Read on to find out. 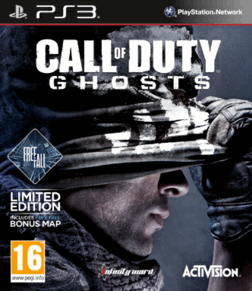 On a personal level, I’ve never been very good at COD multiplayer so I rely on the story to make the game appealing to me. In previous years I have always been impressed with the plot of Call of Duty campaign modes, but Ghosts left me with a feeling of déjà vu. There is very little originality in the story, from ex team members turning rogue, to “surprise” reveals that can be spotted a mile away. Not to say it didn’t keep me entertained at all, but I just felt I had seen it all before, whether that was in another COD or somewhere completely different.  There were also certain moments in the game where you start to think you’re watching a poorly directed film.

Graphically COD doesn’t disappoint nor should we expect anything less. Call of Duty has always shown outstanding visuals across its wide portfolio of spin offs. With the next gen versions of the game on the brink of release as well, this is probably the best looking COD game to be shown on the current generation of consoles. Environments look amazing and when they are destroyed they look even better! Character models are predictably spot on and your own characters transition animations are beautifully done.

Don’t underestimate just how important sound is to game these days. The more cinematic a game is, the more importance is placed on music and the score. There is a recurring score throughout the entire game, which has to be said, sets the tone immensely well. Ghosts sticks to the dark tones that Black Ops II left behind but still feels individual to this edition of COD. Of course along with that, the sound effects are executed to perfection. With the COD games, audio very rarely comes in to the conversation and that is with good reason. It is so good, no one ever even thinks about it. That’s the way good audio should be, in the background away from the spotlight.

Ghosts falls very much line with the gameplay style of previous Call of Duty titles. There really isn’t that much of a difference when you compare it to its older siblings in terms of core gameplay. There is, however, one new addition that may change the way you play slightly. It’s name, or his name in this case, is Riley the dog. In both campaign and multiplayer, Riley is there and presents you with a different option when taking down opponents. Whether it is using a remote device on his back to track down and tear up enemies or using L2 to target them and let him run, it gives you another option, something that will certainly be at the back of your mind when in warzone situations. Shooting is crisp, as long as you stay in control, fire recklessly and you are likely to miss the target altogether.

Brand new to Ghosts is Extinction mode. Gone are zombies and entering the fray are aliens. Dog-like aliens, but aliens none the less! This provides a welcome change of pace from the super realistic approach of campaign and multiplayer. To be fair, this really is Black Ops Zombies mode but replaced by Aliens, using the same gameplay mechanics to buy weapons etc. It’s still lots of fun, but nothing too different from what you might have already seen.

Infinity Ward has tried to make progress in regards to online this year. Maps are bigger, which is mostly great, but this often lead to me roaming around for a while without seeing anyone at all. There are several new modes to multiplayer too, with the most interesting one being Cranked. It’s basically Team Death Match meets Saw. When you kill an enemy a timer comes up which requires you to kill another enemy before the time expires. An interesting concept, and it must be said, a concept that is certainly original. Then you have Blitz, which is eerily similar to Capture the Flag but without the flag! You kill enemies on your way to penetrate the opposing teams glowing circle while all the while trying to defend your own.

Aspects that will please gamers are in game challenges. When you kill opponents you can grab a floppy disc pick up which gives you optional objectives with in the game. For example, it will ask you to kill your next 5 kills from behind, or with a knife, or from distance etc. It definitely brings a different dimension to multiplayer, giving the gamer an alternative objective other than one that is determined by the main mode.

Never a problem for the Call of Duty franchise, be it in the past or the future. The campaign isn’t the longest in the world, but the sheer hours you can get out of multiplayer and Extinction are just plain scary. If you are a COD fan, you will be playing this game all the way up to the release of the next one.

While the story was predictable and stale, there are still moments where the game makes you feel engrossed and intrigued. Multiplayer has facets that make it feel fresh and Extinction is a lot fun. Suffice to say Call of Duty: Ghosts is another great if somewhat familiar addition to the mammoth series. It should please the many existing Call of Duty fans and may even bring in some new ones.