A game of two halves…

Mid-November means that it’s Call of Duty time, and with Treyarch at the helm, it’s time to bring out the Black Ops side of the franchise. With the series taking some broad strides with last year’s Advanced Warfare, how does Black Ops III stack up? Pretty well, apart from the campaign. 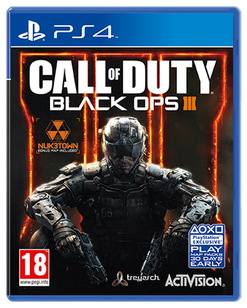 Call of Duty: Black Ops burst onto the scene in the midst of the Modern Warfare revolution of the FPS juggernaut. Black Ops II took the story of Mason and “The Numbers” into the near future. Black Ops III, however, abandons any threads that were left dangling and picks up an entirely new cast of characters. It also picks up a storytelling mechanic that is almost entirely new to the Call of Duty series, with the option of a non-linear mission structure. Want to play the last mission immediately after the first to see how it ends? You can do. It’ll make absolutely no sense at all, but you can do. I’ve got to be honest though, even if you play through the campaign in the typical way, it still might not make a whole lot of sense. It’s a jumbled mess of some pretty good ideas, and it makes for a frustrating experience.

The story is utter nonsense, and could have done so much more with an interesting core idea of the DNI, or Direct Neural Interface. Essentially a ‘real life Matrix overlay’, it provides some really cool gameplay moments, including a Tactical View mode that highlights enemies that your AI teammates can see. It’s essentially Batman’s “Detective Mode” but with added death. Black Ops II introduced drones into the franchise, and Black Ops III takes it one step further, bringing full on autonomous robots into the fold. Sadly, they don’t quite have the desired impact. The point they’re introduced to the story is supposed to be some sort of big Terminator-style reveal. Unfortunately, due to the way that the Call of Duty stories still keep playing out, I was running around like a bit of a loon and it didn’t have anywhere near the effect it was meant to. It was a constant niggle, with the supposedly heavy story beats being outweighed by my incessant, puerile sprinting and crouching at the most inappropriate moments. It’s a problem that’s plagued CoD games for quite a while now, but it’s only really gotten to the point that it’s hampered my enjoyment this year.

That said, when the campaign hits its highs, it feels great. There were some moments towards the end where that classic “Call of Duty feel” was in full flow, legging it to escape a collapsing building, whilst picking off the odd enemy that stands in your way. It just didn’t have any of those ‘classic’ moments such as “Crew Expendable”, “All Ghillied Up” or “the nuke bit” from the original Modern Warfare, or (spoilers) the bit where Shepherd went rogue in Modern Warfare 2. In fact, most of the campaigns haven’t had anything like that for a few years now, and it’s something that needs rectifying.

But enough about the campaign, we all know everyone comes to CoD for the multiplayer, and Black Ops for the Zombies. Right? Well, Treyarch have outdone themselves. This year’s multiplayer offering is the best in years. Building on the changes Sledgehammer made to the movement in Advanced Warfare, Treyarch have kept the Exo Suit style double jump and added in some other perks to not only bring Black Ops III in line with last year’s title, but surpassing it. The gunplay feels as tight as it ever has, and from the games I’ve played so far, there isn’t a whole heap of issues relating to host advantage/lag as I’ve seen in previous games. If you’re confident that the bullet in your brain was put there by someone with significant host advantage, you can check your ping in real time by pausing the game to check. It’s a handy tool that will no doubt settle some arguments between friends online!

The maps are nicely designed as well, with a lot of areas designed for close quarters combat as well as the distance-focused battlegrounds. However, you’ll still encounter the kinds of people who think sniper rifles are best used as pistols, and vice versa. Of course, the progression system and the way the unlocks are allocated has its own issues, in that it’ll always be weighted in favour of the golks who play it more often, but it’s a fundamental part of the experience that ultimately keeps you on the hook.

As mentioned above, Zombies is back this year in its typical format. None of the Exo Suited undead for you to plough through this year, just the standard, shambling hordes that you know and love. Set in a 1940s themed map, the atmosphere oozes from the mode, and it’s easily the most polished zombies experience in a Call of Duty to date. I’ll be honest, it’s not really my thing, but for those that like it, it’s in here and it’s extremely well done. Speaking of Zombies, there’s a rather interesting little easter egg for the campaign that unlocks after you’ve completed it, which mixes it up in some nice ways, but I won’t spoil too much about that!

Black Ops III really is a mixed bag. On one hand you have possibly the best multiplayer experience since Call of Duty 4, with a strong set of maps and a hugely immersive Zombies campaign to go with it. It’s just a shame that it’s been let down by a campaign that has some great ideas, but doesn’t know where to run with them. I’m sad to say that I think the days of the good Call of Duty campaign are behind us, with last year’s decent outing being the exception. Still, there’s a lot of content here. In terms of a multiplayer shooter, Black Ops III is easily the best that Activision has published in a long time. After being roped back on board the Call of Duty train last year, I think I might as well buy an Oyster Card at this point, because it has its hooks in me once again. Now if you’ll excuse me, I’m off to play Call of Duty 4’s campaign again.