Dracula is a character that can be used infinitely. This time he is back again as Gabriel Belmont in Castlevania: Lords of Shadow 2, a sequel to original that was released in 2010. Will Lords of Shadow 2 build on the good work of its predecessor or is it another unnecessary sequel? Read on to find out. 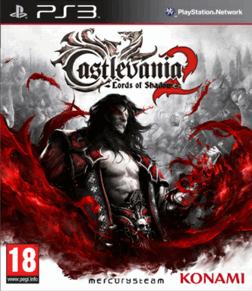 Dracula is awoken years after the previous game concluded. Zobek has come to him to tell him of the return of Satan. However Dracula is weak and does no possess the skills that he previously did in his prime. His castle though is the centrepiece of his return to greatness. Along side Satan, the Belmont clan and his son Alucard also look to take down Dracula. There are times that the game does drag, but on the whole it is still a good story that finishes off a somewhat complicated tale that was originally started four years ago.

Lords of Shadow 2 plays how you would expect it to really. Like similar games in the third-person hack and slash genre, you attack using square and triangle, square being a fast attack, aiming at one opponent and triangle being an area attack, trying to hit several at once. To add to that, you can press X to jump and circle to grab or finish off enemies by sucking their blood and tearing their necks!

The core gameplay mechanics are very good. The game flows very nicely and animations are extremely smooth. It’s actually something I would single out for particular praise. I have played other similar games where I have felt that the transition animations in real time gameplay were poor and didn’t match up correctly. I had no such concerns here, everything felt smooth, even the transition from gameplay to cutscenes and vice versa.

If you’ve played the original or similar third-person hack and slash games, you’ll be right at home here. There are some nice little “distractions” in terms of the combat, but for the most part the action is the typical genre pattern. Not that there’s anything particularly wrong with that, it’s just the further you get in the game the more you get the “been there, done that” feeling. Good, not great, that’s probably the best way to sum it all up.

Boss battles aren’t the most imaginative either, most of them were quick and relatively simple. Not that I want the battles to be overly complicated, but a bit more complexity and imagination wouldn’t have gone amiss.

As far as the now last generation graphics go, this is not a bad looking game by any stretch of the imagination. The only problem is that it doesn’t match up to the games at the top of the ladder such as GTA V and The Last of Us etc. However, like I said, it is not a bad looking game. Both modern and older day environments are beautifully created, and while the game itself is rather dark, the lighting is very impressive, bouncing nicely off the impressive character models.

Oscar Araujo’s score to the first game came in for spectacular praise, and he is the master behind another spectacular sound track. He spent time in London’s Abbey Road Studios and had a 120-piece Bratislava Symphony Orchestra and full choir at his disposal to create a score worthy of Dracula’s tales. The voice acting is also fantastic from Dracula him self to the Satan’s minions who try to destroy you along the way.

With the game being purely story, once you’ve finished it, there really isn’t much to do. Having said that the story is considerably longer than its predecessor. It will definitely take you a while to finish the story, and not just because it’s longer. There were many times where I just couldn’t figure out what to do next or where to go. Perhaps that is down to my ability to play the game effectively or maybe it’s down to the game not giving enough help, either way it helped stretch the game out!

Castlevania: Lords of Shadow 2 is a good game, which isn’t a bad thing. However, it never really elevates itself to another level, which is a slight shame as the potential is there. Elements of the gameplay are crying out to be pushed that little bit further, but that never really comes to pass. That is Lords of Shadow 2 in a nutshell. If you played and enjoyed its predecessor, then this sequel is worth a purchase. For newcomers to the series, even though some plot points will go over your head, it’s decent one time playthrough, but just don’t expect to be amazed.