Delve into the darkness with Aurora and her friends in Child of Light. Ubisoft’s latest title is a delightful-looking RPG, released across a huge number of platforms. Is it worth picking up? 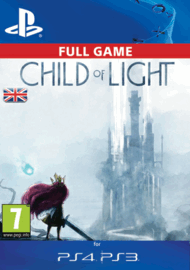 Child of Light’s story focuses on Aurora, a princess from Austria, who is battling to save the mysterious world of Lumeria, and restore light to it by finding the sun, the moon and the stars. Only when this has been complete, will Aurora be reunited with her father. The story is told through small cut scenes, alongside interactions with NPCs and other party members. If there’s one thing to complain about, it would have to be the rhyming nature of the writing. Whilst initially charming, it quickly feels very forced, and at its worst, feels downright pretentious. It is a shame, because it would otherwise be incredibly engaging.

Let’s get this out of the way. Child of Light is gorgeous. The UbiArt framework allows developers to essentially hand draw everything then import it into the game, and it’s used to tremendous effect here. Every area looks like a wonderfully crafted piece of concept art, with Aurora’s hair trailing behind her, and backdrops that just beg to be explored. Sometimes they can feel a little sparse, but there are always very well designed enemies to grind out the combat side, or hidden chests and items around every corner. The game runs at a solid 60fps, with 1080p visuals on PS4 and 720p on PS3.

Equally engrossing is the sound within the game. The gentle background music and the soothing sound effects help to craft the world of Lemuria alongside the artwork really well. Atmospheres are changed in an instant, going from dark to light brings a sense of relief, and battles feel suitably frantic thanks to the soundtrack in the game.

At its core, Child of Light is a side-scrolling RPG. It starts off feeling like a platformer, but any semblance of that goes out of the window early on when you get the ability to fly. There are a few puzzles scattered across the game as well, which is certainly a welcome addition. The puzzles feel satisfying once you get past them, and rarely feel like they’re frustrating you for the hell of it.

Combat in the game is typically turn-based, but with an interesting twist. Both you and your enemies have a “wait” and a “cast” time. If either side gets struck during the “cast” time, that character gets put back into the “wait” period and they essentially miss a turn. It’s a great mechanic that works both ways, and can easily screw up any well thought out battle plans if you mistime something!

Child of Light also brings co-op to the table, in the form of your firefly buddy, Igniculus. He can be controlled either with the right stick of your pad, or by a second human player entirely. It’s a nice way of introducing co-op into a title like this, as Igniculus has a few useful tricks up his sleeve. One of these is to “blind” certain enemies by making him glow using the L2 button, which allows Aurora to slip by them and avoid any unnecessary fights. Another is to slow down enemies and also heal party members during combat, which certainly helps at times. Igniculus’ abilities are powered by blue orbs, which you can pick up during the game, and also by 2 “bushes” in fights, which will replenish themselves over time. It’s certainly useful, and never feels like it’s overpowering. It is immensely satisfying to slow an enemy down to interrupt their attack, then heal any party members straight afterward, and if it’s timed right, you can win entire battles without facing much in the way of opposition attacks.

There’s a surprisingly deep crafting and upgrade system in the game, which allows you to add elemental attacks to your physical strikes, as well as upgrading armour and general abilities. The skill tree is huge for a game of this scope, and will certainly benefit those who want to grind to boost their levels, but the game progresses at such a pace that this isn’t a necessity for most.

The main story in Child of Light is more than lengthy enough to justify its price tag. With a New Game Plus mode after completion, and whilst you’re not going to get the hundreds of hours offered by some more “traditional” RPGs, this is not a small game by any stretch of the imagination.

Child of Light is a game that’s worth of a spot in anyone’s collection. With the PlayStation versions being cross-buy, it’s difficult not to recommend it. In the video review, I mention that it’s £16, and this was an early price for the deluxe edition online. If you download it from the store, it’s £12, and that’s a fantastic price for what is a beautiful game. If you’re willing to forgive the slightly irritating rhyming structure to the narrative and just get on with exploring the gorgeous environments, you won’t go far wrong with Child of Light.