If you’re around your mid 20s like me, I’m sure you all remember the good old days when you would queue up on holiday to have a go at the original Dance Central machine and give it your best shot amongst a lot of somewhat weird glances coming your way as you realise you’re not actually dancing … Now, fast forward a few years and Harmonix have released the third iteration of their Dance Central franchise, where this time it requires the use of the Xbox 360’s Kinect sensor. In my mid 20s, can I still have the same amount of fun that I had years ago on that famous dance machine? Or have dancing games finally gone out of fashion? Read the review to find out! 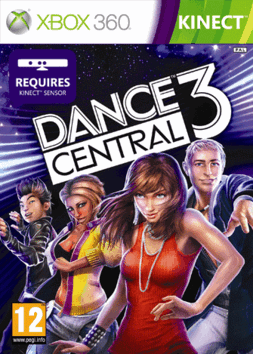 You may think that dancing games can’t have a story, and that the only thing to do is to pick a song and follow some on-screen guide as you sweat and shake your way through the song. Done … Thankfully, this is not the case in Dance Central 3 and personally I think Harmonix have done a good job in keeping the game fresh as you go through the game’s story mode and keeps you wanting to dance along with the songs.

The story sees you take on the role of a secret agent for Dance Central Intelligence (yup, the dance version of the FBI). Becoming a secret agent however isn’t really as easy as you think as you have to take on two of the song’s hardest routines in order to prove to the other agents that you are good enough for the job. From there, you have to travel through time, stopping at different points, and dance your way through to the next stage. Dancing to YMCA by the Village People will never get old and it’s great to see classics like that get just as much attention in the game as the current R&B songs the kids these days seem to love.

There isn’t much need for fancy graphics in a dancing game as the main points are certainly the song and your actions, but Dance Central 3 certainly gives the game a polished and colorful theme making it quite nice to see yourself on screen busting a move and having it represented very nicely. As you go through the Story mode, you’ll see classic clothing such as the cast of Saturday Night Fever which adds a nice touch to the visuals and authenticity of the game.

This is probably the best year track wise that Dance Central has had on offer. As mentioned before, it’s a very nice touch from Harmonix to give just as much attention to the classic, old tracks without bringing some current tracks in because overall, the track list is very impressive.

With tracks ranging from Y-M-C-A by the Village People to Moves Like Jagger by Maroon 5 to the fast, popular LMFAO – Sexy and I Know It, there is certainly something for all ages. So yes, don’t be surprised to see your granny and your girlfriend/boyfriend both on Dance Central 3 at the same time. If you want to know the full track list before you buy this title. you can click here.

Kinect has had its critics and I’m probably one of the worst ones out there but only because it’s obvious to see how much potential the device has. Dance Central 3 and dancing games as a whole, I must say are perfect for the Kinect sensor as a whole. Each move you make is represented virtually instantly on screen without any lag at all and it’s very, if not frustratingly accurate.

You would think that Kinect expects to see Louie Spence on the screen at all times because, put one arm or leg out of place during that dance move, Kinect and the on-screen visuals will certainly let you know by having the joint that is wrongly placed shown in red which shows you need to do something differently. I personally couldn’t see myself enjoying this so much and it really is such a buzz inside when you get that full routine down to the right last beat, and definitely gets you feeling very competitive with yourself to try and beat your last score.

You don’t have to perform a song right from the very go, as players can rehearse the song as many times as they want in order to find dance perfection. This mode will certainly be used a lot during Story Mode as each era becomes harder and harder. There are tutorials available where players can learn each of the dance move and players can also slow down each dance move in order to practice it more precisely and become the king of the dance floors. Each track has its authentic dance routine and it’s great you can brag to your mates that you know the dance moves to Ice Ice Baby or can shake your ass to the wonderful Starships by Nicki Minaj.

Overall, it’s really good to see the Kinect sensor utilizing its full potential and have you really believe that you’re learning something here, not actually tripping your toes because of an inaccurate body-tracking exeperience. The game can also be used as slimming down exercise as there is a fitness section that helps track how many calories you are burning whilst dancing away. Personally, I can see this game really helping people (myself included) lose weight as you seem to sweat near enough after 5 minutes which, whilst good, it’s advisable to take regular breaks due to the dance routines the game puts you through.

Although its prime function is to get players to dance, there are many features here to keep you coming back to it. Whether it’s getting fit, getting into a competitive spirit with mates through a dance off battle or creating your dance moves, there is plenty to do throughout the game to keep you coming back for more. The one down point of the game is there isn’t an online multiplayer format. It would be great fun to dance off with other people around the world and maybe Harmonix can incorporate this feature in future versions of Dance Central.

From initially dreading standing up in my room and dancing, I am now proud to say Dance Central 3 has certainly brought the fun side out of me. With 45 tracks on offer, a great story and the potential of myself getting fitter along the way, I’m certainly glad I took the plunge into Dance Central 3. Okay, I may not have the dance moves of the great Michael Jackson, but this great dancing title takes me back to my childhood. With Kinect utilized in a fantastic way, Dance Central 3 is great. Excuse me if you will, I’m off to shake my booty!