Disclaimer – this review for Dark Souls 3 is “in progress”. As of yet we have been unable to look at the multiplayer features of the game and we won’t be committing to a review score until we do. There are talks of a day one patch to address some performance issues around the time that the game launches, so I’ll be updating this review then with multiplayer impressions as well as any tweaks that patch applies, and my final score.


After hours of battling through a dilapidated castle, dying several times but managing to learn the lay of the land enough to progress I finally make it to a large open room with a double door at one end – freedom, surely… but then there’s a growl from behind and a giant beast lumbers into view. Of course it kills me. But, with the knowledge I now have I return, slightly more tooled up, and lay waste to the hideous creature, throw open the doors and… ahh, I love Dark Souls 3. Then a few hours later, after a particularly gruelling trudge through an even more dilapidated village I meet the next boss and get murdered. Repeatedly. With no remorse. I hate Dark Souls 3 and I want to burn my controller… 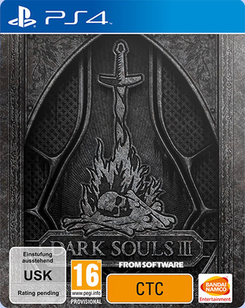 I’d like to think that sentiment is felt by Dark Souls players worldwide. That sense of elation followed by crushing frustration. I mean, after all, that’s what the draw to this series is, right? That it’s brutally hard? Through the preceding four games, Dark Souls 1&2 and PlayStation exclusive entries Demon’s Souls and Bloodborne (even though it’s more of a spin off, I feel that it contains enough of the core series tissue to be included), that sense of crushing failure has almost been the series’ raison d’etre. It’s a strange then that, despite its brutality, Dark Souls 3 almost feels like the most accessible of the series so far, taking a somewhat “greatest hits” approach to its structure.

There are little bits of the earlier games peppered throughout the experience, from the Nexus like hub world of Firelink Shrine to the immediate fast travel, Bloodborne-esque undead villagers (seriously, I took to calling the game’s second main area “Lil’ Yharnam”) and a more discreet structure to the world’s interconnectivity, there were a lot of moments through my many hours of playtime that I felt “Oh yeah, that’s from THAT bit of THAT game.” When you start to recognise reused assets, animations and sound effects from those earlier games,  little bits of repetition start to set in. But that’s not to say that the game doesn’t have its own unique elements.

The story, for one, is fairly compelling – head out into the world and find the lost Lords of Cinder, returning them to their thrones and stop the end of all things as we know it (surely a doddle, you say…). While the lore of the three Dark Souls games is indeed linked, with recurring themes and characters, newcomers needn’t worry about missing out, as you can enjoy the story as standalone requiring no real knowledge of prior events. A couple of nicely rendered cinematics set things up at the get go and you’ll meet many NPC’s in your first few hours of play that will bring you up to speed on the rest.

Dark Souls 3 also excels at building a compelling world to adventure round. While purists will likely find disappointment that the areas are somewhat more fragmented than the glorious, sprawling Metroidvania like structure of the previous entries, it’s more than made up for with the world’s sense of scale. The revamped engine makes use of the next gen machine’s hardware to push an incredible draw distance allowing for some breathtaking moments. Push open the door after the first areas boss, for example, to be treated to a pulled back view over the next place you’ll visit, spilling out below you across the landscape. It’s stunning stuff and even better when you’re in the thick of things. Trudging round these hostile environments leads to an acute sense of wonder and discovery. The way that digging into certain corners will yield hidden goodies or NPC’s that you can talk to opening up new quest opportunities with long lasting impacts and benefits. The way that pathways and corridors loop and intertwine, linking the world back in on itself, helping you find shortcuts to areas so that you can avoid more hostile areas and approach boss rooms with a greater amount of health makes things feel organic.

It’s those shortcuts that are critical in a game series that forces you to repeat yourself over and over again in some kind of sadistic groundhog day. Every time you die or rest at a bonfire (the Souls games restart points, where you can manage your inventory and fast travel to other areas or back to the Shrine) the enemies of the world reset but the world itself does not. This means that you can explore an area in a “suicide run” with a focus on finding hidden items and opening up shortcuts, testing the waters before you make a proper run on a major objective with the least resistance. Learning the placement of enemies here almost feels like an old school bullet hell shooter where the player will, through trial and error, lose time and again but will hopefully remember both where enemies will come from and what tactic to best employ against them.

There are tactics aplenty. From the get go you’re presented with a wide array of default character classes from the tanky Knights and Warriors, the nimble but lightly armoured Mercenaries and the magic wielding Sorcerers and Pyromancers among others; there are a number of ways to approach the early stages of the game even if you end up focussing your souls (the series’ currency) a few hours down the line. Indeed, one of my favourite things to do when stuck in a rut with my main character (a Mercenary) is to roll a new build and see how far I can take them before dipping back into the main run. It’s a game which frequently rewards replay and experimentation.

One of these areas of experimentation is in the new Focus Point (FP) system and how it affects the series’ staple health regeneration method, Estus. FP is exhausted when you perform certain actions such as a special weapon ability (only available by equipping specific types of shield) or casting a spell or miracle. Run out of FP? No chance of blasting that boss with another fireball. Sorry! The only way to recover FP is to drink from the Ashen Estus flask that you find near the beginning of the game. The catch? It initially only holds one dose of Estus and the amount of Estus it CAN hold comes from your entire stash. So, at the start of the game, you only have five Estus available to distribute over HP and FP restoration. You can change this at the Blacksmith in Firelink Shrine so you could have, for example, three charges in your main HP flask and two in your Ashen FP flask, but it makes early runs as a magic user far more daunting when you know you have less opportunity to heal. The amount of Estus you can wield and its potency is upgradable with items you find in the game world, but these are rare and often well hidden making them all the more rewarding when you do come across them.

Did I mention Dark Souls 3 is hard? Dark Souls 3 is hard. It’s unforgiving. If you try and play this game just like any old JRPG you will meet an early and embarrassing death. But, converse to this are the uneven difficulty spikes. The games early stages, the tutorial if you would, are fairly easy to stroll through and even the first boss is relatively straightforward to dispatch. The game teaches you well that it’s not going to make things easy on you. Best git gud. The first area after that gets progressively tougher, throwing new, more heavily armoured enemies into the mix, but things go downhill pretty rapidly after that making it easy to get incredibly overwhelmed. Downhill is a good analogy. The way the world is structured pushes you constantly downwards, from the top of a high walled fortress, through a hillside village and onwards, the increasing difficulty making it feel like a definite descent into hell. The rapid increases in difficulty are helped, though, with a thoroughly polished control and combat system. While the game still plays a lot slower than it’s more action focussed cousin, Bloodborne, movement is more fluid than it’s ever been and enemies are easier to read (once you’ve been murdered by them a few times and learned their attacks) making progress feel possible in the face of crushing adversity.

What is disappointing, at least at the time of this review, is some performance issues that are noticeable in the game. Texture popup can be a big problem after loading a save game and, while it’s not an ongoing issue it briefly takes you out of the world as you step back into it. A couple of days after I started my review playthrough, a version 1.01 patch also dropped which added in the as yet inaccessible online features but also seemingly introduced some very harsh slowdown when entering larger areas. This is yet to affect combat to any noticeable degree but briefly feeling like your character is running through treacle is again a disappointing distraction from what is a visually stunning game.