Capcom Vancouver has continued Dead Rising’s tradition of taking the zombie genre and dialing it up to eleven. But with more power to play with, thanks to a new console and the fair amount of expectancy that inevitably comes with launch titles, does Dead Rising 3 impress or regress? Read on to find out. 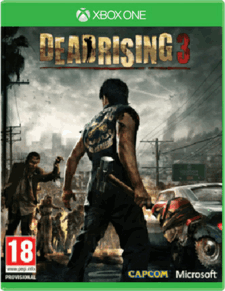 Whilst the first two games placed you in the confined quarters of a Mall and Casino, Dead Rising 3 spans the fictional city, Los Perdidos. Ten years after the events of the last game, you’ll take the role of Nick Ramos who has an uncanny knack for building things and working with machinery – a good trait for a zombie apocalypse as it happens. Roaming through the dilapidated open world of shops, streets and dwellings you’ll learn that things have moved on a little since the last outing. Zombrex is a new drug to prevent bitten victims from changing, plus the government has installed chips into civilians in an attempt to garner some control. It hasn’t all gone to plan though, and you’re left trying to escape the city before they start reigning down nukes to wipe the infestation out.

Narrative has never been a feature of the series, and why should it be. It’s always been an awkward mish-mash of seriousness, flittering in between periods of pummeling the dead locals wearing nothing but a tutu and a Chinese festival dragon head. That remains true this time round, although whilst the story still isn’t particularly memorable it does do enough to make you want to save the people around you, and that hasn’t always been the case. Nick himself is likeable, despite coming across as a humourless, less nimble version of Nathan Drake. He’s then surrounded by an hysterical B-movie cast that seems to like making all the wrong decisions in wake of your own sensibility. It’s a shame there’s not as much humour in the cutscenes as you’ll find in the gameplay, but overall the plot serves its purpose despite the little ambition it carries.

Visually, you might be expecting a little more than Dead Rising 3 has to offer, although the step up is transparent in places. For example, the number of on-screen zombies is immediately apparent with streets littered with them from back to front. Then there’s the city itself, that whilst finer details might be absent, is still a nice improvement over the claustrophobic level design of the other two games.

Questions might be asked when it comes the the game’s technical assets, though. Running at the now hugely frowned upon 720p/30fps (the spec that shall not be named), there’s a good portion of the game that feels distinctly ‘last-gen’. Examples include weak texturing and the odd inconsistent frame rate when things get hectic, sometimes even to the point of negating the gameplay which can be slight nuisance when you’re the main course in an undead dinner date. There’s definitely a nice open feel to the game though, and the way in which the regular game mode asks you to play only solidifies that feeling more.

Dead Rising 3 is very much the laid-back third sibling; probably a little spoilt and is used to getting its own way. There’s no rush anymore as the obligatory timer has all but taken a back seat. Gone is the repeated rushing back and forth to jab your daughter with medication before she kicks it. In fact, the majority of haste you’ll be applying is in side quests, which act as a little throwback reminder to how things once were in Dead Rising games. The story itself is particularly laid back, only rarely throwing you a gentle nudge in the way of ‘hey, there’s a nuke coming, probably should get a move on.’ It should be mentioned alternative modes restore the timer and veterans will be pleased the option is still there. Personally, the opportunity to explore the game at the first play through and not feel rushed felt pretty good – but that’s just me.

The city of Los Perdidos splits itself into four areas, connected by freeways. It’s not a massive area but it’s big enough to make you thankful for the vehicles dotted around. All of these can be customisable and combined in the same way weapons could in Dead Rising 2, but now you can do it anywhere. Blueprints hidden around the city allow Nick to use his know-how to make some pretty wild concoctions – a games console and battleaxe? Motorcycle engine and a pair of boxing gloves? A teddy robot combined with an LMG? Beating up the undead with these combinations is where the game finds its fun factor the most. It’s safe to say, in the awards category for best ‘Parasol duct taped to a dragon head’, Dead Rising 3 wins.

The crux of gameplay is a little more straight-up. You’re a survivor trying to escape the city. Along the way you’ll help others fend off the undead, who’ll in turn help you out with supplies. Advancing the story is often as simple as venturing out, having a few scuffles, collecting a few supplies, and then heading to the next story mission which is often conveniently placed at the other end of the map. The devs clearly wanted you to explore the open world and indulge in the side missions along the way and it does work quite well for the most part. Mainly because you’ll want to get stuck into a progression system that offers far more freedom than the first two games.

As opposed to having abilities that were tied to levels, Dead Rising 3 allows you to pick your character upgrades as you see fit from skill points earned leveling up. Making weapons last longer, shooting skills, melee skills and health boosts are all here in force and because of the extra freedom, there’s a far greater sense of customisation than before. It’s definitely a plus that you can choose how you want to play the game from the off, especially when variety can feel a little thin on the ground during your time in game.

The biggest, most resounding problem with the game is the overall clanky feel to the controls. It’s often heavy and unwieldy to the point where you’re hitting buttons with no idea which direction your character is going to fling himself next. On top of that, you’ll often struggle to spin the camera in time to compensate for the unpredictability. This is most apparent in boss fights, that despite being considerably easier than the older games, are still just as frustrating. Nick can often feel like he’s wearing a pair of Link’s iron boots in contrast to some of the game’s boss’ agile movement as they knock you around mid-animation like an unmovable force – it doesn’t sit right with the rest of the game and can be jarring visually.

What Dead Rising 3 does offer is a solid ten or so hours of zombie mashing, with some unmatched humour in weapon design and a good reason to go digging around in the darkest parts of the city for collectables and supplies. Replaying on the harder modes remains an excellent challenge whilst the standard modes are so much more accessible, gamers that might have been turned off from the series should certainly give it another try. You’ll also find some online co-op drop in that can be set at the start of the game – players can join your story mode and help mow down zombies freely, and it works well in the sense that two hands is far, far better than one against a crap-ton of the undead.

No doubt, as far as next-gen experiences go there’s definitely better options to be found from a technical perspective. That aside, if you can indulge yourself in the game’s humour and overlook the minor frustration here and there, then the wacky weapon combos, better accessibility and impressive volumes of undead are more than enough to entertain. At the very least, Dead Rising 3 is certainly a great alternative to all the military warfare and fast cars.