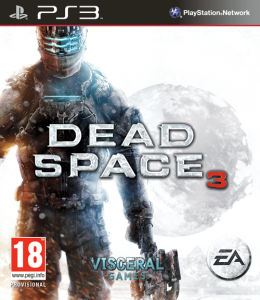 There are sections of the story that I have left out so it doesn’t spoil the experience for gamers that have not yet sat down and played Dead Space 3, but the short gist of the story that is encased in the final title in the series is as follows: Dead Space 3’s story is set on the New Horizons Lunar Colony in the year 2514. With protagonist, Isaac Clarke in hiding for near on three years, following on from the Titan Station infestation in Dead Space 2, you receive information that Isaac’s partner, Ellie is in need of help. Your task is to locate and find Ellie’s last point of contact, but in true Dead Space fashion, the colony is attacked by the Inner Circle of the Church of Unitology. Isaac then gets to work in finding Ellie and eliminating the evil that has landed on the base.

Visceral Games have done a great job at creating a unique look and feel to the Dead Space series before now and just like previously, they don’t disappoint for Dead Space 3 either. The environments are brilliantly detailed and you can see that Visceral have spent a huge amount of time creating this superb looking backdrop. No corners were cut in the overall look and feel in Dead Space 3’s locations. For the most part, the character models look fantastic and the overall visual fidelity is very impressive. But one slight downside is that some of the Necromorphs look like they missed out on the stunning environment’s ‘lick of paint.’ While for the most part they are not no problem to look at, I feel that they could have been freshened up a little since so much has been improved graphically in other areas.

One of the strongest aspects within the Dead Space franchise is the moods that the audio brings to the table and with the third installment, the atmospheric sounds and the audio is fantastically put together to add tension and scary moments when it’s needed. From the screech of the Necromorphs to the grim, yet perfectly exhibited soundtrack, it’s done very well within the context of the game and its setting. At times (but very rarely I may add), I did find that the audio dropped out for some unknown reason but this can surely be eradicated with an update soon. It’s no big issue as it was, like I say, a rare occurrence.

On the gameplay side of things, from afar, Dead Space 3 look identical to its predecessors, but it’s only once you start to delve into the game, you realise that something has changed and unfortunately, it’s not for the better. The game still plays out and controls similarly to how it did in Dead Space 2 and also with the original from 2008, but what the first two games had was a sense of panic, dread and a creepy atmosphere. With the inclusion of cooperative multiplayer (that has been added for the first time in the series for Dead Space 3), this has been tamed and unfortunately, it hinders what made the series so great in the first place. While you can still play the game in single player mode and for the most part it’s fine, the famous Dead Space atmosphere seems lost. One of the best ‘tension inducing’ moments from Dead Space 2 was when hordes of Necromorphs were baring down on you, but you had a very limited amount of ammo to play with. That’s what gave the game its huge abundance of terror and sheer dread of what was happening in front of you. With Dead Space 3, there are times when you are pumped to the hilt with ammo that it actually becomes overbearing and you never really feel threatened by the enemies that are coming at you and I feel as if the co-op side of things may have caused this change of direction.

There are moments when you panic and there are times when you jump out of your skin, but it’s just not frequent enough and this is all down to the addition of cooperative multiplayer. It seems as if the game was made as a co-op title but with a single player element tacked on. I’m not sure why both Visceral Games and EA decided to dumb down the fear factor within the series. Maybe it’s to please all types of gamers by adding a multiplayer element into the mix, but the game suffers because of it and that is undoubtedly a very big issue indeed when you have bought a game expecting more of the same. I was sceptical when I first saw the co-op element at E3 and for the most part, I think both my head and my heart were right in this regard as it really does hamper the experience.

Like I’ve said above, there is still some of the series’ famous atmospheric elements and you will still take every section within the game with caution, but it’s just a shame that the perfect balance that was seen in Dead Space 2 wasn’t replicated and tweaked with to give Dead Space 3 that balance that it needed. It’s far too one-sided towards an action title with its co-op missions rather than sticking to what has made the series famous.

It’s not all doom and gloom though as there are some elements within Dead Space 3 that are welcome additions. The weapon system has been changed and it works fantastically well. By collecting parts while you are progressing, you can then use them to create a various array of different weapons. The amount of choices and options you can customise are huge and the range and possibilities are there in an abundance. Anything from your standard machine gun to a rocket launcher is there for you if needed. The game also sees the addition of buying new weapons for real money, which isn’t a great sign of the way games are being pushed in front of us. Thankfully it’s not needed to get the most out of the experience, but I’m sure many have been caught in the proverbial crosshairs thinking the exact opposite.

The main campaign mode in Dead Space 3 will give you between 15-20 hours of gameplay and with the option of upping the difficulty level and competing in the co-op side of the game, there is more than enough to keep you busy. The biggest problem is that once you have finished the campaign, it’s very unlikely that you will feel the need to jump back in at any point. This is Dead Space 3’s biggest problem as there is nothing that will really grab you and pull you back in. The option is there if you need to, but the vast majority will leave it be.

While Dead Space 3 is a very polished and accustomed title for the series, it unfortunately misses its place as one of the best titles for the current generation of consoles. This is due to the lack of any real improvement to the series from what made its predecessors such accomplished titles. It shows glimpses of greatness, but these glimpses are far too short lived and with the addition of a very weak co-op system that really takes away any stability to the series, it falls short. It seems as though the developers were stuck between a ‘rock and a hard place’ when brain-waving what to do next for the series and this unfortunately shows. It’s by far not the worst title out there, but it could have been one of the greatest at the same time and this is what makes it even harder to fathom.