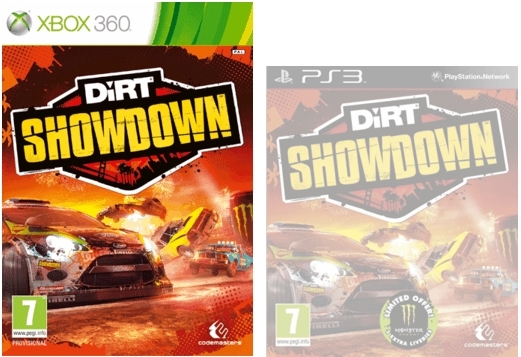 Let’s get his out there first and foremost, DiRT Showdown is good, but doesn’t deserve to be a standalone title priced in the £30 region.

Initially placing it in your console of choice, you are greeted by prompts to get you involved with a number of online aspects. Showdown is trying to tap into the internet and get people talking, playing and noticing it. Unless you go ahead and sign up to all of its prompt straight away, you will be bugged to do so every time you load up, but it’s not a necessity.

Once past the set up and sign up, Showdown looks to be a great game, the sound track is edgy and treats you to the likes of Lower Than Atlantis, We Are The Ocean, and Rise Against. All great selections that play throughout the experience, really adding to the atmosphere and adrenaline that Showdown looks to produce.

Whilst taking this all in, you will be thrown into a tutorial that gives you the gist of how the game is controlled. This is also in place to tease you with everything you are about to experience. A tease it is, but it may also be a lie.

Visually, you can’t really fault Showdown. It’s everything you’d expect from a DiRT title. The menus are solid and easy to navigate, the visuals make you want to be at the event, and the cars look stunning. They have even taken care of the loading screens with a visual of the car you have just selected/raced with, allowing you to take a look at it from all sides. This dilutes into the game play seamlessly. Every detail from water to dirt is taken care of. Equally the damage and race-ware the cars undergo is all handled very well.

So where is the lie? So far it sounds pretty good, and the next few lines continue to make it sound like a worthwhile purchase.

Well getting into a race will appeal greatly to those in the gaming world that love a realistic looking game, but always go out of their way to ascertain first place by a form of cheating that involves cars being rammed off the road. This is in no way cheating for the player of Showdown and it is avidly encouraged!

Realising you have got far to much power for the next corner so using the car ahead of you as a break is brilliant. So many great overtakes can be made that not only look cool, but make you feel like you are the love child of Nigel Mansel and The Hulk.

The “Crash Back” feature is really good for reliving an especially good shunt with a fellow racer. This works just like scoring a goal in Fifa and watching the replay. You can toy with the angles and get a great look at the events before and after you barrelled into the side of your opponent, potentially causing them to lose the race if you are in an event called 8 Ball (a race that has cross over points which usually involve big pile ups).

With the purpose being to smash into others where could it go wrong?

The premise of a great game is there, but sadly Showdown falls short. Within the first few hours of game play, you will have experienced most of the different game types. Each of these game types becomes very repetitive and many of them seem to bail out of the heart of a game designed to smash other racers up. It is but a lie.

Two of the main events are Rampage and Knockout. Rampage is an arena that you and 7 other cars are placed in. the aim is to wipe out the other cars. The problem is that once you destroy a car, they just re-spawn and enter the fray again. This means that the winner of the event is whoever has the most points after the time is up, rather than the last car standing.

Knockout is similar to Rampage but instead oof being in an arena, all racers launch on to a centralised platform. If you knock a racer off the platform you gain a hefty 1000 points (compared to a shunt which will give you between 100-300 odd points and a “terminal smash” that will yield 500 points). Sadly, as within a Rampage event, once knocked off, the racer can just drive up a ramp and come back in.

Half the fun of a game like this is knowing that you have managed to out last other racers. The pride you can feel after limping your car to victory is like no other. With the points system and respawns, it takes that glory away from you. Especially when you may be winning only to lose out to some annoying lurker who uses the last 2 minutes, which offer double points, to sneak ahead of you. Yes you can obviously do this to other people, picking off the low health cars and any who stray close to the edge if you are in a Knockout round, but it doesn’t feel any less cheap.

It also feels like a contradiction to the effort Codemasters have put into creating a realistic feel to the handling. What is the point of having a car so damaged that you have to constantly steer left in order to keep it in a straight line, after your steering column has been ruined? You might as well take a terminal hit and respawn.

This may sound like a miner point to nit pick at, but it is so frustrating that the instructions for a new event are only given to you after the event has begun. Pressing X at the start usually gives you the instructions and pauses the game, fair enough, but that luxury is not given to you in multi player mode. They could easily side step this by putting instructions up during load screens or other points where nothing important is happening.

This feel of Showdown selling itself short could look to the Multiplayer for the blame. Every event feels like it is rushed in an attempt to keep you interested. You are literally in and out every 10-15 minuets.

Unless you are a die hard and determined fan it is unlikely that you will get huge amounts of enjoyment out of the multiplayer. As with most online games, you start off weak and have to play in order to level up. You have to earn the right to compete with the big dogs. Dirt Showdown just seems like the underdogs barely stand a chance, unless (as mentioned earlier) they use the points system to their advantage. All in all, being online made it feel like a chore that only a fairy god mother could spirit you away from.

A counter to this is the split screen multiplayer. Some of the most fun you can have is while playing with a friend on the same console. The amount of “ooooh’s”, “aaaaah’s”, profanities and laughter at both near misses and monstrous slams is surprisingly high! It’s just a shame that it only supports two players in split screen mode.

DiRT Showdown feels like it could easily be DLC for DiRT 3. If Codemasters had thought about it in this way, Showdown could have been a fantastic addition to Dirt 3. It’s almost heart breaking that this title feels like a pilot for a new TV show. You can see the promise straight away and it hooks you in, but by the time you are half way through the series you get bored of the same jokes and average acting. Showdown will definitely hook you in, thanks to its awesome visuals, easy to pick up controls and brilliant atmosphere, but these elements are dampened by repetitive races. If you pick up, you may just find yourself putting it back down a few hours or days after.

You know you're a gamer when you live for the smell of a feshly opened game, mmmmmmm yes! I fell in love with games the day I was given a NES which came with Teenage Mutant Nunja Turtles and Mario Bros. Since then my tastes have developed and I'll happily play most genres, but I can tell you that scary games are a no go! I also try to avoid realistic racing titles. It's Mario Kart for the win!