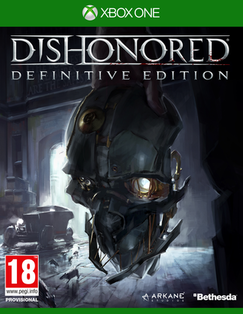 You can read our original review here. This review is solely based on the Definitive Edition and the quality of the remaster.

The gaming landscape has certainly changed since Dishonored was released in 2012, but the advent of the current generation of home consoles has done nothing to diminish its strengths. Dishonored remains an enthralling mix of first-person stealth action, supernatural special powers and a timeless painterly aesthetic. Thrust into the centre of a diabolical plot, out for revenge, Dishonored gives players the freedom to play the game their way – whether that be good or bad, lethal or non-lethal – and to see the game world shaped by your actions.

You take on the role of Royal Protector Corvo Attano – who has been framed for the assassination of the beloved Empress of Dunwall, along with the disappearance of her daughter Emily. After joining up with a group of resistance fighters, Corvo takes revenge against the corrupt leaders who masterminded the killing. Not only do you have to take down these political figureheads, but also the deadly assassins in their employ. Trying to survive on the steam-punk, plague-ridden streets is made a little easier by a series of supernatural powers awarded to you by the mysterious Outsider, who hand-picks you to either save the city, or doom it.

With a little under three years having passed since its release, the title makes the predictable jump onto Xbox One and PlayStation 4. There is of course less competition for Dishonored on these newer consoles – with the re-release opening it up to a potentially new market who missed out first time around – but just how much did Dishonored have to be upgraded and tinkered with for it to classify as a Definitive Edition? Very little it seems – aside from some slight graphical upgrades and handily putting all the downloadable content packs from its previous-generation counterpart (and retailer-specific bonuses) in one place.

There is sadly nothing much that actually stands out and makes this feel like the ultimate version of an already-great title. The previously-mentioned art style is such that a shift up to higher-quality textures and improved resolution has very little effect on the end visuals. Things look sharper for sure – with more vibrant colours (as vibrant as you get in Victorian style slums) but these results were already possible on a top end PC two years ago. On top of that, the action is locked to thirty frames per second even in this new console version, whereas PC gamers can enjoy Dishonored in what is really the best-performing rendition.

Little issues that existed in the original release such as poorly timed lip synching and textures slowly popping in upon loading haven’t been addressed for this new version either, which is somewhat disappointing. The loading times between locations or when restoring a save game are also ridiculously long – a painful step back from that of the peculiar generation. The problem with Dishonored – Definitive Edition is that after we have been treated to other, more in-depth remastered video games, that a quick a dirty re-release like this one just doesn’t satisfy in the same way.

An unfortunate consequence of having this complete package is the inclusion of every single retailer pre-order bonus. By having them all bundled in, players will find their hideout jammed full of upgrades, money and other rewards as soon as the prologue is completed. Although none of the Bone Charm upgrades are game-breaking, having this large amount of cash to spend, and a variety of buffs to apply at such an early stage in proceedings feels like a poor design choice.

That isn’t a reflection on the game itself, which is still just as much fun as it has always been. Using your blink teleport ability to flit from one enemy to the next, silently taking down a whole room of guards, remains incredibly satisfying – as is the feeling that every death by your hand could have some consequence further down the line. The package also boasts the complete Dunwall narrative, by having all of its downloadable expansions at your fingertips. These additional missions aren’t just filler – they are well-crafted chapters in their own right, which enrich and expand upon the canon of the main story, whilst delivering new set-pieces to test your skills.

Wrapping up all of the extra Knife of Dunwall and Brigmore Witches content along with the main game for this Definitive Edition delivers the fully realised portrait of the game world that Arkane have masterfully crafted. I do however find it hard to recommend this version of the title over previous iterations. It is probably the definitive console-based release, but even then it is far from perfect – with really grating loading times being the key offender.

I cannot recommend Dishonored enough to players who have never sampled its delights before, and am delighted that more gamers than ever before now have the opportunity to play it. Dishonored remains one of the most memorable, unique and repayable action titles in recent memory, and the libraries of PlayStation 4 and Xbox One owners will certainly been enriched by its arrival. It’s just sad that this remaster is a disappointingly lacklustre one.

I read review and this title dont buy it. Dishonored is a good game, it was a very good game 3 years ago, but now its simple not so atractive. This poor port has nothing more to offer than 3 years ago. Except the DLCs, which are added here. So… Read more »

I read review and this title dont buy it. Dishonored is a good game, it was a very good game 3 years ago, but now its simple not so atractive. This poor port has nothing more to offer than 3 years ago. Except the DLCs, which are added here. So… Read more »