Time to go ape as Donkey and Diddy Kong return for more pounding action, making their way from the Wii to the 3DS in this classic platforming adventure. Back and better than before will this king of the jungle take back his bananas from the mischievous Tiki Tak Tribe? Read on to find out. 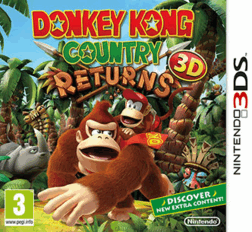 The story starts with the island volcano erupting, out of which comes the mischievous Tiki Tak Tribe. Now free, the musical Tikis make their way around the island, hypnotizing the jungle animals who then go and steal Donkey and Diddy Kongs hoard of bananas. Diddy Kong discovers them all gone and Donkey Kong notices the animals taking them away. A Tiki tries to hypnotize Donkey Kong but to no avail. With a smile you take control and deliver a pounding to the Tiki, sending it flying and start your journey to reclaiming your bananas.

Despite the move from the Wii and a TV screen to the handheld 3DS the graphics certainly make up for the reduced screen size. As a platformer the game already utilizes playing on different planes going from front to back and left to right, and the 3D graphics further enhance this and brings the island to life. The amount of detail and depth put in is simply amazing and the game has certainly been re-designed to utilize the 3D screen. The depth certainly gives you a new perception on the various platforms. Blasting to the background in 3D gives you that sense of distance. Not only are you smaller but all other details are too, making enemies harder to spot and judging timing and jumping distances too. 3D graphics make the surrounding environment pop out at you. Vines in the foreground will obscure your view which adds to the difficulty, even more so on background platforms. Not only vines but things like smoke and rocks will also make it much more difficult to navigate around. Sometimes things will appear as if they will literally jump out of the screen. Waves will come rushing from the back and crashing at the front, frogs once jumped on will inflate then fly out at you and butterflies will flutter across.

More subtle details which add to the beauty of the deep jungle are leaves floating down in the foreground and background and rays of light gently breaking through the foliage. Some levels whilst bright in daylight will tone down in sunset scenes and there are even a few levels where you play in black with only colours in small places that make DK and Diddy stand out with only a red tie and hat and jacket. Things that really add a wow in 3D are the train tracks and train that twist and turn as you pass through them. You will somersault through hollow trunks that show off deep angles and you will blast out of barrels going around pillars. Perhaps one downside to the 3D is your viewing angle. Move your head too much to one side or the system and the view will distort which can lead to your demise, however as with all games on the 3DS you have the option of playing in 2D if it suits you better.

The games soundtrack is very upbeat and catchy and will at least get your feet jigging to the music if not totally make you stop and have a little dance at some point. Along with all the ambient jungle sounds comes the jazzy jungle beat that gives the game a good pace to move to and keeps you going, lifting your spirits with an energetic beat. The music takes a different tone depending on the stage and level. On a sunset level it starts with a more mellow tone which then turns more upbeat then mellows out again. Music is also used for timing in one of the factory stages. Following the rhythm in time will help you pass obstacles however if you don’t hen you may end up losing your hearts. There also seems to be a certain blue round enemy that sounds a lot like Boos from the Mario series.

As a remake of Donkey Kong Country Returns on the Wii the gameplay remains the same with only some enhancements and extras. Fans of the DK series and those who played the original game on the Wii can enjoy the game at the same pace and difficulty in this 3D version on Original Mode, which is incredibly challenging!For those who found the original to be a little too difficult or for those who are new to the Donkey Kong series there is a New Mode. This new mode has been optimised for portable playability where people will spend shorter amounts of time playing than the Wii version and so the difficulty has been adjusted. In this mode Donkey and Diddy Kong have three hearts each instead of the normal two, allowing you to keep going for longer. New items can be purchased from Cranky Kong’s shop to help you out such as green balloons to rescue you from a fall and lift you back up to the platform, items that allow the mine carts and rocket barrel to take a second hit and there is also a portable DK Barrel so you can summon Diddy Kong whenever you like. As well as playing solo you can also partner up with a friend using Local Play andWi-Fi and work together throughout the whole adventure.

The island is split into eightareas, Jungle, Beach, Ruins, Cave, Forest, Cliff, Factory, and the Volcano. There is also a new additional area to unlock after completing the main game which consists of nine new stages to challenge you and your skills as well as the Golden Temple. In each level there are letters to collect that spell out K-O-N-G and golden puzzle pieces that are hidden. Collecting all of these will unlock extra content such as gallery images, movies, music and tough trophy levels. When you first start your game you can choose to play Original or New mode, but make this decision wisely as once you have chosen you cannot change on that file. The controls are all handled with the face and shoulder buttons unlike shaking around the Wii remote. You have the option to control DK with the Circle pad or D-Pad which allows you to play how you do best.

To pass levels you will make use of various moves and techniques. Pound enemies or pound the ground to stun or break through rocks or turn over panels to access hidden areas or reach the next platform. Do a barrel roll and knock enemies flying or smash down walls. Grab vines and walls to swing across gaps or saddle up on a rhino and smash down blocks in your way. Diddy Kong can also be found in barrels in various places which allows you to take more hits, however after two you will be on your own again and unable to make use of Diddy’s jetpack to help you get over those big jumps. Make sure to collect plenty of bananas on your way as this will help you gain those extra red balloons to give you that extra chance. If you do run out out of balloons Cranky will come and give you a few for free to help you out. Cranky also has a shop where you can buy various items to help give you an edge such as an extra hearts or invincible potion to take more hits, these can only be applied before you start a level. Cranky also sells keys which unlocks a new path and route through the area which works out to be a slightly easier way through other challenging levels and will get you through quicker if you do not wish to take on every level.

Each level has checkpoints looked after by a nice little pink pig, though the game could use having a couple more in each level as dying right before the next checkpoint then having to go all the way back can be bothersome. They are however a joy to see, especially on levels where you must fly through obstacles or run away from a large swarm of insects! Speaking of which, chase levels such as running from spiders are some of the hardest. Not only do you have to run as fast as you can but you must get past obstacles in the blink of an eye and collecting the letters and puzzle pieces is almost impossible to do in one playthrogh. These levels do show how important timing is in the game. You must have quick responses and plan your timing carefully to advance forward otherwise you may have a very long fall. There is a lifeline in the game if you should need to use it. If you lose many lives trying to beat one level at the checkpoint you have the option of using a Super Guide, a white Donkey Kong. This guide will complete the level for you if you are finding it too challenging however you will not keep any items he collects and he wont show you hidden pieces.

The games challenging levels will take even an experienced player a long while to master and hats off to you if you can complete a few without dying once as most will certainly need countless tries to beat. Not only does the hard gameplay make the game last a long time but you will need to replay the game to collect all the collectibles and unlock all the extras should you wish to get everything in the game. Once you have completed the main story you unlock eight new stages and the Golden Temple which present to you tougher challenges to beat.

Whilst there may not be a lot of new features to make players of the Wii version pick Donkey Kong Country Returns 3D up, it is certainly a great buy for those new to the series or this title. Even for those who have played this on the Wii I would recommend you give it a try for the New Mode and the stunning 3D graphics which just adds so much new life into the game, giving you a much more enhanced experience. Whilst the challenges often caused me much frustration for beating me I was determined to beat them and there was a great sense of relief and joy on each level completion. Now I just need to go collect all the pieces!