Fans of the Dragonball universe have been extremely excited for the release of Dragon Ball Xenoverse. This is a game that has been highly anticipated and it is finally here for fans to get their hands on. Bandai Namco have done an excellent job of promoting the game and building excitement among people who are not necessarily familiar with Dragonball Z. But with big hype comes big expectations. Does the game deliver upon the hype it’s been based around or does it add itself to the list of recent Dragonball games that have just not been good enough. Read on for more. 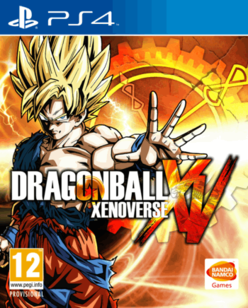 Xenoverse’s story is a re-imagination of the traditional and beloved Dragon Ball Z Sagas. Two evil time travellers, Mira and Towa, are going through time disrupting the course of history. Trunks makes a wish to the all mighty Shenron to bring forth a warrior capable of fighting by his side (or rather all of his battles for him!!). This brings you to creating your very own character! You can choose between being a Human, Saiyan, Namekian, Majin (Buu) and Frieza race (yes that’s what it’s called!). A huge part of the game is going to be spent with this guy or girl (YES GIRL!) so be wise with their name! I already regret mine even after the large portion of time spent trying to figure out a good Saiyan like name. Clothes can be altered at any time in the game by purchasing or finding new items for you to make your character look badass! You then spend time training your fighter to defeat these ememies, earning XP and levelling up. You have several stats that you boost over time, Health, Stamina, Ki, Basic ATK, Special ATK, Ki ATK.

This will be the base for going through each saga, correcting history and Mira and Towa distort time. Eventually you also come across Demigra, a demon god stuck in the crack of time, who causes even more problems! The story is familiar, but still has a twist that brings a fresh approach. It’s also very tough and it will not allow you to get through it quickly. Plenty and plenty of hours will need to go into this game in order to finish the story and it can get extremely difficult!

It would be fair to say that Xenoverse is the best looking Dragon Ball Z game we’ve ever seen. Of course this being the first Dragonball game on the PS4/Xbox One that should come as no surprise. Character models look fantastic and beautiful, as do environments. However, while environments are destructible, you’ll often find the floor to have a crater in it, only then to see the crater disappear and the floor return back to normal again. It would be amazing to see the destruction that remains not be resigned to houses and trees. However, that is my only complaint when it comes to graphics as other than that, the game is spot on in that department.

Xenoverse more than delivers on the audio front too. The game just wouldn’t sound right if the Funimation voice actors weren’t brought in, so luckily for us they are and they sound just as awesome as ever! It’s not just the voices that are done to perfection either. The sound of ki blasts, melee attacks and even flying are spot on. To be honest, for a game based off an Anime I wouldn’t expect anything less. They have had to get the sounds right for years in the show and Dimps will have known how important it is to match that.

The gameplay is the Xenoverse’s pride and glory, where it truly shines. Upon watching gameplay videos before release, I was intimidated by what I saw. I saw a game that looked spectacular, but was very unsure I could reproduce those moments of epicness. When you start the game, it takes you straight into a fight between Goku and Frieza. This is an open fight, no tutorial or instructions, however it is a golden opportunity to play around and experiment. Don’t worry though, once you’re a little further in and start the story you’re given a full break down of how to fight. This is invaluable. If you don’t understand how to fight you will not get the best out of this game. However, it is a simple task to get to grips with. Triangle for strong attacks, Square for fast attacks, X for jumping/flying/teleporting and Circle for ki attacks. You can use combinations of all four buttons to create dynamic and devastating attacks that can incapacitate opponents and cause real damage. The shoulder buttons are used too, R1 is used to target specific enemies, while L1 is used to guard. R2 is used for special attacks and L2 is for a boost while flying. R2 + L2 will then allow you to perform Ultimate attacks. It’s a simple button configuration, but it can really work well when put together. I’ve had intense battles based on strength/power and other battles based around a specific strategy of fighting from a distance. It very much reminds me of boxing/mixed martial arts. You can fight in many different ways and it creates so much variation in the battles.

You’ll find that as you go through the game and the missions get harder, you’ll need a much needed boost of life in the middle of a fight! Well that’s where items come into play. It wasn’t until my mid-thirties that I found myself in desperate need of health mid-fight. I soon found myself paying close attention to which kind of items to carry and use. To use items it’s as simple as pressing the right directional button and then using square, triangle, circle or x to choose the specific item you want to use. I’ve mainly used health items, but you can choose from items to charge your Ki, Stamina etc.

There are also items that restore health for all of your team members in Parallel Quests (more on those later). When it comes to the gameplay I am not very critical of any one aspect. However, cerrtain things can be refined. Sometimes you and your opponent can be punching thin air while upside down, but generally this will mainly happen when you are button bashing, which is something you cannot do if you want to do well in this game. Also, the text in the subtitles has quite a few typos and can look a bit odd at time! I’ve also occasionally seen clipping with capes on characters. All of those specific aspects are very small and more a case of me looking for things to pick at! Having said that, one thing I would love to see in a follow up game is the addition of an real open world. They currently have an open world-like environment. You can choose to go between Time Traveller missions fixing time, or go to shops to purchase items, clothes etc. All of that is great, but a real open world would be something to behold.

That said, Dragon Ball Xenoverse has more than enough to keep you glued to it for hours and hours of play in the story mode alone. Add to that the Parallel Quests you must do as well as training under your favourite Z fighter, and you’ll be hooked for a while. Even with those we haven’t even scratched the surface! There are Z fighters and enemies alike who ask for your help along the way! For example, Guldo asks for your help in order to earn himself a place on the infamous Ginyu Squad! Local offline battles are also a lot of fun. Fighting with your favourite Z fighters can add hours of enjoyment and will be my main source of entertainment once the story ends. The depth of characters is impressive and whats even more impressive is the diverse amount of costumes each character has. Each costume even has different statistics!

Then there is Online. Bandai Namco have been having server issues due to the surprisingly popular demand of the game. If they can solve the issues they have been having then they will have a masterpiece, with the ability for users to create teams and complete parallel quests with their friends. Then, you can battle online with them too!

This is one of my favourite Dragon Ball Z games ever. As a huge fan of the series I had enormous expectations on this game. Whether you are a fan of the game or not you can get in and enjoy it. The story is still familiar enough that new fans can experience the real thing while established fans can still experience something new too with the twist thrown in. There will be plenty of points I didn’t touch upon, but play the game and experience it for yourself! You also have the option of the Japanese or English dub which is amazing for core fans. The game, whilst not perfect, is damn good, a lot of fun, and oozing with depth.