It seems hard to believe that it was but a year ago that Dragon’s Dogma was upon us. Its tale of a common man whose heart is stolen away parallels this reviewer’s own experience with the game quite succinctly, and it’s inevitable that news of a second crack of the whip has resulted in ear-pricked anticipation. If you missed out first time around, our review of the game’s vanilla flavour can be found here, whereas those looking for a mere recap (if you’ll allow one to be vein enough to quote themselves) can be covered as such; “Dragon’s Dogma is a conundrum; in some aspects a masterpiece, and yet undeniably weak in others”. Whilst Capcom have made it clear they’ve acknowledged there is sufficient interest for a true sequel, it’s important to note early doors that this is most certainly not that sequel; rather an expansion to last year’s first offering. With this in mind, should fans have cash at the ready, or be more patient in holding off for the next title in the series? 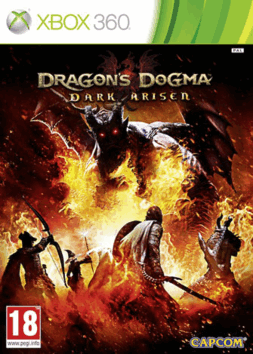 The most immediate surprise upon popping the game open is in finding not one but two discs; the second comprising of optional “HD Texture Pack” and Japanese language installs. With the original Dragon’s Dogma contained in full as part of the package, the former becomes considerably less impressive once you discover that on the first disc the original game’s content has had to be graphically downsized to make room for the new, and that this optional HD update is primarily to compensate for this and to restore the game’s original fidelity. Although anecdotally loading times and graphical performance do seem to have marginal improvements as a result of some tweaks that have been made, it’s still a messy and somewhat deceiving approach. Your ears are next up to play ‘spot the difference’, with the costs involved in re-licensing the B’z tune that originally accompanied the game’s title screen obviously proving too grand. As such, instead of a wonderful, cheerful, speedy rock number to open the game, you are granted a much more sombre and downbeat piece which falls very flat in comparison – at this point in the review, fans of Street Fighter IV may be quite rightly having flashbacks to its “Super” iteration and a similar loss of licensed music.

Gladly, a few of the changes are more welcome: a smarter equipment preview setup that also takes stored items into consideration being a particular favourite, on top of a fair array of new skills, items, equipment and so on too. One detail that players of the original game will certainly be relieved to hear is that they can carry across their save game from the original without any hassle whatsoever. Doing so also grants you a bonus 100,000 rift crystals and an ‘eternal ferrystone’ – attempting to address those who originally took issue with the game’s rather convoluted approach to fast travel around the map. The bonus rift crystals compensate for the fact that they’ve now been given additional roles – such as repairing broken rift stones and un-cursing loot found in the new content – but these are still quite small changes given returning players are unlikely to be trekking through the older areas again, or in any shortage of rift crystals for that matter.

Whilst the world of Gransys may have been wide and arguably quite sparse when it came to content, the decision has been made not to tamper with the composition of the game’s original peninsula too much, offering only minor alterations. Instead, Bitterblack Isle plays host to the majority of Dark Arisen’s newness, quarantining it away in a seperate land reachable only by boat. Blurb surrounding the game recommends that a character of level 40 is adequately prepared, although it’s worth noting that the term “prepared” is entirely relative – this is very much ‘end game’ content, and many measures above the original game in terms of difficulty. From its first level, the island’s labyrinth pulls no punches, and is stocked generously with heavy-hitting monsters both new and old, along with the usual array of traps and precarious terrain to traverse too. Whilst there are some good new additions to the cast of foes, many are quite transparently just re-skins of old monsters with increased damage output. Already testing encounters are often made exponentially worse too, by ridiculously tough super-bosses gatecrashing at random, often lifting a cowardly turning of tail from ‘viable option’ to ‘only hope of survival’. Whilst we at NGB gladly welcome a challenge, and do acknowledge that there’s an undisputed rise in tension whenever these moments hit, the reality is that trying to get a party of three reckless AI helpers to act accordingly is (still) akin to herding cats, and simply not feasible when pushed to its limits in such a way – and doubly frustrating in the knowledge that running off and coming back a few minutes later will likely see the same encounter play out normally, without the un-invited visitors.

Difficulty aside, the design of Bitterblack Isle isn’t particularly appealing, either. One of the most loudly celebrated aspects of Dragon’s Dogma was the wonder of its scale and the accuracy with which it created a vast, open world that convincingly moved through day and night. The word ‘epic’ is a vastly over-used one in the games writing world, and yet there’s no denying that the battles that took place were just that. Unfortunately though, Dark Arisen manages to ignore all of this celebration in truly baffling style, almost pushing you to contemplate if these previous highlights were but accidental genius, or that if the team behind Dark Arisen were asked to follow a strict design brief without any contact with the outside world. Plagued by perpetual night, Bitterblack Isle is a tiny, drab little place, and its labyrinth – the sole attraction – is almost entirely composed of dull, dank, claustrophobic hallways with an overbearing linearity. Whilst story was never a strong suit of the original game either, the new characters on Bitterblack are definitely of the throwaway variety, and there’s very little motivation offered up to push onwards aside from your own determination to prove yourself capable of handling the very worst the game can throw at you. Even those little nuggets of e-kudos, achievement points, are missing as an inspiration – presumably another result of this serving as a direct replacement for Dragon’s Dogma as opposed to more straightforward DLC.

Despite all of the negativity, those who didn’t play the original title would be wise to plump for Dark Arisen; Dragon’s Dogma remains a wonderful game – doubly so at this bargain price point – and it is certainly the definitive version of the title for now. For those who did play it though, there’s very little to recommend buying all over again – what little new content there is only serves to draw the spotlight back on to the game’s weakest areas rather than the strongest, and whilst some performance and UI tweaks are welcome, they don’t even begin to touch on the bigger issues the game still bears, and they are certainly of no recompense for the much more immediately obvious squandering of potential.