EA SPORTS UFC 2 has finally hit our consoles and I have had ample time to play and get to grips with the sequel to the solid but ultimately uninspired original. This is actually EA’s third attempt at an MMA game following EA MMA and EA UFC. Is it third time lucky or another lacklustre attempt to add to the pile? 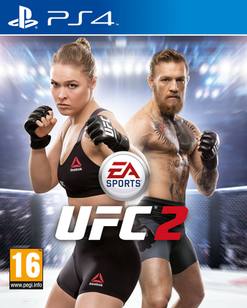 The first thing I want to address is how damn good this game looks. The first game in the series was pretty but the sequel blows it away. The attention to detail in everything from the fighters to the crowd is there in abundance. When in a fight with say, Connor McGregor, you can actually see his hair flying around and moving as he lands blows whilst fighting with his opponent. This isn’t done cheaply either; it moves exactly how it should, looking superb in the process. The body and facial modelling has is also visually superb, with facial expressions doing justice to the punishment being received, with bruises and cuts showing as they should, looking as brutal as ever! Now with the kit deal with Reebok in place, each fighter is also decked out in Reebok gear. Add all of this to the spectacular presentation that EA is famous for and you have the most authentic MMA title to date.

Although no significant changes have been made to gameplay, the little changes are sure to make a lot of players happy, but might upset a few as well! Standing, the game has not changed at all, block and modify your own shots using the trigger buttons, then use the standard buttons to punch and kick with your right/left limbs. The changes come when you take the fight to the ground. In the last game you were tasked with hitting the right analogue stick combination to perform or block transitions. This frustrated many new comers and wasn’t a friendly way for casual gamers to play the game. This also applied to when you and your opponent would clinch up, meaning two big aspects of the game became inaccessible to a large portion of players. Of course there were players who were able to get to grips and master this system. However, that has all changed now. Players do not need to input any combinations, instead simply holding the analogue stick in a specific direction, fill a circular bar until the transition has been performed. A much simpler and easier way to get to grips with grappling in the game, which will please casual gamers who struggled before. Although a lot of players would of spent time learning the controls and mechanics in the original UFC, a more simpler system can only be a good thing.

Something that has not changed however is the brilliant submission system which was introduced last year. No MMA game previously had come up with a system for submissions that had worked well enough and didn’t include button bashing before EA introduced this system last time round. A mini game appears on the screen and asks you as the attacker to block the defensive moves of the defender, then at the correct time, quickly advance your own position. It’s a chess game on the mat of an octagon and it is still the best way I’ve ever seen submissions represented in a fighting game. One of my personal favourite aspects of the game is how fighters can replicate their real life self. A big example of this is Dominic Cruz, who has an unorthodox stance and moves in a very specific way. He has been brought across flawlessly, down to little nose touches during the fight. It’s these little details that really add to the level of authenticity throughout the game.

One of my only gripes with the gameplay is how some fights finish. KO blows don’t always feel as hard hitting or natural as they should in standard mode fights. All of the notion of KOs happen in a rather unnatural and more importantly, unsatisfying way. This isn’t the case with every KO but I have experienced it more times than I would of liked.

Okay, let’s get to the elephant in the cage. Game Modes. The last UFC game was abysmal when it came to game modes. It had a Career Mode that lacked in longevity, had horrible match making, almost always matching you against AI created characters as opposed to actual real fighters. When it did give you real fighters it gave you the same ones over and over again. A huge lack of variation plagued it and didn’t inspire you to go through a second career. This year I am happy to say this is no longer the case! Whilst you do go through AI created fighters to begin with, once you have worked your way into the UFC from The Ultimate Fighter you are given a big step up in competition, if sometimes a little too quick! This still may depend on your progress and results as the match making is decided via the UFC rankings and your win/loss ratio.

EA have also treated us to a few brand new modes to keep you sticking around once your fighter has been forced to retire by an ever young looking Dana White. Knockout Mode is wildly fun and is much more like a standard arcade fighting game like Tekken or Street Fighter. The ground game is off limits here and you must punch and kick your opponents head or body cleanly to reduce your opponent’s health and land a devastating, and I do mean devastating, knock out blow. Earlier I mentioned the unsatisfying feeling of KO’s, however this isn’t the case in this mode which is literally all about knocking your opponent out cold. We also have a few other small modes, namely Custom Events and Live Events. These enable you to create a fantasy card and predict the results then play a real life one. These are small but extremely welcome additions!

The biggest addition to game modes is easily EA UFC Ultimate Team. EA have successfully brought across their most successful game mode from FIFA and adapted it brilliantly to work with UFC. You create a character (you can even use EA GameFace), then use packs to acquire skills and moves to improve your character. You can create up to 5 characters across 5 weight classes, male or female. It is a shame that you cannot access all weight classes but this is only the start and I believe EA have big plans if this initial period goes well. Use your character to then progress and take him/her to the Octagon against Human/AI opponents to win your UFC Championship.

As much praise as I am giving this game, there are a couple of other flaws I should point out. The sound in the game is amazing and I have no gripes around that. Unfortunately, the same cannot be said about the commentary. It still sounds as scripted as ever, opposed to the natural and spontaneous commentary we see in UFC today. Commentary is one aspect that I am sure is hard to master but unfortunately, EA have failed to even come close with it in UFC 2.

Overall, EA SPORTS UFC 2 offers a beautiful, authentic experience. Whilst there are flaws in UFC 2, EA have done so much right this year, giving me hope for the future. Both Hardcore and newcomers to the series will both be very happy with what in on offer.. EA have done a brilliant job with UFC 2 and if they support it the way they supported the original, there is a lot more we can expect from UFC 2 down the line.