Earth Defense Force 2: Invaders from Planet Space has finally made its way to western shores after it was initially released only in Japan under the title ‘Global Defense Force’. With its big brother, Earth Defense Force 4.1 also coming out at the same time on the PlayStation 4, could the Vita title stand up and be counted? Unfortunately not, and I shall explain why….. 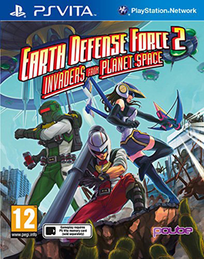 Let’s begin with the story shall we? If you haven’t played any of the Earth Defense Force games before, not to worry. I too was in the same boat, but thankfully the story is simple enough to understand. There is no complexity it all, just a group of giant ants have invaded the world and intend to cause chaos. Whilst I wasn’t expecting a James Cameron style plot, it did disappoint me at how lacking it was, leaving me feeling rather underwhelmed.

Underwhelmed is a word that describes Earth Defense Force 2 down to a tee, especially the visual side of it. I have played many PlayStation Vita titles to know that it can output much better graphics than this game does. I honestly feel like I am playing a PSOne or early PlayStation 2 game, it really looks that bad. I understand that it is supposed to be ‘all about the fun’, but there is no excuse for the poor visuals on show here. There was a time that my character decided to warp out of the ground into some grey sea. Not something you would expect from a PS Vita title.

Unfortunately, the gameplay doesn’t really improve the game much either. The game is split into bite-sized missions where you are chucked into a city and given the task to empty it of all the enemies which can be seen on then radar at the bottom of the screen. Before each mission, you are given the chance to take on the role of one of three classes; Infantry, Pale Wing, or Air Raider. These classes differ from each other. Infantry is just your basic soldier, using the more conventional weapons that you would find. Then you have Pale Wing, whilst also a soldier, she is equipped with a Jet Pack and will be more suited in the air than on the ground. The third class, Air Raider, is a completely new class that wasn’t included in the original release in Japan. Using more deployable weapons, the Air Raider is more suited to a supporting role, especially when you are playing co-op online. 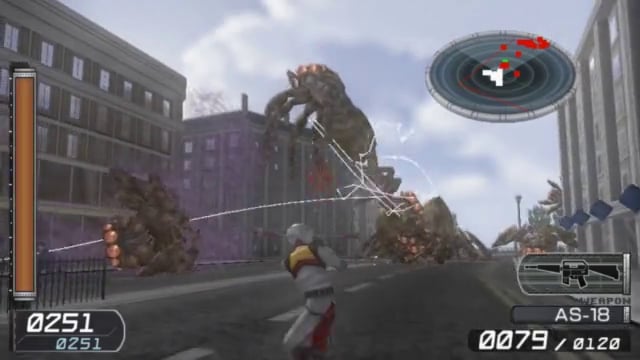 As you play through each mission, you can upgrade your chosen class’ stats, whether that be their overall HP or weapons available to them. There are a ton of weapons throughout the game that you can obtain, mostly through when you kill enemies and they leave weapon drops. From rifles to air-strikes and grenades, there is definitely a wealth of weaponry available to you. You don’t have to stick with one class throughout the game either, you can choose to switch the class at any given time. However, Infantry was my class of choice through the single player campaign, as the other two didn’t really offer much more in terms of straight out combat. As I said previously, missions are basically the same throughout the game. There is a little variation in terms of some of the enemies you face throughout the game, but the overall concept is exactly the same. What doesn’t help things is the AI of those enemies. Too many times there was a flock of ants or UFOs all in one spot, then there would be one or two at the other side of the map. Being Infantry meant my soldier wasn’t the fastest, meaning that it would take quite a bit of time in order to get to the other side in order to beat them and complete the mission.

Of course, you do have the ability to play online co-op with your friends in order to make the experience somewhat less tedious. However, that is when it works….. there were so many times me and another NGB member of staff couldn’t connect to the multiplayer, resulting in an error frustratingly ending our time. However, I did manage to swoop in to another multiplayer game (pure luck after so many times trying!) and that did make the game a little more enjoyable. You can strategically plan what class each of you will be and get through the missions quicker and more efficiently.

My time with Earth Defense Force 2: Invaders from Planet Space was a disappointing one. From the mediocre visuals to the repetitive nature of the missions, I really would not recommend this until it was made free on PlayStation Plus and you could get together with a group of friends. There are too many problems with this to warrant it anything more than below average. If a completely new Earth Defense Force title was to be released, I would be interesting to see how it pans out, but for now, there is no defending this.