Earth Defense Force has been pitting humankind against overzealous giant alien insects for a while now. This latest release, which is essentially an updated version of Earth Defense Force 2025, comes to European shores with the goal of improving some of the visual and gameplay issues the aforementioned version suffered from. Whilst this latest release does retain the relentless shooting merry-go-round that enticed its small but dedicated fan base, it will most likely continue failing to appeal to a wider audience. 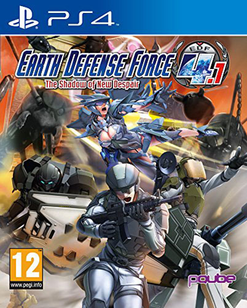 I’ve always enjoyed arcade experiences as much as the next person, particularly when I was younger – sometimes simplicity can win over everything. These days I generally enjoy my in-game time a little more fleshed out, or at the very least something with a little more purpose and reward. If you’re reading this and think you might be of the same ilk as me, then there’s a strong chance you’re not going to find much lasting enjoyment in Earth Defense Force 4.1: Shadow of the New Despair. Having said that, there’s no denying that deep down in all of us there’s still that arcade-carnivore that twitches at the thought of simply shooting lots of the things with lots of different things, and therein lies EDF’s strengths, ones which can’t be totally ignored.

You’ll understand what the developers were going for as soon as you hit the title screens. The feel and presentation all scream old-timey arcade booth as its beeps and dings through menus over a 90’s action film-esq symphonic rock backing track. Don’t get me wrong, it’s not a retro game in execution and neither does it take itself too seriously, but it’s definitely retro in spirit and you’ll feel that vibe throughout. Perhaps no more so than in the narrative, that merely sits on the notion that the aliens have returned since the last game and are attacking Earth in the form of giant bugs/robots/UFOs. As expected, it’s your job as part of the Earth Defense Force to vanquish the threat in any way you can.

The story (or lack thereof) isn’t really an issue as the game primarily basis itself around the shooting, and that’s fine. What might grind on some players is its frivolous nature to dialogue and mission advancement. There’s no real introduction on entry to new areas that hold any value, and radio chatter from scientists or random important figures can border between pointless and unhelpful, to just silly and annoying. There’s a fine line between B-movie satire and senseless filler and I found the needle flickering either side of that line a little too often for my own taste.

At a glance, EDF’s visuals have improved a little but nothing too far removed from its average looking predecessors. The sharpness is nice, but they’re unfortunately marred by the series’ familiar issues of screen-tearing and dropping frame rates – especially on busier screens which, let’s face it, is most of them when you’re facing a colony of ants scurrying between buildings. I did quite like the large, open level design which seemed to lend itself to the situation well. Tall buildings covered in webs and giant spiders can be horrific when you get up close, and with the occasional structure crumbling around you as a result of large blasts, things can get tense quickly in a highly immersive way.

It’s in these areas that the game finally grabs your attention. Whilst the shooting does feel a little clumsy and imprecise, there’s no doubt that it can be entertaining when that base-instinct of gaming kicks in and the clearing of enemies with all manor of firepower becomes your one and only priority. For some reason, launching a rocket into a huge bug and watching the juice spurt into the scenery never seems to grow old, and EDF asks you to do it repeatedly without any respite, leaving you with no choice but to humbly oblige. You’ll be able to do so in a variety of different ways, too. There’s four classes that all offer unique play styles from basic assault to jetpacks and vehicle based support, each with their own weaponry to unlock through pickups and leveling. The classes hold plenty of content and variation in gameplay just on their own, adding some extra beef to the game’s 80+ missions.

This latest iteration of EDF manages to add some online multiplayer to the staple two-player split-screen co-op. With up to four other players the levels can feel much more dynamic with friends than it does with just the brain-dead AI for company, even if it’s only to have someone to chuckle about the ridiculousness with. Whilst gameplay remains largely the same, regardless of classes or any attempt at putting together a strategy, there is some value to not going alone; dedicated four-player levels for one, and then there’s a local 1v1 mode that does add some, albeit short-lived, charm to the package.

The lasting feeling of Earth Defense Force 4.1: Shadow of the New Despair is one of slight emptiness, although it’s not void of fun factor altogether. Play it long enough and you’ll get into a groove continuously shooting things, and you’ll want to keep shooting those things until they’re gone – in the same way you’d be compelled to fill in a colouring book or make sure there’s no bubbles left on a sheet of bubble wrap. Its main faults have been the same since it began, so it’s safe to say that if you’ve enjoyed the series in the past, you’ll be more than at home here. For the rest of you, it’ll most likely struggle to capture your attention in a way that keeps you coming back for more, even if the initial blasting makes for a nice distraction.