After a slightly prolonged wait, the creators of Left 4 Dead return to the multiplayer scene with Evolve, an asynchronous affair with four players taking the role of humans and hunting down a single player controlled monster the size of a small house. After a tumultuous approach to the game’s launch, how does it stack up in the competitive multiplayer arena? And, more importantly, can I get through this entire review without any bad “Evolution of multiplayer” puns? 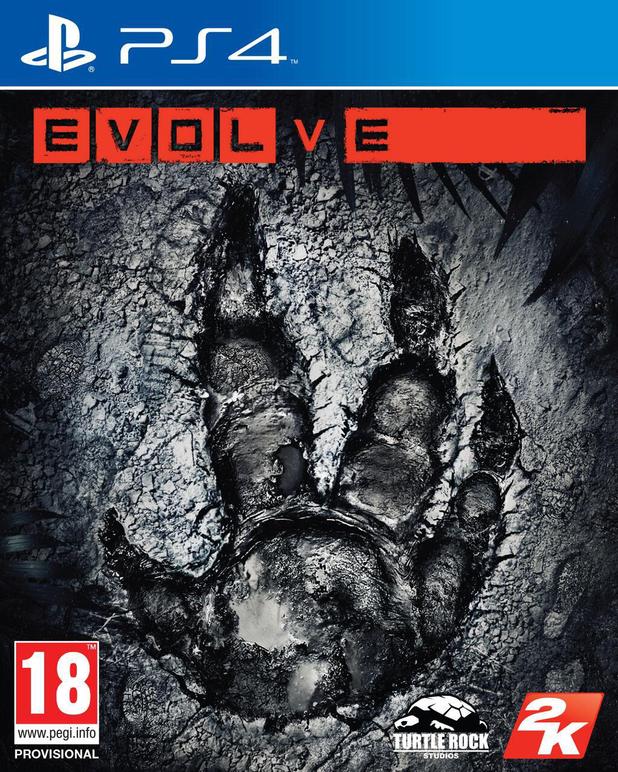 First off, let me address the rather large elephant in the room. Evolve has a rather large amount of DLC available at launch. Evolve also has a somewhat confusing future DLC structure to it as well. If you buy the “Hunting Season Pass”, you’re not automatically entitled to all of the content that gets released over the game’s lifespan, and if you’ve not picked up one of the first wave of copies that hit retail, you’ve probably not got the “Monster Expansion” pass, meaning you’re going to have to fork out an extra tenner in a few months if you want to play as the Behemoth. Got all of that? Good. I’m going to state right here that I don’t perceive this as a problem. Turtle Rock have stated that all new maps will be free for all users, and anyone who doesn’t buy the future paid DLC can still join in with anyone else who has picked it up. It’s a strategy that won’t break up the player base, unlike most multiplayer focused games that will fragment the community when new map packs get released. ALL of Evolve’s Day 1 DLC is cosmetic. There is nothing that is in the store that has any effect on gameplay whatsoever. The fact that there has been a confusing message put out by 2K has wound some people up into thinking that a lot of the content will hurt their experience. What annoys me is that this has clouded people’s judgement of the game before they’ve even touched it (and in fact ‘boycott’ the game), yet they’re quite happy to continue to play Advanced Warfare, which has a similarly ridiculous amount of skin packs available. I’m not condoning poor business practices in any way, shape or form, but the nature of a lot of the outrage certainly seems overly manufactured.

ANYWAY, that aside, let’s get on with the review.

It’s been a while since Turtle Rock brought us the concept of Witches, Tanks, Smokers and Boomers with the perennially fun Left 4 Dead. Taking the four-player team based gameplay a step further, Evolve introduces classes into the mix, with a typically set out team of an Assault class, a Medic, a Support class and a Trapper. Each of these classes has their strengths and weaknesses, but it’s the way in which they complement each other and work together that help define Evolve’s matches. Whilst Left 4 Dead had you facing swarms of the fast-moving undead, Evolve sees you face off primarily against a single moving target. The difference this time? That monster is fully playable as well, turning the tables if you decide you want to go on a bit of a Godzilla themed power trip.

Starting off with access to the four base hunters and Goliath, the first monster, you can either hone your skills offline or jump straight into an online fight. I’d recommend going through the tutorials as much as possible, and getting used to the mechanics of both the hunters and the monster, otherwise your online experience might be a lot shorter than you’d be hoping for!

The story in Evolve is as simple as you’d expect it to be for a game that’s sole focus is the multiplayer. The planet of Shear has been attacked by swarms of huge monsters, and you’re in part of a team that’s tasked with destroying them. That’s about it, although there are some hints of backstory throughout the game that make me wonder what an extended single player campaign would consist of. There’s no such thing, of course, but that doesn’t feel like a bad thing, and in my opinion would feel very forced if it were to be included.

Evolve’s human gameplay is very much focused around teamwork and the ability to communicate with your partners. Put simply, you need to play your class and talk to your team. If you don’t, then chances are you’ll find yourself on the receiving end of a beating more often than not. If you decide to go it alone, you’ll probably get caught by some wildlife and die. If you decide to ignore healing your teammates as a medic, they’ll die. If you decide to focus on damaging the monster as a support class, you’ll probably die. If you forget to deploy the mobile arena as a trapper, the monster will escape, level up, and… You get the picture. It sounds like a cliché, but Evolve is definitely “Easy to learn, hard to master”. Picking up on the nuances and tricks of each of the human classes is something that will take a while, but when you do, and you learn how to focus your abilities with your fellow hunters, it’s extremely satisfying. The first time you ensnare a monster with your harpoon as a trapper, whilst the support class calls in a phenomenally powerful airstrike, you can’t help but grin like a Cheshire cat as you see the monster’s health bar plummet. As you rank up your characters, you begin to realise that certain combinations of hunters will lead to some devastating effects. As previously mentioned, the trap/airstrike combo is fantastic for massive damage to the monster, as are some other combos unlocked by obtaining some of the later hunters.

Playing as the monster, however, leaves you to your own devices. It’s you against the world, as you forage for food in order to gain armour, and level up (or, as the title of the game would suggest, “evolve”). At stage 1, you’re going to find it difficult to do much damage to the hunter team if you run into a fight. Stage 2, it’s probably going to be fairly even, and at stage 3, you’ve definitely got the upper hand. Each of the three monsters have similar-in-concept yet wildly different-in-practice special skills that get stronger as you level up, which helps you turn the screw on your opponents as you progress. Also on your side is the ability to sneak around, which disguises your footprints, allowing you to lead hunters down one route with some heavy-footed running, then sneaking off down back down the route you came and scuttling off to another part of the map and get your feed on. As the monster, you have two ways to win. Either kill all of the hunters, or reach stage 3 and destroy the power relay on the map. It’s important to remember that you can win via two methods, as once you’ve hit two of the big damage-dealing hunters, you can get hung up on taking them all out, without remembering that there is a respawn timer in the top right (it’s set to 2 minutes, so you should have plenty of time to destroy the relay). It’s a nice twist on the kill or be killed gameplay, and sometimes forces some on-the-fly tactical decisions.

Graphically, Evolve looks nice on the PS4. The textures, whilst doing themselves no favours as you parachute into a map and see them being replicated, are nice and sharp, as are the multitude of effects from both sides’ armouries. The only drawback is that Shear’s environments sort of blend into one, and the maps, while impressively detailed, don’t feel all that unique. With Shear being a planet colonized by humans, it’s presumably ripe with abandoned cities, which conjurs up some images of urban chaos with the likes of the Wraith darting in and out of abandoned buildings and streets. It’s a minor knock though, as what’s there does look impressive, it’d just be nice to see a bit more variety.

Speaking of variety, there’s more to this game than just the hunt. There are a few more game modes in place here, including the “Rescue” mode, where the object is to aid or kill 5 survivors of an attack; Nest, which has you battling to destroy or save a set of 6 monster-sized eggs, and Evacuation, a 5-match mode which boasts tens of thousands of match combinations thanks to the way bonuses are applied throughout. It would be nice to see a little more variance in the game modes, but ultimately you’re here to hunt, as the game makes clear from the get-go.

All in all, Evolve is going to be a game that gives back what you put in. If you can team up with some friends, or some random players that know what they’re doing, you’ll have a fun time with the hunters and it’ll lead to some intense battles. If you get one or two that want to play it like Call of Duty, however, you’re going to find it a frustrating experience. Hopefully as time goes on, the player base will collectively learn the “right” way to play the game, and as they do, it’ll become a much more robust environment for everyone. It’s the same issue with every online-focused title, and Turtle Rock seem to be committed to ensuring that the playing field remains level. Hopefully they will prove to be just as committed in keeping the game fresh with new maps and modes as well!

Arguments about DLC structures aside, Evolve is a fun take on traditional class-based multiplayer. Whether you decide to be the hunter or the hunted, there are plenty of moments in Evolve that will have you on the edge of your seat, and as long as you play to your class, you’ll have a good time. Whether the legs are long enough to keep the game running for an extended period of time remains to be seen, but as long as they can keep it as fun as this, I’ve not got many complaints at all. And that, I’m proud to say, is an entire review without saying that “Multiplayer has evolved”, or any other terrible puns.

Editor-In-Chief - NGB Started writing for NGB in 2013, 3 years later I was running the show. I love what we do here, if you want to get involved, get in touch! PSN/Xbox LIVE/Steam - Winstano