For the last few years, F1 fans have been treated to yearly multiplatform releases of Codemasters’ authentic and licensed F1 franchise. F1 2010, 2011, and 2012 however are not all that Codemasters have got out of the Formula 1 license. F1 Online, which combines management and top down driving, was released earlier in the year.

F1 Race Stars takes a rather different tact – aiming to provide a traditional karting experience themed around the World’s most popular motorsport. How good of a fit, however, is the deep, serious and complicated world of Formula 1 to an arcade, inherently silly family friendly experience? 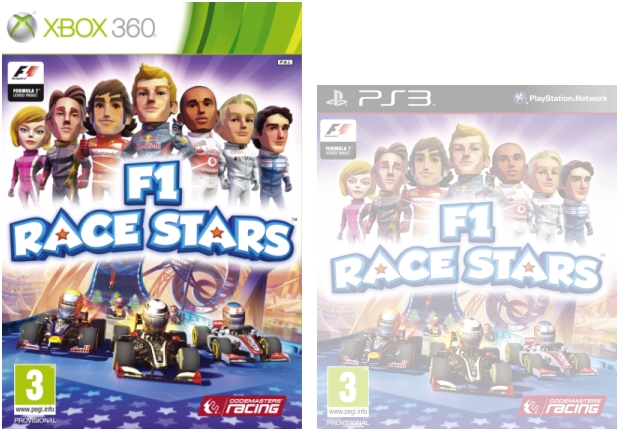 What hits you immediately, is that F1 Race Stars is a really attractive game. Codemasters have proven handily with their flagship series – F1, DIRT, and GRID that they can deliver realistic graphics across platforms. Their talent is proven in an altogether different manner with Race Stars’ 60FPS, soft and smooth approach.

Visual creativity shines through  particularly across the eleven tracks which come with the game. Very loosely, each is based on a real world track, but outside of one or two corners per track, things tend to go a little bit mental, playing off national pastimes and locations.

As example, the German track encompasses a couple of corners vaguely like that of Hockenheim, before a trek through a medievil castle and a final stretch down the Autobahn, whereas the Brazilian track ventures through a wacky rainforest. It’s a comical approach which works well, providing variety and amusement down the road.

Each of the 24 current drivers have received similar attention, and their big headed, hilariously voiced caricatures fit into oddly proportioned and authentically liveried cars.

Alongside the real teams and drivers, there are a couple of fantasy teams. These include three female drivers, a wise decision in a family oriented game, but it’s perhaps a pity they didn’t offer more realistic candidates – the few, but not nonexistent women from F1’s past and present.

As for gameplay, F1 Race Stars seeks to emulate the hilarity which makes games like Mario Kart so popular, but with some significant deviations. The biggest one is that drifting is out the window, which apparently is done to be more true to F1 – somewhat odd considering that in almost all senses the link to F1 is only skin deep.

Instead, the cars in Race Stars are more planted but suffer from understeer, forcing a smooth driving line. To replace the minigame that drifting provides to most arcade racers, F1 Race Stars has a feature called ‘KERS corners’.

Around every KERS corner is a turbostrip. When you leave the strip, you receive a boost. To get the biggest boost however, you’ll need to charge the boost as you turn, which requires repeatedly letting go and repressing the trigger. Doing this while coping with the corner, and whatever else might be going on certainly takes skill. Drifting may be a mainstay of almost every other karting game, but this alternative is certainly different, and not half bad.

Alongside this, there are 13 different powerups to help yourself or thwart your rivals. A few are F1 related, such as the safety car, which slows down the leading pack, wet weather, which causes the rain to start but gives you, and you alone, wet weather tyres to survive it, and the DRS boost.

The rest are all fairly predictable. There are a variety of different bubble attacks which will briefly slow an enemy down inside a bubble when they hit. You’ve got a bubble which ricochets off walls, one which hones on an enemy, one which lies on the track in wait, and so forth. They tick the boxes, but because they all look the same (barring colour), and all do the same thing when they hit, it feels like a chance missed.

A couple of the powerups feel downright cheap. Both the teleport and bottle rocket serve the same purpose – they simply and automatically move you up the pack. I’ve occasionally gone from last to first using them. It’s frustrating for the opponents who get passed, but it’s not even remotely satisfying for the driver who uses them either.

The final major twist to gameplay, come in the form of the special hidden shortcuts which require a key to enter. On each track there is a hidden key, which usually requires taking the long-way-round, and a hidden door, on the other side of which is an enormous shortcut.

Only one driver can ever hold the key at once, and if the key carrier gets hit by a powerup they drop the key. This can make getting the key to the door a little difficult, as it can be stolen, but, the reward is so big that it will all too often win the race for you on its own.

Due to the variety of extremely effective powerups and the shortcuts, there is a large tendency for the pack to get irreversibly split up. Though there various rubber banding effects to try and close up the pack (like the safety car), it doesn’t tend to do a particularly good job. Races can too easily become split up and, whether you’re coasting at the front or miles behind, not that fun.

Critically, F1 Race Stars does allow up to four players in split screen play. More than that though, you can play splitscreen in both the Career Mode and Online – which does make it stand out from the crowd. It sounds simple, but so many games consign split screen play to a one-off, feature light mode on the side – in F1 Race Stars it’s the main course, and the game is so much the better for it.

The Career mode challenges players to compete over a horde of different multi-track tournaments. Things are kept from getting dull with a variety of different objectives and modifications.

For example, there are Refuel Races where you run out as fuel as you drive. If you run out, you slow to a crawl, so you have to pick up more, but if you pick up too much you are slowed down by the fuel’s weight – it’s a clever, and unique idea mode which emphasises some of the strategy and some of the risk v reward that Formula 1 is truly all about.

Modifications include mirrored tracks, endless boosts, HUD removal, or even reversing the pole driver’s controls. All these different modes and mods can be used online in Private games, and offline in custom games.

Online racing features up to 12 players (the same as offline play), and this is filled up by AI drivers if you can’t make the numbers. In my few attempts playing online, I had some issues with lag and connectivity, causing a lot of warping around from my opponents. It also takes a bit too long to get into a game for my liking, when really this is a game which should emphasise a quick and easy online experience.

Finally, the game features a time trial mode so that you can post your hottest laps to the leaderboard, but frankly without other drives to compete with, it’s a pretty dry affair, and nowhere near as addictive as Time Trial modes can be in more realistic racers.

Even seven years into the generation, there is still a notable hole when it comes to seriously good karting games in the Xbox 360 and PlayStation 3’s lineups – a game which can provide endless, variable multiplayer fun.

To an extent, F1 Race Stars does achieve this, but the formula too quickly becomes repetitive, and too rarely provides great races. The F1 license is used sparingly, and it’s hard to imagine it will be enough to entice F1 fans to buy. This is a karting game first and foremost, and frankly, you wonder what kind of game they’d have been able to make if they weren’t constrained by the license.