Kinect, such a frustrating device, yet all this time after its release it still has massive potential, if it was only managed right and developed into the right game that many Kinect fans deserve. Fable, such an iconic game for Microsoft, spanning back to the original title back on the original Xbox. Lionhead Studios have taken the bold move and created a spin-off title which sees a Fable title controlled with Microsoft’s motion sensor device. Was it a shrewd move and can it finally give Kinect some positivity that it desperately needs? Or is this again, one of the many list of titles that have failed to live up to the hype? Read the review below to find out. 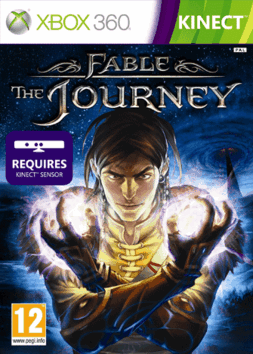 With many Kinect titles out there, the story always seems to be short and sweet with no time to focus on getting to know the different characters and their traits, but it’s finally good to say that with Fable: The Journey, this has all changed. Lionhead Studios are known for strong story telling in their games and with this title, it’s no different. Set 50 years after the events of Fable III, players are put into the role of young dweller, Gabriel, who is accompanied at his side by his trusty horse, Seren. Throughout the game, Lionhead bring the relationship between Gabriel and Seren into the fray and it’s very good to see how the relationship and bond between the two develop as the game furthers.

As like many youngsters, Gabriel tends to ‘slack’ and falls asleep which then makes him lose the rest of the Tribe on the way. Whilst trying to find solace and attempting to find the rest of his Tribe, he meets blind seer, Theresa. She warns him of an evil force that is coming to take over the lands of Albion, The Corrupter, and it is up to Gabriel to gain three magical forces, with the use of the Gauntlets, to stop the evil force from taking over his home. It’s great to see such a great story gracing a Kinect title which are usually made up of 10-minute arcade games rather than a fully fledged title.

The graphics in Fable: The Journey are certainly not to be dismissed. Whether it is going through the different trials or going through a fire-ridden forest, it seems that Lionhead Studios were right on the mark when visually designing the game. The game is also built from the Unreal Engine 3 which certainly makes the animations in the game a lot smoother than others. Theresa and Gabriel will sometimes comment on how great the view is which is completely correct and will certainly make you want to bring those virtual reins to a halt in order to completely appreciate what Lionhead Studios have done with Fable: The Journey.

Ok, there aren’t beautiful CGI cut scenes that seem to grace many games of today, but with this latest Fable title, it certainly doesn’t need it. Enemies in the game such as Trolls and Hobbes are also designed very well and certainly take their place in the game.  The game’s menu system is also represented well visually with a little screen showing up at the top to show you if you’re too close to the Kinect sensor, but it doesn’t come up as a frustration and ruin the visuals of the game at all.

The best thing I can truly say about the sound in the game is the Kinect Voice Recognition feature that is in place. Lionhead Studios seem to have it spot on and rarely does it mistake your voice to mean something else. One good thing is when you are resting up with the horse. A prompt comes up which tells the user to stroke the horse using gentle hand movements and also use your voice in a gentle tone. I found that with just using a gentle voice, Seren would calm down quite quickly as opposed to if I just shouted at the screen. Ok, maybe just a small detail there, but there are games that seem to do whatever they want regardless of what you’re saying or doing.

Each menu option can also be activated by the use of the voice and once said, the menu option that I said tended to come up straight away without any lag or confusion as to what I was actually saying. Apart from the actual Kinect features, the game’s sound is also quite decent with tense music when battling and going through trails in dungeons. The voice acting can sometimes make you question if they actually meant something else rather than the point they were trying to come across but overall, it was ok.

Yes, the graphics, sound and story are handled quite well in the game but what really matters in this review is how the Kinect sensor reacts to the movements. There has been plenty of games that are written off, and rightly so because of disastrous lag and not doing the action that the user is gesturing. Based on my experience with Fable: The Journey which is made up of about 13 hours, I can say with a smile on my face (apart from an aching arm) that the Kinect works quite well *faints*.

Okay, there are little niggles in the game, but it really doesn’t ruin the experience at all for me. Kinect’s main features in the game come from controlling the virtual reins of your cart for Seren and casting spells to your enemies. For those wondering, there is a guide for learning how to control the reins and each spell once acquired which lets you become a custom with the controls. When controlling Seren, there are three speeds in which he can travel which are trotting, jogging and sprinting.

Trotting and jogging can be locked on with a thrust of the reins. Sprinting can only be used for a certain amount of time unless you cause Seren’s stamina bar to empty and his health bars diminish. You can slow down by pulling the virtual reins to your chest or come to a complete holt by pulling the virtual reins over your shoulder. Although you are riding Seren for a large portion of the game, it certainly is a fun experience as you weave through obstacles along the way. You can turn left or right by pulling on the corresponding rein and it certainly feels very responsive and gives the impression you are actually in control of a cart.

For spells, this is a bit more complex than just riding Seren, but again it gives for some great battles with your enemies. I will advise though to take regular breaks which the console will advise throughout the game. Not doing so ends with much muscle pain in your arms which I unfortunately found out. Gabriel spells consist of Bolt and Push which can be upgraded through progressing further in the game such as learning the use of Fireball and Arrows, and by the use of Upgrades by which you collect orbs whilst riding Seren. These orbs are red, green and blue. Green, you can collect at all time whilst red and blue you can only collect if you’re jogging or sprinting.

Near the beginning, you will get used to the magic spells in a tutorial-esque section which also acts as a target calibration for Kinect. This allows you to give more precise movements to where your spells are cast, although in the default and manual calibrations, there is an element of automation in both. The attack spells which include Bolt and Fireball are also used by raising your right hand to your shoulder and thrusting forward. Arrows are used by putting your hand behind your shoulder in the recreation of throwing an arrow. Between creating the gesture and the action happening on screen, there seems to be minimal lag which really lets you dispose of your enemies quicker.

The Push spell is done by the raising of your left arm and thrusting forward. This can be used smartly, whether it is to knock your oncoming enemy out of the way, or to lower a bridge or to solve a puzzle. There are visual prompts throughout the game which give aid on which spell players need to cast in order to be successful.

The main story section of the game will take you roughly 8 – 10 hours long to complete, which for me is a delight considering how short and sweet most Kinect titles are these days and gives the game that bit of depth that a Kinect game needs. There is also an arcade mode available which allows you to play through the harder parts of the game including bosses in order to get a high score, or just to test your casting abilities and defeat tonnes of enemies that come your way. It would of been good for the developer to be able to add even more depth into the game and make it that bit longer, or also add different difficulties to really see if your spell casting is up there with the likes of Harry Potter.

It’s been a tough few years for Kinect fans with more failures coming to the Xbox 360 device than successes, but it’s good to see Fable: The Journey giving it a bit of credibility at last. It’s going to be interesting to see if developers can build on the strengths that the Kinect sensor clearly has and if more games in will follow Lionhead Studios’ excellent effort. A couple of years too late for sure, but with Fable: The Journey, Kinect has finally arrived.