Open-world first person shooters have often been a hit-and-miss affair over recent times, but few titles have managed to encapsulated the genre quite as well as Ubisoft’s Far Cry series has. With two well-received games, a host of spin-offs and an forgettable movie tie-in, Far Cry 3 has landed. Has Ubisoft managed to build upon previous titles or is this just another release that attempts to milk an already established franchise? Read on to find out. 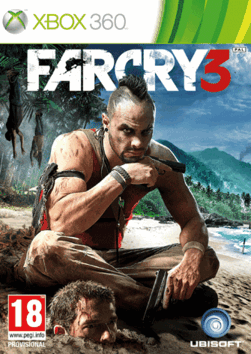 Far Cry 3’s sumptuous tropical island paradise plays host to you, Jason Brody – a young American unaccustomed to the violence and hardship he soon finds himself thrust into early on in the game. We’ve all been there; that perfectly innocent twenty-something group holiday twisted into chaos by a kidnapping deranged psycho, who inevitably provokes you to upset the natives and fashion the local wildlife into rucksacks.

As it happens, the mentally unstable antagonist in question, Vaas Montenegro, is cleverly portrayed. Constantly teetering between volatile outburst and self-awareness of his own madness. It plays well against Jason’s uncorrupt demeanor towards the situations he’s forced into and it’s certainly made clear that Jason is no killer, at least initially anyway.

Opening scenes introduce you to the group skydiving and generally enjoying their time on the island. It’s not long, though, until the screen pans and you realise it’s all just a phone recording you’re being forced to watch from your cage prison. Jason’s group has indeed been captured by some of the island’s cutthroats headed up by the unhinged Vaas, and after a brief scene portraying a somewhat bitter-sweet escape, you’ll be nudged into the open-ended Rook Island to hunt down and rescue the rest of your group.

The slightly dark atmosphere surrounding the story is well put together overall, with steadily introduced character depth that’s also acted in a way that remains believable enough to draw you in. However, there is a few question marks regarding Jason’s quick acceptance of the amount of death he has to deal; he literally changes from scared, reluctant kid to flamethrower wielding loon within the first hour of gameplay. His loss of control does become a theme and the reasons why are clear enough, but it would have been nice to see a little more of a subtle progression in his attitude change through dialogue or cutscenes.

It’s fair to say there’s plenty of games that house decent narratives though, but whilst Far Cry 3’s plot keeps you well grounded and focused like some others, the excellent visuals and grandeur of its game world also manages to fervently push you out the door and set you free. From the lush jungle, winding roads and variable landscape, nothing ever looks dull or repetitive. Whilst traversing the island by foot or vehicle, you’ll find sharks roaming the waters, tigers stalking the jungles and patrols of gangs fighting each other by the roadsides; there’s a lot to enjoy on the island still, even if it’s not quite sipping rum by its beaches.

A good portion of the game relies on exploration of these surroundings too. Early on, with some help from new friends, you’ll be learning survival skills such as hunting and scavenging. Doing so regularly throughout your time on the island will mean better gear through upgrades. Examples include recipes that might ask for certain number of goat hides to craft an ammo pouch or allow you to carry more weapons, as well as creating medical items through collecting plant life – there’s a lot of work to be done before you’re allowed to start blowing things up and taking on inhabitant gangs as Jason becomes one with his survival instinct.

Your attachment to the protagonist is strengthened further with the XP and skill point system. It bonds well with the idea that he’s learning his way in the jungle (along with you), improving with every reluctant kill and maddening plot twist thrown at him. It’s worth putting some effort in for it too as there’s a good amount of nice gameplay touches available through the skill point tree, such as being able to throw a knife at a nearby enemy automatically after a takedown or better bow accuracy boosts. Progression is rife in Far Cry 3, so whether you’re following story missions or just seeing what the island has to offer, you’ll always feel like you have a targets and goals to pursue.

Like its predecessors, Far Cry 3’s enemies are no slouches. In fact they can be total taskmasters at times, particularly in missions that see them respawning until you’ve triggered something or completed a task. In some way the respawning detracts, but it does keep you on your toes and benefits the game ultimately by forcing you to think fast and try out a number of different approaches – something the series has become synonymous for.

One obvious approach is the superbly polished gunplay, but there’s also stealth mechanics that make you think a little more; should you disable the alarm first or take out the nearest patrol silently? Then again, you could always paraglide in, grenade a couple of buildings and then release any caged wildlife you can find so it resembles some kind of mad circus-like flame frenzy. You won’t be able to run-and-gun through the game – every mission you undertake usually requires some level of thought and a mixture of tactics, which feels more natural than just plugging away at a particular gameplay style. Thanks to the almost dynamic nature of the game, one mission I played even saw a tiger stroll in from nowhere and attack everything in sight, allowing me to happily skip away into the jungle and complete a tough mission.

Most of the game’s main storyline missions are nothing too surprising, though. The usual mixture of sniping from vantage points, vehicle set pieces, stalking targets without being seen are all present and correct and you’ll easily squeeze a good 10+ hours out of those alone. Venture away into the island and there’s even more extra gameplay to be found via mini-games, extra missions and time challenges. On top of that, collectables in the form of memory cards and worn letters depict the islands backstory, whilst old derelict signal towers reveal map segments similar to Assassin’s Creed – climb to the top and disable it and the area’s secrets are all revealed. All in all, Far Cry 3 is exceptional value in regards to content.

If that’s not enough there’s a decent co-op and multiplayer package waiting to be delved into as well. The co-op is a separate linear-styled campaign and can be played both offline or online. It doesn’t quite hit the same quality as the main game in narrative or gameplay due to thin characters and less choice, but with any four player co-op game that fact almost becomes inconsequential – you’ll make your own fun with friends.

The multiplayer portion also falls behind in appeal, even despite being enjoyable. It tries to conform to a generic online shooter model that includes leveling, unlocks and typical game mode templates. The shooting itself is as satisfying as the single-player, but you won’t find the teamplay of games like Battlefield or the frantic kill-pace of the Call of Duty series. There’s simply other games that do this style of multiplayer considerably better. What it does do, however, is bolster an already exceptional package with more good content – none of it’s wasted.

Far Cry 3, as a first person shooter, presents itself in a way that bucks modern trend. An expansive playground to explore, some hugely satisfying gunplay and a well polished subtextual story and character set, all together form a single player that is paramount to the package, as opposed to a mere afterthought. What makes it even better is that its co-op and multiplayer inclusions are also more than adequate, making Far Cry 3 not only one of the best all-round shooters you’ll have played for a while, but also a superlatively worthy sequel.