How to make a mammoth skin pouch in three easy steps….

Among our many annual certainties, you can always guarantee that Ubisoft will release some form of open world action game. With Assassins Creed skipping its usual annual release, 2016’s main franchised event (that we know of) is Far Cry Primal. Unlike 2013’s series spin off, Blood Dragon, Primal is a full price release rather than a budget title but, like that neon drenched diversion, it does many things to differentiate itself from its numbered brethren. In fact, it may well be one of the series most daring games yet. 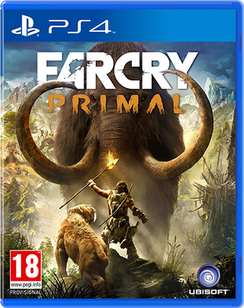 As per normal with Far Cry, Primal takes place in an open world full of all sorts of flora, fauna and a great big dollop of danger. But, unlike the modern day settings of Rook Island or Kyrat, the Mesolithic setting of Oros Valley feels almost alien. Gone are recognisable structures; villages, outposts and suchlike, replaced now by ramshackle settlements constructed by the Udam, Izila and Wenja tribes, the latter of which the player is a member of. From the moment you first step into the valley, it’s a beautiful place full of craggy gorges, flowing streams and dense forests. Explore to the north and you’ll discover snowy peaks where even the weather itself is hostile and, to the south, swampy wetlands. The story is typical Far Cry; following a disaster (in this case a hunt which ends badly) Takkar makes his way to Oros. The Wenja are a nomadic people who have been dispersed by the vicious Udam and Izila and, of course, it’s up to Takkar (and the player) to gather his lost people together and fight back against the marauders.

It’s this ancient setting that instigates the biggest changes by subverting many of the, shall we call them, UbiTropes. So, let’s see – towers to climb that reveal more of the map? Nope, they have been replaced by bonfires which can be lit (once surrounding enemies have been killed) and used as respawn and rest points. They still reveal a bit of the map, but not as much as the aforementioned towers (more on that later). Next – tech trees. Yes, there is a skill/XP system in place here but it’s not as straightforward as the previous games. Instead of one tree, Primal presents a number of smaller ones specific to certain Wenja tribes people who you can locate through the course of the story. Build them a home in your settlement and they’ll teach you about their specific line of expertise – hunting, crafting, combat etc. Where Jason Brody and Ajay Ghale magically learned new skills from the XP gods, Takkar has to make use of the knowledge of his people which lends a more satisfying edge to skill progression.

But what about an ever expanding arsenal? Yes, that’s here too – with a twist. The focus in Primal is on resource gathering and crafting – obviously cavemen weren’t shooting at each other with rifles, so weapons are limited to bows, clubs, spears and the like. These have a degree of durability but break and have to be re-crafted from resources gathered from the world. This focus means that it’s not as easy to pick a load out and roll with it. You’ll find yourself running out of arrows in the middle of a confrontation, having to resort to impromptu melee and finally panicking when you realise you’ve not been hoarding away enough hardwood from trees to recraft your weapons mid fight and promptly get your head caved in by a rather cross neanderthal. Add to that a complete lack of modern dialect – it’s strangely refreshing to play a game which relies on subtitles to tell its story.

Let’s talk about the map. I’ve seen some criticism levelled at the size of the map, specifically in correlation to Primal’s position as a full price game. Yes, the overall map is indeed considerably smaller than that of Far Cry 4 and, indeed, Far Cry 3, but there feels no less to do here. As you’ll mostly be traversing the terrain on foot the world feels much more densely packed together than before with less distance to travel to find something to do, be that a mission, side quest or even just a random hunt. If anything, the questing content feels a lot leaner than previous games and encounters are generally more random, meaning that the game map feels less of a tickbox exercise. The lack of any form of civilisation also ramps up the danger factor as most animals and people you encounter will react with severe hostility towards you.

Night time brings even more dangers – early on the game tempts you to stay out after dark with promises of rare animals to hunt and unique events, but the complete and total darkness that falls over the land is genuinely terrifying. You can set fire to one of your clubs and use it as a torch but, as you slowly watch it burn down, it only illuminates a small distance around you and the distant growls of unseen creatures lend an unsettling eeriness to the proceedings.

One big change up for the series is the ability to domesticate animals. Yes, that’s right – instead of shooting that wolf in the face with your bow and arrow, you can actually make him your bestie and let him rock around Oros with you, taking down bad guys and generally being a badass. This ability stretches to pretty much any predatory animal and, while the process of taming is little more than a “hold this button” mini game, the ability to send your furry murderchum off ahead of you evens the odds in the hostile world. Upgrade your affinity with animals and you can tame bigger ones and even ride them, making traversal somewhat quicker. It’s certainly not the first game to tackle animal companions in recent years but it is, for my money, the most satisfying. And look at the satisfaction on their face when you pet them after they’ve eviscerated an unsuspecting Udam!

Subversive and brisk, Far Cry Primal cuts a lot of the fat off what has been threatening to become a slightly predictable series. While it’s not utterly revolutionary, the setting allows the designers to be creative with how they present the usual tropes and the arresting visuals and densely populated map provide an engrossing experience. Plus you can tame and ride a sabertooth tiger – who wouldn’t want to do that?

Sounds pretty good, especially as the nearest thing to a much needed Turok reboot!

Right, hell with this, where’s my Turok reboot?!