FIFA 14 is strange one this year. There are no major changes or back of the box features, instead EA has chosen to tweak and refine last year’s effort in certain key areas. It’s a bold move, but one that’s ultimately paid off. 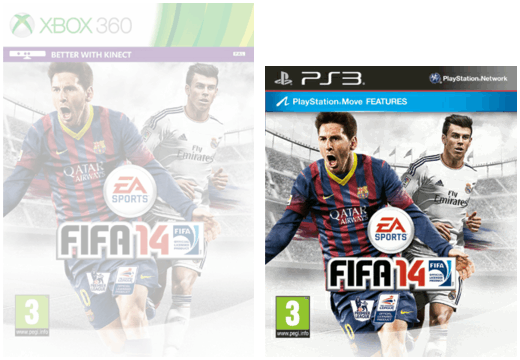 That’s not to say the game doesn’t have its issues. It has a fair few, both old and new. AI has improved ever so slightly, but still isn’t up to much apart from the odd attacking run here or there. Team styles are still not really present, which makes most matches feel a little too similar to the previous one. Taking on Madrid at the Bernabeu should feel totally different to when you play Stoke at the Britannia, but on most occasions FIFA 14 fails to replicate that. It’s a problem that stems from player individuality not being totally present too. The only way certain players stand out is through their pace or strength, which is great at a basic level, but move higher up and other traits should shine through as well. If you’re a Career Mode player then you’ll more than likely notice this negative the most.

Proper weight shift and momentum are two additions that fans have being crying out for a while now, and with FIFA 14 they both make the cut. The results are mostly positive, with players being unable to turn on a dime. It’s a move that shifts FIFA 14 into the “more realistic” territory, with attempts to turn instantly like you did in its predecessor usually resulting in you losing the ball. The pace of the game is impacted too, resulting in a more considered approach to build-up play. Combine that with the new ‘Protect the Ball’ feature and, if you’re good enough, you can pretty much dictate the pace of a match like Paul Scholes in his prime.

Don’t worry, Protect the Ball’s main use comes in handy too! Whether you’re sprinting or slowly moving forward just hold L2 or left trigger and the player you’re controlling will attempt to fend off any unwanted attention. It’s particularly useful when you’re in on goal and have a defender hot on your heels. Not always effective, but useful nonetheless. The only downside to these additions is that sometimes, mainly when playing against human player, you can get bogged down in tedious midfield battles. However, thankfully, these instances don’t blight the gameplay too much, but still worth mentioning.

Dribbling is where FIFA 14 is most improved though, it’s a real joy. Weight shift and momentum helps, but thanks to movement being more precise you now feel as if it’s possible to intricately dribble past opposition players. You won’t always be successful, sure, but the sheer fact that you can actually do this now is great. It’s in one-on-one situations where it really shines, creating a mini-tactical battle between you and the defender. Just like previous FIFA games, the quicker players still standout the most, but in this iteration the difference is a little less obvious due to weight shift and momentum being thrown into the mix.

Another key area where FIFA 14 thrives is with its shooting model, there’s so much variation now. Dipping, rising, curving, knuckle and off-balance shots are all possible during play. There’s a real sense of weight and power behind every shot you take, even when you hit one off target. There’s a certain joyous unpredictability about the shooting now too. Now that doesn’t mean shots are completely random, it just means that when you do happen to hit a sweet dipping shot into the top corner, you’ll more than likely scream the house the down! EA has tweaked the science behind the shots, and the results are extremely impressive.

The same can’t be said about that passing though. It’s not awful by any means, but it’s not great either. If you’re playing on full manual settings then it’s close to getting there, maybe even semi, but on assisted it’s a tad too predictable. Ground passing is okay, but long balls and through balls of any nature are skewed. Switching play with a long cross field pass doesn’t really feel as satisfying as it should. On the other hand, through balls (especially on assisted) are a bit too powerful. You can combat them to a certain degree if you’re good at defending, but if it’s a weak part of your game then you might end up struggling.

Presentation is usually a strong point, and for the most part that sentiment applies to FIFA 14, but certain aspects are beginning to look a bit dated. The new menus are great, with their clean and crisp look. It’s almost like EA worked closely with the team that designed Windows 8 or the new Xbox 360 dashboard. The new design is a godsend when it comes to Career Mode, allowing you to easily navigate from one screen to the next. Little touches like the game’s main menu recognising which mode you played last and displaying it on the home screen the next time you load up the game are also very much welcome. Then we have the in-game visuals, which are the polar opposite of the new menu system. It’s really surprising how dated and bland they look. Player likenesses and body types aren’t great either. Most players look like they’ve been too the gym a bit too much or taken steroids. Perhaps EA are saving all their visual power for next-gen, eh?

The package is undeniably brilliant though, there’s just so much to do and play. It’s almost in a league of its own when it comes to sports games. The ever popular Pro Clubs and Ultimate Team modes return, bigger and better than before. EA has listened to community feedback, improving Pro Clubs in several areas and adding a deeper chemistry system to Ultimate Team. Seasons mode (FSB’s favourite online mode) is still present and it’s as addictive as ever. This year you can share the Seasons joy as EA has introduced a co-op mode. It’s a fantastic addition to an already superb online portion of the game, and one that has the potential to be huge just like its single player counterpart.

Online is backed up by some fantastic offline content too, including improved Skill Games (dangerously addictive), Tournament, Be a Pro and an incredible Career Mode. The set-up is just so damn good, slick even. Career Mode is almost encroaching on Football Manager’s territory in terms of the levels of depth and just what you can do as a manager. The addition of the Global Scouting Network is an example of this, it’s so good. You can send out scouts to a specific country and ask them to find you players with certain traits or attributes. Once you’ve done that, they’ll come back to you with regular reports and detail their findings. The catch is that you won’t get spot on information like “here’s a young midfield player with 85 passing”. Scouts, depending on how good they are, will report back with data within a range and provide a recommendation, leaving you with the final decision on signing the player or not. If you’re not happy with the information you’ve been given or want more detail, you can instruct the scout to spend a bit more time on certain players. The depth is incredible, and it’s great to see EA pushing the mode and not resting on their laurels.

The changes to gameplay aren’t revolutionary or completely innovative, but with a solid base already in place, EA has tweaked the current-gen version in mostly all the right places. FIFA 14 plays a thoroughly enjoyable, solid game of football, delivering an incredible overall package, both offline and online. Yes, it’s not perfect, work definitely needs to be done on improving the game’s AI and passing, but EA has done the majority of hard work in this generation and set FIFA up very nicely for the next.