What’s that saying about buses?

With three Final Fantasy games coming out this year, it certainly feels like the franchise has hit the “like waiting for a bus” nail on the head. This was my first experience with Final Fantasy on a handheld device, playing it on my Nintendo 2DS, and was intrigued to see how well the epic series holds up on a handheld! 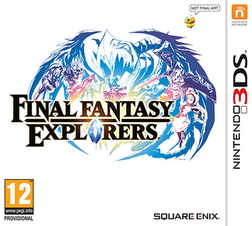 I think the first thing that stood out for me was how Final Fantasy Explorers isn’t as story focused as many other games in the series are, although there still is a back-story to flesh out the experience.  The narrative is set in the world of Amostra, where a large crystal has crashed into sea, with monsters and Eidolons (Aeons, Summons if you like) appearing with the crystal. As an explorer, your job is to get the crystal back to the people of Amostra, as it acts as their main power source.

Obviously, the aim is to get from the start through to the finish of the game, but Final Fantasy Explorers branches out much more than you’d expect, and at times felt a bit more like an MMO, based on how the gameplay and story pans out. The main throughline of the story isn’t the strongest or most gripping, but it does its job well.

Before I get on to the gameplay, I have to comment on the visuals and sound that Final Fantasy Explorers offers. As always, if you are a Final Fantasy fanatic, you will quickly feel at home with the look and especially the sound that is on offer here. Right from the iconic battle victory theme, down to the general Final Fantasy style, Square Enix have kept to their roots with the look and sound of Explorers. I actually appreciated the visuals more than I thought I would on the 2DS which was a nice surprise. Cid, Moogle, Chocobos… Final Fantasy Explorers uses the series past and present more than you would think.

In terms of a cast, Final Fantasy Explorers certainly uses the back catalog of Final Fantasy characters very well, especially with one of the abilities you can learn in battle.  This ability, with the use of magicyte allows you to transform yourself into one of several favourites from the series’ past. These include legends such as Squall and Tidus, as well as the more recent Lightning from Final Fantasy XIII. It is great, whilst also very nostalgic to become these iconic characters once again. What is also great is that the Eidolons you face throughout the game are ones from the past including the likes of Ifrit, Behamut and Shiva. There are two new Eidolons added in the game, but for me, I thoroughly enjoyed revisiting old memories throughout my time with the game.

However, Final Fantasy Explorers was all about creating new memories for myself, and the system it used certainly was one I thoroughly enjoyed. As mentioned above, the game feels like an MMO in places, mainly down to the quest design. There are a few tutorial quests that are thrown in at the start in order to get an understanding of the controls in the game, but even after I completed them, I still had one gripe, which was the Camera. The camera doesn’t flow naturally, you have to press the directional buttons in the way you want the camera to move. You can press the L shoulder button to instantly get the camera into place but it would have been so much better if the camera was to pan automatically.

There is no leveling up system in Final Fantasy Explorers for your main character, instead it is all about upgrading your strength and defense through purchasing new weapons and using items which are dropped by monsters and Eidolons in order to upgrade your weapons and armour you have equipped to boost your stats. You also have the ability to call on the monsters you have defeated before to help you in your quests against Eidolons (which can take absolutely ages to complete!).

I must say, I do like the battle system that is apparent in Final Fantasy Explorers. As well as having your standard attacks, you can have up to 8 different attacks mapped to the L and R shoulder buttons. The use of these attacks will then fill up a special resonance bar, which in turn will let you have the ability to use a ‘Crystal Surge’. These are very useful, especially on the harder quests, and can increase your stats for a limited time, until that Surge ability has ended.