The majority of modern racing games inveriably lean towards one of two gaming archetypes, arcade or simulation. With their Forza series, that typically resided with the latter of the two, Microsoft has decided to take the succesful track racer brand, enlist a bunch of seasoned racer developers from Playground Games and dangerously thrust it into open-world racer territory – and you’ll be very glad they did. 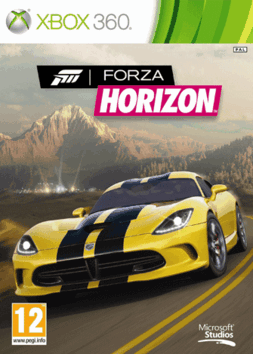 Colorado state is home to the fictional Horizon Festival, a gathering of car enthusiasts and music intertwined with jaw-dropping scenery and competition a-plenty. Forza Horizon generates more of an over riding atmosphere than a story as such, but the main premise revolves around your initiation into the festival that sees you endeavour to out race, out skill and out smart your opponents to the top of the title of festival champion.

You’ll find a fair amount of cut scenes to break up the driving as you progress, plus an interesting amount of characters that are all well acted, albeit slightly stereotypical and at times a little trite. It’s the superb festival atmosphere that Horizon generates throughout that really shines though; you’ll never feel lonely out on the open roads, especially with the regular radio updates that intertwine with the latest news of rivals and upcoming races.

It will most likely surprise few people who’ve ever played any of the Forza titles, but graphically, Horizon is an absolute joy to behold. Whilst the map isn’t of gigantic proportions, driving from one side to the other is genuinely satisfying by itself; snow laden peaks, sprawling sun-kissed canyons and green rural areas all somehow roll into one another in stunning fashion. The festival atmosphere is once again highlighted too, as day dynamically fades into night revealing euphoric laser shows and fireworks in the distance.

It’s true that after a few hours, you would have already have witnessed most of the Colorado map and what it has to offer, but there’s no doubt it’s still a particularly pretty place to traverse, even after the tenth time of driving down the same beaten routes. Needless to say, the car models are excellently detailed too but any damage you receive is sadly only superficial, perhaps to accommodate the adjustments made to open-ended gameplay. The amount of licensed vehicles isn’t a particularly huge list either, so although the big hitting companies are all there for the most part, just don’t expect each to offer a grand selection to choose from.

There’s nothing that quite stimulates the feeling of glee than a fully growling engine cranked up through your speakers. Forza Horizon continues the exceptional work from other Forza titles with strong audio throughout, plus it has the added benefits of changes in local that have all been treated well for the sake of immersion.

As previously mentioned, the radio updates appear regularly but inbetween you’ll have your choice of music stations, each offering different genres to choose from. It has to be said, with a great soundtrack, solid voice and sound effect work, there’s really very few negatives to say about Horizon in the audio department, it’s superbly implemented all round.

Where it counts, the driving itself, Forza Horizon is amongst the most satisfying experiences you’ll find. Default settings do feel tapered in from a simulation standpoint (perhaps to avoid frustration for a more casual gamer), but a quick visit to the settings and it’ll be pretty close to Forza 4 regarding the way it deals with physics and handling. Whichever settings you choose though, making the journey between events as equally interesting and enjoyable as the events themselves, plus there’s extra incentive in the event winnings if you increase the challenge, so you may want to regardless.

In fact the journey between events forms another gameplay element entirely towards your endeavours; wherever you’re going or whatever vehicle you’re doing it in you’ll collect popularity points with skilful and exciting driving manoeuvres – near misses, high speed runs and drifting to name a few. By collecting these points you’ll eventually gain access to special PR events that pit you against planes and hot air balloons and reward you with new cars to add to your garage as well as adding some novelty.

However, despite all the distractions, including billboards to collect and hidden barns containing free cars, the main game progression is presented in the form of wristbands. Each coloured wristband is given to you after completing certain events all over the map and in turn allows you to compete in better events as a result. It’s a relief to see you’re not ushered down a particular path too stringently. Events don’t have to be completed or even won because finishing second or third and choosing a few different events is usually enough to grab your next band. There’s no faux-freedom in Forza Horizon, and it’s all the better for it.

All the tweaking and upgrading is present and correct for car enthusiasts to delve into as well. In the center of the map is Horizon Festival’s HQ where you’ll be able to visit garages and markets to spend credits won from competing. Sadly, there’s no in-depth tuning of individual parts, which will most likely disappoint some if not all, but there’s definately enough to keep you busy regardless. Customising designs at the paint shop is also a nice time burner and allows your designs to be uploaded and sold to other players online for an extra credits.

Perhaps one of the weaker elements to the game is the multiplayer inclusion. During single player there’s some lead boards to match your times against, plus after events you’ll be offered a rival challenge in which you race against another players best time. Forza Horizon does have some full eight player online to go with the ghost races though – mainly racing but also some interesting diversions such as tag, which are fun for the most part but despite offering some nice rewards while leveling up, doesn’t stand up nearly as well as the single player does.

With the online, the variety of single player collectables and the hidden barns, there’s a good amount of content to wade through – no doubt all to be blustered with DLC in the future. It’s also worth mentioning the exquisite photo mode that can become a game in itself. Snapping your cars in the stunning locations, adding effects and camera filters is good fun and will totally appeal to car lovers.

Forza Horizon as a spin-off could have been slated as an unnecessary risk for the consistently well-received series that Forza has become. Playground Games, however, have taken the open-world racing genre and kicked it up several notches with their effort, whilst retaining a lot of what makes the Forza brand appealing in the first place. So for fans of fast cars, winding open roads and euphoric festival atmospheres, look no further, as Forza Horizon leaves others in its dust.