It’s the usual scenario; a launch game for a new console, released with content missing or cut out. That’s what happened with Forza Motorsport 5. Released alongside the Xbox One, the game received praise for its gameplay, but was rightly criticise for its lack of content. Fast forward to the present day, almost two years after the release of Forza 5, Turn 10 Studios are back with Forza Motorsport 6. All the pre-release footage and information suggests something special could be on the cards, but is that just a smoke screen or does Forza 6 top the podium? Well, it’s the latter and more. 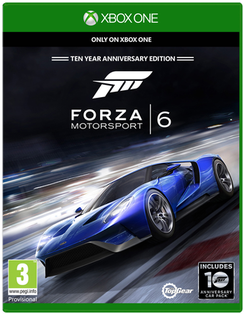 From the moment you load up Forza Motorsport 6, it’s clear that there’s something special about the game. There’s a certain slickness about everything, from the loading screens to the menu. Sure, it’s an aspect of previous Forza games that’s shone too, but Turn 10 has really gone the extra mile here. Your chosen vehicle will sit there glistening in your chosen homespace, with every single detail clearly visibly, and that’s even before you reach the slickly designed menus. You can tell bit of this game was designed and created by people who have a passion for motorsport. More than that, they want you to join them and share their enthusiasm for it. I’m not a petrol head myself, but a few moments in the menus of Forza Motorsport 6 and my interest was certainly heightened. You see, each part of the game you go into for the first time, you’re given an overview of it. A slick (there’s that word again) voice guides you, explains to you, almost every facet of the game. From the simple options to more advanced stuff like tuning, it’s all present and explained very well. If there was any doubt what this game is about, that is put to bed immediately. Cars. Racing. Motorsport. Oh and it’s damn good at all them.

The limited content aside, Forza Motorsport 5 delivered a very good experience when you got on the track. It’s great news then that Forza Motorsport 6 takes that solid gameplay and improves on it. No matter what assist settings you use or Drivatar difficulty (more on these later) you play on, the game handles like a dream. Each car, depending on manufacturer, power and weight handles noticeably differently to the next one. It’s something you feel as well. You literally feel the car moving on the tarmac below. Every shunt, bump and slide is felt, in no part thanks to the way the game uses the vibration in the Xbox One pad’s triggers. Turn 10 has used the feature wonderfully, adding to overall race experience. It will never match up to using a good steering wheel, sure, but that shouldn’t take anything away from its implementation. As I mentioned briefly, all of this applies no matter which assists you have turned on or off. All the usual options are present (traction control, stability etc), but doing the latter will just heighten the experience, making each race a battle of attrition. Immense concentration required, that should go without saying. Then you have the cherry on the gameplay cake, my favourite part of Forza Motorsport 6. Yes, the Drivatars. Similar to what was introduced in Forza Motorsport 5, the Drivatar technology is even more impressive than before. Turn 10 and Microsoft were right, it really is AI that learns from the way you and other humans drive. The data taken from the Xbox Cloud is constantly learning and evolving; resulting in the AI you race against doing so in a very realistic way. Drivers will be aggressive (you can turn this setting off if you want), shunt you and even make mistakes. It’s a complete joy to witness and be part of, a far cry from the robotic nature of AI in pretty much all other racing games. Just imagine it, you and 23 cars with fantastic AI. It’s so much fun, making each race dynamic and unique.

It’s good news then (unlike a couple of years ago) that Forza Motorsport 6 has plenty of content for your epic races to play out. Career mode is at the heart of it all, offering up lots for you to get stuck into. Broken down into five distinct volumes, you’ll go from Super Street to Ultimate Motorsport stuff when you eventually finish up. Each volume consists of different series, offering up an increasing number of races as you move forward. It’s an interesting set up, but one that works as you’re taken around the world and given control of some amazing cars. The latter is an aspect you have good control of too, so if you wish to kick off with a speedy sports car in the first volume then that is totally up to you. It’s all down to how confident you feel. The choice is (more or less) completely yours. However you chose to tackle it, you’ll earn XP that covers you as a driver and your affinity with a certain manufacturer. You’ll level up and earn corresponding rewards, such as prize spins that will gift you a brand new car or credits to buy in-game stuff. Oh and by stuff, I don’t mean just cars.

You see, Forza Motorsport 6 introduces ‘Mods’ to the mix. I’m not talking modifications in terms of tuning your car, no. I’m talking about modifiers that you can apply before a race. You buy them in packs using in-game credits, and each one has a different effect on your car. Some will dare you to add more weight to your car in return for a percentage of more credits whereas others will give you more power or grip. The latter might seem game breaking, but far from it. These cards usually add around 6% to 9% extra grip and/or power. Plus, some are track specific too, meaning you won’t get the best out of them unless you’re on that circuit. I used the dare ones mostly as they introduced an increased element of challenge, encouraging me to play in a different way or adjust my style slightly. Either way, if you don’t like the sound of them, you don’t have to use them. They’re not compulsory. It’s nice way of helping newcomers to ease into the game, career mode specifically. Call me controversial, but I’m a fan.

Wait, there’s more from the Career part of Forza Motorsport 6. As if the Volumes weren’t enough, the mode also houses something called Showcases. Here you’re taken on a motorsport journey, one that tasks you with doing all sorts. One moment you’ll be put behind the wheel of an Indy Car and the next you’ll be going one-on-one against the Stig on the Top Gear test track. You’re introduced to elements of motorsport that the Career mode couldn’t cover without breaking the balance and pacing of the game. The Showcase events are good for taking a break from the hustle and bustle of career mode, with no real pressure on your shoulders. You can let go a bit and see what it feels like to drive around an Indy Car track at amazing speeds. Wait, I can tell you. I felt like my eye were going to bleed, yet I thoroughly enjoyed it. There are plenty of these events to take on too, with ten categories broken down into several challenges or races.

That’s a sentiment that applies to the rest of the game, there is so much content to get stuck into. As you’d expect, there’s an online element and it’s pretty damn good. Mutiplayer mode consists of your standard lobby based stuff, with up to 24 players allowed. It’s mayhem. Fun, sure, but still mayhem. If you’re like me and prefer to keep it clean, then it’s all about finding a good group of people and getting some proper racing done.  You can, of course, do that by setting up private lobbies and staying away from “dirty” randoms. League mode is the second part of Forza Motorsport 6’s online component. Similar to FIFA’s seasons mode, here you start off in an introductory league with the aim to work your way up to the top. An interesting idea and something I’ll be playing a lot more of once there are more people online. Lobbies in this mode will open and close on certain dates, so it’s about getting in there on time and making your mark. Rounding things off is the Rivals mode, essentially a leaderboard where you can post your best times or scores and show off to the world. Sadly, I’m not that good, but I’m sure you will be.

Elsewhere (yes, there’s more), you have the return of the Marketplace, Forza TV, custom designs and the oddly compelling Forzavista. I’m not ashamed to admit that I checked out a few of my new purchases up close and personally many times using this feature. I’m not even a petrol head. Is that weird? Anyway, just in case you’re a numbers person, Forza Motorsport 6 has over 450 cars and 25 tracks you can race them on. Considering last year’s “mishap” in terms of content, this is huge improvement. Consider your apology well and truly accepted, Turn 10 Studios. Seriously, I’ve put over 20 hours into the game and there are still many races to go, so rest assured there is plenty of content present.

There is one slight fault with the game though. Loading times, they’re a bit on the long side, ranging from anything between 20 and 35 seconds. However, given the beauty that loads up following that wait, you can almost forgive the wait. It’s no exaggeration when I say Forza Motorsport 6 is a looker and a half. Each car, both inside and out, is painstakingly recreated to resemble its real life counterpart. The detail is immense, so much so it hurts when you crash and damage your car. Yes, a proper damage model is still present in Forza, with you choosing it’s merely cosmetic or full on simulation. The latter is brutal, I warn you now! Then you have the rain, introduced for the first time in Forza game. Man, it’s stunning, especially when you take into account the game runs at a buttery smooth 1080p and 60fps. Water will realistically lash down on your windshield, obstructing your view momentarily until it’s wiped away for a brief moment. You’ll also see puddles form on tracks, making keeping control of your car that touch more difficult. Mud will also form in grassy parts of the track. It’s a thing of beauty, it really is. Given the fact you’ve got 24 cars on the track and no hitch in the performance, it’s up there with DriveClub for me in that respect. A truly stunning looking game.

From the menus to the racing, everything about Forza Motorsport 6 screams quality. Never since the days of Gran Turismo 2 or 3 have I been hooked by a racing game like this. It’s so damn slick. Whether you’re a racing aficionado or have a passing interest, it’s craftsmanship has to be applauded. Hell, the Drivatar technology alone deserves a huge amount of praise. That combined with the depth of content and immersive handling model will keep you coming back for more. There’s no better racing game out there. This is the benchmark now. If you own an Xbox One, Forza Motorsport 6 is an essential purchase.