Microsoft’s favorite post apocalyptic world makes a comeback after concluding its trilogy, but this time in different hands. People Can Fly has been given a chance to dabble in one of Epic Games’ bigger franchises, but did they make a lasting impression? Only time will tell. 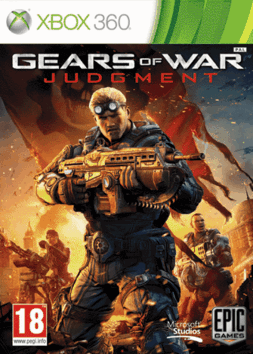 Let’s get straight to the point – Story is not Gears of War’s strong point. As such, the idea of reviewing the story for a Gears of War title frankly seemed like a redundant idea, but inevitably there will be some poor soul that is actually heavily invested in the narrative for these titles. That being the case here is the general gist of Gears of War: Judgment’s story.

Gears of War mainstay, Baird in all of his infinite wisdom and tech wizardry has committed a war crime and is about to be tried for his “atrocious”, but no doubt heroic offenses against humanity. Naturally, if the world is to be saved, a rebellious squad of gun totting adrenaline junkies must do it. What follows is a series of flashbacks explaining exactly what he and ‘Kilo’ squad actually did to offend the macho COG gods. As you can imagine, not the most awe-inspiring tale of woe, but it gets the job done.

It’s been six years and some change since the original Gears of War burst onto our screens with chainsaw in hand and impressed me with its stunning graphics – Epic must have been pretty proud of their engine. Unfortunately Judgment understandably can’t convey the same emotions on 7-year-old hardware, It does however take advantage of the steady improvements that were made over the course of the trilogy and is still pretty to look at on a technical level.

From a design point of view there has been more freedom afforded by the time frame the game is set in. lending more diversity to proceedings as you move from sprawling city backdrops to mansions and the usual derelict labs.

Sound design is business as usual for a Gears of War title. Lots of disgruntled Locust grunts will let you know when an enemy is breathing down your neck. The deep seductively dark strings set the mood and an array of cheesy dialogue will make any veteran feel at home.

Gears of War: Judgment is the second Microsoft Studios franchise to find its way into the hands of a new developer, and People Can Fly have wasted no time in stamping their mark on the latest Gears title.

Let’s take the campaign for example. It still retains its chapter format, but this time it seems there has been more emphasis placed on breaking these up into more distinct “levels”. “Why” you ask? So you can be rated of course. Each section of the campaign, or level for want of a better word will now rate you out of three stars. Every headshot, every execution and every explosion will now go towards this rating. You may be thinking this design seems a bit familiar and it should now be dawning on you, what People Can Fly’s previous game actually was. Yes, Bulletstorm. From where I’m sitting (on top of a pile of bloody Locust Grubs) this feels like an attempt to add some longevity to the campaign in the form of “Challenges”. You only need to look at the achievements, which encourage you to get a certain amount of stars for each difficulty level to realize this. In case you were wondering, yes the campaign is quite short, but back on point, veterans are probably not going to be pleased with the change. It’s very hard to shake of the feeling that you are playing an arcade game, but that’s not to say the campaign is not fun.

The next change is actually tied into the way the story is told to you as a player. Each member of ‘Kilo’ squad gets a chance to tell their part of the story giving them a chapter each where you get to fill their blood soaked boots. Scattered around the levels are ‘declassified’ missions in the form of glowing red skulls that are meant to bring to light certain classified information for the story. In actuality these have no effect on the story at all, but add an extra challenge to the section you are on and enable you to earn stars faster. My main problem with these is the lack of diversity. While most of these side objectives are fun to do first time round. There is only so many times I can put up with escorting an NPC, defending an area from three waves of enemies, Horde mode style or getting from A to B within a time limit.

On the flip side, the new weapons added to your arsenal are fun as hell to get to grips with, and are definitely a welcome addition to the current batch. There is just something so sadistically fun about spraying an area with bounce happy grenades or charging into battle with a makeshift sniper without a scope. It’s good to see People Can Fly’s imagination in full force here.

Once you are done with the campaign and have earned enough stars, Judgement has a little reward for you in the form of ‘Aftermath’. This mini-campaign sees you jump ahead into the future (sometime during Gears 3) to revisit the lands you have just saved. Funnily enough, this relatively short section of the game feels more like traditional Gears of War then the whole of the original sectioned off story mode. It’s a shame really, as they could have maintained the epic feeling of the franchise if they had stuck with the traditional formulae throughout.

However, lets not kid ourselves, multiplayer has always been the main attraction for Gears of War lovers and it’s largely the same affair (you may now breath a sigh of relief). The larger maps and new weapons do somewhat move away from the shotgun happy fun of the original, but People Can Fly have done a decent job of balancing the competitive side while adding a few new modes. Free-for all is among them and is made possible with the larger maps. Still, I can’t help but feel this is a weird addition to a Gears game, a franchise known largely for it’s team based play.

The other new mode is ‘Overun’ a Horde style competitive mode where players take turns defending objectives for a specific amount of time. Respawns are infinite during this time, but more importantly four predefined classes have been added. Your typical archetypes are applicable here. You can be a engineer equipped with turrets, soldier plonk down ammo boxes for comrades, while healers, well, heal! And you know what, I can’t pretend it’s not fun.

Classes have also infiltrated the re-imagined Horde mode too, adding a little more dimension to proceedings and earning it the new name, ‘Survival’. A small change, yes, but with every game under the sun now sporting a horde mode it is nice to see some deviation. New weapons like the Trip Wire Crossbow (creates a laser trip wire that triggers a missile to fire at any who cross it’s path )and Stim Grenade make it easier to defend territory and heal comrades respectively.

As previously mentioned, the core campaign for Gears of War: Judgment is a short experience. It runs somewhere between 5-7 hours depending on whether you feel the urge to ‘declassify’ each mission. Should you find yourself on an achievement or unlock-a-thon you can probably double that number. Judgment likes to hand out RPG- like awards for completing (read: killing) certain enemies in the form of skins and character unlocks. Couple this with the extensive multiplayer and you are bound to find countless hours of fun should you dedicate yourself to the Coalitions cause.

So the question is, should you buy Gears of War: Judgment? The answer to the question of course depends on whether you can stomach the new changes. What we have here is a slightly different beast that still enjoys kicking ass and taking numbers. Something it still does very well on a multiplayer level, but not so much on a campaign one.