Reviewing something like Goat Simulator is a difficult prospect – especially this re-release which has come around two years after the title was first set loose to run amok through the gaming landscape. It quickly gained notoriety and cult status, largely for its ridiculous premise alone. However, after spending an extended period of time with Goat Simulator, you soon realise that the idea of a game where you control a goat is nowhere near close to being the most surreal part of this package. Add to the mix that the development team at Coffee Stain Studios freely admit that their simulator is a “broken and stupid game”, we really are in for a gaming experience like no other. 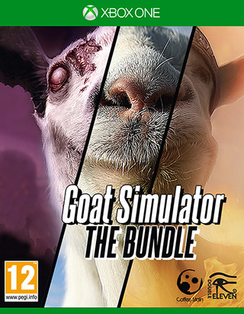 The premise couldn’t be simpler – you take control of a female goat, and you are tasked with exploring an open-world and causing as much chaos as you possibly can. There are no levels or missions to complete, with only a loose list of objectives that you can try to complete if you so wish – including such tasks as flying through the air for extended lengths of time, performing forward and backward flips, or even getting your farmyard friend to ride a bicycle. None of this makes any sense taken out of context – and it doesn’t really make any more sense when you are actually playing through it yourself. The best way to describe it would be to say it is Tony Hawk’s Pro Skateboarding, just with a goat!

But it is in the abstract gameplay where the main enjoyment of Goat Simulator can be found – experimenting with the mechanics and exploring the various maps. You can jump, run and ride anywhere, discovering new areas and scenarios where you can ragdoll your goat and blitz through everything in your path. The more destruction you cause, the more points you garner. You can even start using your disgustingly long tongue to lick objects or people, harpooning them and dragging them around the map like a wrecking ball. If this still sounds like a confusing mess, then you are along the right lines.

It isn’t to be taken seriously and is riddled with glitches – but that allows you to try your best to break the program at every turn. Sometimes you will need to respawn once you become stuck – but that almost feels like an achievement in its own right. This is all before you even begin to switch on the modifiers – such as one that straps a jetpack to the back of your critter, it the tall goat (read Giraffe) – which brings a whole new scale to proceedings. Each new modifier just ratchets up the madness levels and provides new ways to traverse and pervert your game world. The aspect of trying anything just to see what happens is further encouraged by the incentive list of Xbox Achievements – pushing the player to discover all of the secrets and Easter Eggs that are hidden away within.

The Xbox bundle includes a predictably hectic split screen multiplayer mode for up to four goats, along with Xbox Live leaderboards to challenge your friends on. But the real point of the bundle is to include the two major DLC expansions – Mmore Goats and GoatZ. More Goats is an MMO/Skyrim homage, that very loosely gives you RPG-lite quests to complete and the opportunity to level up your goat. The levelling up amounts to nothing more than a number in the corner of the screen – aside from a few special powers which generally have no practical use. All of the actual missions are simple fetch quests, or go from A to B – and whilst the add-on does evoke the general atmosphere of the games it looks to parody, sadly it fails to inspire the imagination on the whole.

The other add-on, GoatZ gives your goat the chance to either survive a zombie outbreak, or to spread it yourself. Use your Baaa to infect the populace, or use the basic in-game crafting system to create weapons to wipe them out. Being a DayZ parody, survival is the key element in either mode – with health and hunger meters to take into consideration as you try to survive for as many days as you can. Similarly to Mmore Goats, despite offering new maps to explore and slightly more structured gameplay than the original game, GoatZ soon becomes repetitive and manages only to dilute the initial charm of the core experience.

We haven’t even touched upon the horribly compressed speech, maddeningly looped music tracks or the low-res textures that populate the glitch-ridden visuals – but by now you can probably tell that Goat Simulator was never trying to be a great technical achievement. Someone simply came up with a premise that they thought could be fun, and somehow stretched it out into a full game – and it definitely does work.

There is an inexplicable, hypnotic charm to Goat Simulator, where you find yourself bouncing around the screen; head-butting cars and licking pedestrians, just to see what else is possible. It is incredibly easy to control, and anyone can be up and running in a matter of seconds, creating havoc. This isn’t a title that will occupy you for an extended period of time, repetition sets in quickly and there is very little challenge on offer. The DLC packs actually detract from the simple charm, as this is the equivalent of the iPhone game for home consoles. Pick up and play for fifteen minutes, then quickly forget what you were even doing. An often hilarious distraction, but unfortunately never much more than that.