Kratos is back. Again. This time in glorious 1080p and 60 fps. Oh and glorious really is the word… 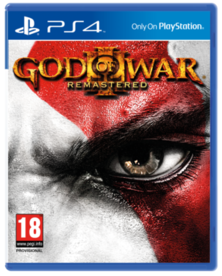 Many are against remastered versions of games and would rather have backwards compatibility, but from a personal standpoint, I was elated when God of War 3 Remastered was announced. God of War is my favourite franchise in gaming and God of War 3 my favourite game ever. While some may not agree that it’s one of Sony’s best ever games, it holds a special place in my gaming heart. Sorry, I had to get that out of the way.

God of War 3 picks up where the previous games left off, even if it doesn’t quite do a great job of recapping the past two games. On that basis alone, if you haven’t played the God of War series, I’d recommend playing at least the second game before moving onto the third. It’s a game that plays strongly on its history, so without that you lose a lot of context and it’s simply not the same.

In fact, while some might not agree, the story is the best part of the game for me. Kratos, after his last big battle with Zeus, is back to take down Olympus. Only this time he has help from the Titans. Mainly Gaia, but help nonetheless. Sony Santa Monica has done a sensational job in taking the tales of Greek mythology and transitioning them across into the God of War universe. The character design, the voice acting and dialogue are all superb.  Many of the characters are voiced by some of the finest actors in the world, such as Malcolm McDowell and Rip Torn. That said, Kratos is undeniably the star of the show. With two previous outings under his belt, his character is as deep, cold and menacing as ever. He cares purely about destroying the Gods that he feels abandoned him and will stop at nothing for his chance of revenge. However, he soon comes across an individual that changes his perspective on his own journey. I won’t say more. Promise.

The combat mechanics remain as they were with the original release, no tweaks were made and (in all honesty) none were needed. It’s still that fast paced hack and slash combat, with square for quick strikes, triangle for heavy attacks and circle for grappling. Combine them all and you can perform some devastating (great looking) attacks; a trademark of the God of War series. Throw in secondary weapons as well as magic and you can take out enemies in some truly brutal ways. I’ll let you find out all about them on your own! All I’ll say is you’re in for a treat. Of course, you can upgrade and unlock new abilities, moves and weapons thanks to magic that you collect as you move through the game.

Tying into the combat and arguably the strongest aspect of the game are the boss battles. Each God you come across has its own unique set of abilities and far from easy to defeat. I won’t specify which one favoured, but you are quickly thrust into your first boss battle after you start the game. It is trial by fire to say the least, so if you haven’t played the game for a while be prepared to find it tough to begin with. Also, personal tip, be sure to search the areas after each battle to find hidden gems that will help you if you want to replay the game. It’s okay, you can thank me later.

If you’re a God of War fan, then you’ll know that it’s far from a simple action game. On the other hand, if you’re not, you’ll find out very quickly that it’s much more. Kratos is not only tested physically, his brain is given a workout too. There are no end to the puzzles that he must solve in order to progress further into his quest. The series is known for some good puzzles, but God of War 3 produced some of the very best I’ve encountered in any game. An amazing example is a section of the game where a jewel acquired from Hera can distort the perspective of the game, cleverly allowing you to build new paths and get through a maze. On this playthrough I got through it very quickly as I remembered exactly what to do when I played it previously. However, the first time I played the game I spent hours trying to solve it. When I did, I remember being in awe of the creativity. That’s just want example as well, there are many more littered throughout the rest of the game.

Being a remaster, I should probably tell you that God of War 3 looks stunning. Sure, the game looked amazing on the PS3, but this PS4 version has given it that extra bit of polish. Textures are more detailed and shadows look better, but more than that the game looks sharper and runs so smoothly. If you compare it directly to the PS3 version, there is a clear difference.

One slight negative, to add to the exclusion of any substantial recap, is the lack of replayability. Sure you can replay it to get all the trophies and there is a challenge mode, but once you’re done with the story… You’re pretty much done with the game. It’s a minor criticism, and I guess a game like God of War is not meant for repeat playthroughs, but I thought it was worth a mention nonetheless. There is a photo mode though, so if you want to take some moody shots of Kratos you can most certainly do that.

Originally released in 2010, God of War 3 remains a stunning game. God of War 3 Remastered is the same game, but with an extra level of polish. It could almost pass for a PS4 game. Almost. Yes, it doesn’t recap the events of previous games well and it’s not the most replayable game, but it’s still great. I loved every moment of reliving Kratos’ epic adventure for a second time. Now let’s hold hands and pray Sony delivers a new God of War game soon, so we can do this all over again.

I love this game, i thinK Santa Mónica do a GREAT JOB for this reamaster version

Wow!!This games is so cool!! I love it so much!!and the most perfect is that my GPD XD could run it so smoothly!!