It has been just over three years since Kratos was last seen in our Playstation 3’s. The Ghost of Sparta is back in God of War: Ascension, a prequel to the original trilogy. However, does Ascension compliment the God of War series, or is it an unnecessary addition? Read on to find out. 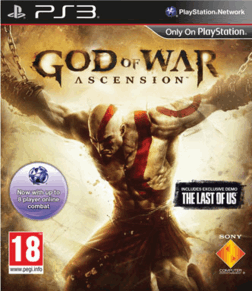 God of War: Ascension tells the story of how Kratos escaped the blood oath he made to the then God of War, Ares. The game starts with you actually trapped by the Furies, the guardians of what they deem to be right, punishing those who deserve judgement, before going back to an earlier time when you are approached by Orkos, the love child of the Furies and Ares, to find the Oracle and break free from the chains of the God of War. As we know from the original, Kratos made said blood oath in an attempt to lead the army at the disposal of Ares and defeat all his present, and future, enemies. This however led him to do terrible things, acts so vile that Ares has put a shadow over them, forcing Kratos to forget. However the Spartan, wanting to know the truth, set out to destroy the Furies, one by one until you destroy your blood oath to Ares, leading beautifully on to the first God of War game.

However, there is a feeling of epicness missing from the story. In the past we’ve had insane battles with the gods of Olympus and the Titans Gaia and Kronos, but this time around we are stuck with the Furies Megaera, Tisiphone, and the Fury Queen, Alecto. While they are formidable foes, they clearly don’t reach the heights of previous bosses. Obviously they couldn’t use any of the previous bosses as in this game they are all still to come, but unfortunately it just doesn’t match up to the past games.

As usual Sony Santa Monica Studios have brought greek mythologies favourite characters (as well as some originals) to life in the most stunning way possible. The God of War series has always had stunning graphics and Ascension is no different. Particular focus must be paid to the backdrops of certain levels. However this can sometimes work against the gameplay, Kratos can be so far from your eye line in some levels that you can’t actually see him and you lose focus of where you are and who you may be attacking.  This is all done so that you can appreciate the beautiful visuals, which really are incredible, but your position on the screen is not something you want to give up to look at pretty backdrops. The visuals are so good though that the difference between cutscenes and gameplay is barely noticeable. Combat scars on enemies appear natural, and occur as the strikes are landed perfectly which is a very nice touch as all too often in combat games you just see blood spurt and no scars.

The audio is what you would expect from a God of War title, menacing music, the sound of metal hitting flesh, the dark tones of Kratos. No complaints can be made about the sound as it has been truly nailed. The soundtrack, as always, is spot on, feeding the atmosphere continuously through the game.

The traditional God of War style has been retained, albeit with a few small changes. Don’t worry though, it still feels just as smooth, brutal and exciting to play. The real core changes to the gameplay, at least when it comes to the controls, is that grappling is now controlled by R1 rather than O, the latter being used for melee attacks and new disposable weapon attacks. These disposable weapons mainly consist of swords, spears etc, giving a bit more variety of attack through out the game. The game has always won plaudits for it’s simple, yet technical combat system, and this year the feel is the same, so fans of the series can rest assured that any of the changes have only added to the overall experience.

One of the bigger combat changes in this iteration is the inclusion of what can only be described as cinematic attacks. This is actually the first combat sequence you encounter in the game, as you try to break free the shackles that the Fury Megaera has placed upon you. You attack using the Square and Triangle button until you see an attack come your way, at this point you have to dodge their counter to continue the sequence until it ends. This style of combat is featured across the entire game with general enemies as well as bosses. On first play you may not realise you are even meant to be attacking until you are stood still looking a bit sheepish, but once you realise it and get used to the style of play, you’ll realise it is an essential part of what set’s Ascension apart from the original games. It is a welcome addition to the fighting system and adds a lot to the cinematic effect of the story.

God of War III saw Kratos carry several different weapons, however this time around he get’s his hands on the elements. You start off with the Blades of Chaos, and along the way find the elemental weapons, starting with the Fire of Ares, moving on to the the Ice of Poseidon, the Lightning of Zeus and finally the Soul of Hades. Unlike previous games, you don’t get a magic attack straight away with all of them, this is actually a fairly inconsistent part of the combat system. You get a magic attack with the Fire of Ares, but all the rest need to be upgraded to their max level in order to use their magic. The Ice of Poseidon is also needed to breath underwater, although swimming isn’t featured as much as it has been in previous titles.

One of the best parts of the gameplay has to be the puzzles. This is another feature that this franchise is known for and Ascension is perhaps one of the most difficult games with regards to puzzles. That is both frustrating and extremely rewarding, as when you do finally solve them you get this sense of immense accomplishment, such is the difficulty of some. Don’t get me wrong, they are not impossible, just hard. These puzzles really require you to stop, slow down and think out side the box. Some of the puzzles are just genius and use the artefacts found through out the game wonderfully. Of course no God of War game is complete with out hidden chests, and there are plenty of them to help you collect your gorgon eyes, phoenix feathers and a heap load of red orbs!

This category get’s it’s own section this time around as it is such a massive jump for the God of War franchise. Sony Santa Monica has spent years trying to get multiplayer spot on and arguably spent more time on this than on the main story. If you watched the God of War: Ascension Unchained videos that Playstation released then you will know how nervous they were in adding multiplayer to a game known purely for it’s single player story mode. What they did well was release early online beta’s, trying their best to perfect the mode as much as possible before releasing the game.

Multiplayer see’s cameo appearances from the main gods as you choose your alliances for your created character. Players can choose between Zeus, Poseidon, Ares and Hades. Once you pledge your allegiance to a god you receive their gifts and powers and battle others with these abilities. Hercules and Polyphemus also make appearances as bosses in multiplayer.

The four multiplayer modes are Team Favor of the Gods, Match of Champions, Trial of the Gods, and Capture the Flag. As per usual with multiplayer online games, wins and kills earns your XP which will allow you to level up, unlock weapons and abilities. Different maps give off different power ups and are also based on famous stages in past God of War games.

While multiplayer is enjoyable, it doesn’t replace the main story by any stretch and doesn’t have that addictive nature that is essential to online multiplayer titles. God of War fans will not be buying this game purely based on multiplayer and  what has been included isn’t enough to build enough of a online user base. However this was the first attempt and if multiplayer appears in future God of War titles (if there are any) then Sony Santa Monica can use that as a good opportunity to refine it and add features to add to improve the overall experience.

Normally a God of War title would last you three, max four, play throughs (assuming you’ll play through each difficulty), but with the inclusion of multiplayer expect your time spent to be increased. However like I previously mentioned, it doesn’t seem to have the addictive presence needed to retain a data base of consistent users, this could change over time though with DLC or patches and there is plenty of time for it to expand and give players a much longer lived God of War experience. The main story is a bit short and you’ll find your self finished way before you want, but as an overall game you’ll get plenty of hours of fun out of it.

God of War: Ascension doesn’t quite live up to the high standards set previous God of War games, but it is still worthy of a place in the excellent series. Multiplayer definitely adds to the experience of the game and the story does a good job of filling in the blanks between Kratos becoming the Ghost of Sparta and destroying the Gods of Olympus. A definite purchase if you’re a God of War junkie, and well worth checking out even if you’re new to the world of Kratos.