Just hearing the name ‘Godzilla’ should fill you with excitement and dread at the same time. The gigantic creature is legendary thanks to the mainly to the medium of film and occasionally gaming. With that in mind, fans should expect a good showing from Godzilla on the PS4, right? RIGHT?! Wrong. 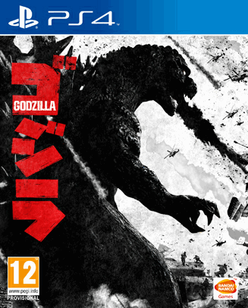 I’m going to be brutally honest about this game, it isn’t a monster, it’s a monstrous disaster. The tutorial starts off promisingly as I get to grips with the controls, tail-whipping buildings and performing running headbutts. However, the novelty wore off almost instantly. It was an unpleasant surprise to find out just how lacklustre this game is, and how it flattered to deceive throughout. The main game mode is called God of Destruction. It’s a powerful title, but weakly delivered. The game starts off in a main hub, which is similar in layout and premise to LylatWars on the Nintendo 64 in that you have to choose your route through the game. However, the narrative in Godzilla doesn’t compare at all. It’s a snooze-fest from start to finish, with very few highlights along the way. The difficulty of each area is determined by which path you choose, and each area has a Prime Minister who summons his forces to help defeat Godzilla. As  exciting as that sounds, it is anything but. I feel I would have faced more of a challenge if a group of local farmers had turned up to lead a peaceful protest.

The first area places you in a harbour and you have to destroy generators to complete missions. I felt really let down by the quality of it all, hoping that further down the line the game would offer more excitement, but I was so wrong. The gameplay is slow and controls are tiresome, guaranteed to leave you with an overwhelming sense of frustration if you’re anything like me. There is one element to Godzilla that I did enjoy, and that was when another monster appeared. The Kaiju, as they are known, would often match Godzilla’s height and a slight element of challenge to proceedings, but once you’ve fought one the rest just don’t feel special further down the line. They feel even less special when the fight scenes are so underwhelming. They should be epic set pieces, but all I ended up doing was pressing buttons over and over again until I was victorious.

To add to that, the linear path the game takes has barely any redeemable qualities. Sure, each area has something different, but it was there’s nothing striking or memorable. It’s just another boring map to progress through. If areas were a bit more open and there was some semblance of challenge perhaps it would’ve been a bit more fun, but we’ll never find out. Honestly, Godzilla isn’t defeated once, even when the creature takes on another monster. You have enemy gun fire from helicopters and tanks, but that simply ends up being an irritating mess more than anything else. Now and again I was presented with orange-tinted haze on the screen, signifying Godzilla being weakened, but I not once did I feel in danger. Hell, I didn’t even feel all powerful like Godzilla should. It just all felt like a gigantic mess.

Ah yes, mess, a word that aptly describes the controls in Godzilla. One of the most important aspects of any video game, the controls present here are just plain horrid. I’ve seen milk turn faster than Godzilla. Kind of like controlling a helicopter in GTA, you have to hold L1 or R1 otherwise you’ll end up doing some version of either a moonwalk or line dance like I did. The speed of Godzilla when reacting to your commands is just awful. When another monster appeared I ended up button mashing at times, hoping to move and land a successful strike. My tip, if you do somehow get this game, take your time with fights. All the bad stuff aside, I did enjoy firing out a beam energy from Godzilla’s mouth to take down a helicopter or two. Random, but it’s one of the very few enjoyable things about the game, so I thought it was worth a mention!

Okay, so the game must look decent, right? You know, being on the PS4 and all that. Yeah, it doesn’t. I would put Godzilla up there with a high end PS2 title or (at best) a low end PS3 one. No joke. It actually amazed me how they could release a game that looks like this on the PS4 and charge full price for it. The way the buildings collapse is just laughable, it’s as though they’re made from cardboard. Each area basically looks the same, lacking any sort of vibrancy or detail. Even Godzilla himself is awful, looking more like a drunk mutant cat than an epic beast. Hell, even if this was released on the PS2, I’d be questioning some of the visuals.

Things don’t get too much better with the game’s audio either. The background music is like a whisper in the night, failing to fill you with any sense of dread or excitement that should accompany the arrival of Godzilla. Voice “acting” is also terrible, with dialogue appearing out of nowhere and being repeated several times. Oh and don’t even get me started on Godzilla’s roar? It isn’t so much a roar, more of a meow. Well, he looks like a drunk mutant cat, so I guess that makes some kind of weird sense. I felt so bad for his weakened screech that I wanted to purchase some cough medicine for him. Seriously.

Godzilla is a huge disappointment from start to finish, even beyond the main game mode. I wouldn’t hesitate to rank this game as one of the worst games available on PlayStation 4 at the moment. The gameplay is tiresome, the graphics are weak and it’s just not fun. Avoid at all costs.

The fact you stated the graphics were that of a “high end” PS2 shows you know absolutely nothing about gaming.. Go play your Call of Duty troll.

It’s was PS3 game and this is a definitive edition for the PS4, if you expected PS4 graphics you’re a moron.. The destruction is like the old Japanese Godzilla movies you would know this but you’re obviously not a Godzilla fan. Wasn’t aware XBOX was around in the 2nd generation… Read more »

I am a G-fan and that’s why I’m disappointed. Speaking of trolls, you seriously need to work on your basic social skills you little douche-bag. It’s like every time you have anything to say, you’re lashing out, flailing around, spittle flying…

You’re no Godzilla fan. You’re probably a Call of Duty fan and this ain’t Call of Duty so it must be terrible.. If you didn’t know what you were buying when you bought this Godzilla game which was meant to be like the classic Japanese Godzilla movies, blame that on… Read more »