A few hours in to Grand Theft Auto V, it suddenly hits you. Looking out over the sprawling metropolis that is Los Santos, Mount Chiliad looming in the background, you realise that over the other side of that, there’s an area 4 times the size of all that you see in front of you. This game is simply enormous, and it’s not afraid to remind you of it. This is Rockstar dropping the mic on the current generation, and sending it off with the biggest of bangs. 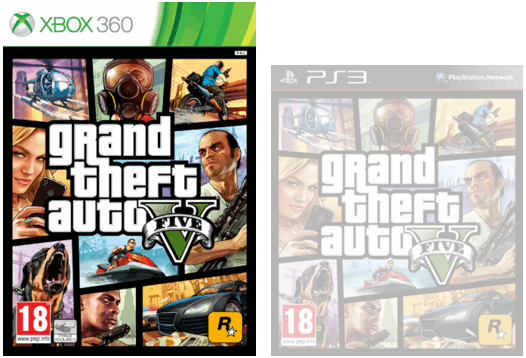 For the first time in series history, Grand Theft Auto V centres on three separate protagonists. An idea that was toyed with in the “Three Leaf Clover” mission in GTA IV, which eventually tied into the “Episodes from Liberty City” expansions, V fully realises the concept in a way that feels natural and fresh. After an action-packed prologue, you are introduced to Franklin, a gang-banger caught up in a bunch of petty crime, with much loftier ambitions than his friend Lamar is able to provide. Next up is Michael, a former career criminal with a somewhat shady past, living out his retirement with a wife he doesn’t love, and kids who don’t appreciate the life he’s given them. Finally, there’s Trevor, an outright psychopath with a penchant for extreme violence and unenviable mood swings.

A series of events ensure that the three are united, and as with most Grand Theft Auto stories, things take a huge number of twists and turns throughout a story that’s as expansive as the map in which the game takes place. As a disclaimer, at the time of writing, I’m yet to finish the story after around 25 hours, and I’ve not even scratched the surface of the side missions and additional distractions. There is a huge amount of content to devour in Grand Theft Auto V, the vast majority of which is genuinely great. From what I’ve managed to plough through so far, there’s not much in the way of filler, which is remarkable given the volume of things to do.

Rockstar’s blend of toilet humour and cutting satire blends seamlessly with the realistic world that they’ve created. From the comical names of a number of companies throughout Los Santos, to the close to the knuckle social commentary that permeates the airwaves as you cruise down the freeways in any one of the frankly ridiculous array of vehicles, it’s almost impossible to suppress some of the chuckles that the game teases from you.

Grand Theft Auto V is one of the most head scratchingly beautiful games I’ve ever played. I simply have no idea how Rockstar have managed to get this level of performance from consoles that are approaching 8 years old. The moment early on that I mentioned in the opening paragraph was the first point where I felt my jaw loosening slightly, but after that the attention to detail and general scope of the world occasionally made me stop and take stock of what’s actually happening. Make no bones about it, this is a technical marvel, and it doesn’t feel that Rockstar’s ambition has been hamstrung by aging consoles. When you realise that this is being achieved on consoles with 512MB of RAM, you can start to get excited about the possibilities of next-gen.

That’s not to say there are a few issues. There are very rare occasions where the frame rate dips below 30fps, and there are aliasing issues throughout the city, but this would have been the case with GTA IV had it not been for the “hazy” effect that was used to great extent in Liberty City. Yes, it would be nice if there was a PC version that could have Anti Aliasing applied at a solid 60fps, but for a current-gen open world title, this is one of the most spectacular achievements I think I’ve seen.

For what it’s worth, I’ve played both the PS3 version and the 360 version, and there is very little between them. The PS3 version looks a little sharper at times, but on the whole it’s great to see parity in a GTA game after the noticeably worse performance on the PS3 version of GTA IV.

The GTA series is famed for its radio stations, and V is no exceptions. A staggering amount of licensed music and original content recorded for the stations is present, as well as a wealth of voice acting that really fills out the world and adds to the atmosphere. Cars all have individual engine sounds, the air is filled with the sound of sirens and helicopters, Vespucci Beach sounds just like a busy tourist area should, and Los Santos genuinely sounds like a busy city. One of the series’ strengths continues to shine in Grand Theft Auto V. In addition to the typical GTA sounds, there’s a new element to them. For the first time, there’s a score that’s been specifically composed for the game. This comes in dynamically throughout, as you evade the cops, or gear up for a heist, and it does a great job of adding even more to the atmosphere.

The biggest change in gameplay for Grand Theft Auto V comes hand in hand with the additional protagonists. At any point during free-roam, you can switch between any of the three leads, often finding them in different situations, and in the case of Trevor, often drunk, in charge of some sort of vehicle, shouting at someone, stripped to his underwear or a combination of all of these. During missions, you can switch between characters that are on the job together, providing cover and alternate gameplay options at any one point. It’s a mechanic that works surprisingly well, and the introduction of a “quick switch” button during missions is a really nice touch.

The general layout of missions is similar to the typical structure of the GTA series, but there are enough new elements to keep everything feeling fresh. The biggest addition into Grand Theft Auto V is the focus on heists. These are superbly realised, going from planning out the big heist, choosing a method of pulling it off, to choosing people to temporarily join your crew. The satisfaction of pulling off a huge job and escaping with millions of dollars worth of loot is great, and it’s a welcome addition to the core gameplay.

Complaints from the previous game have been addressed. The driving and car physics have been tweaked, and now feel a lot better, although it’ll probably take you a while to get used to things. Shooting mechanics have seemingly been ported across from Max Payne 3, which feels natural and impressive.

Escaping the long arm of the law has a neat new twist to it as well. Instead of the police being all-seeing and omnipresent, you can actually hide out from them. The mini-map assigns them with Metal Gear-style vision cones, and if you hide out of their view for long enough, your wanted level will drop away. It’s another nice twist on the classic gameplay that really adds an air of tension to the (doubtless many) times you’ll encounter the LSPD.

The best way to describe the gameplay in Grand Theft Auto V is, put simply, the most well realised Grand Theft Auto gameplay ever released. The only thing that I had trouble with was the helicopters being a little difficult to control, but that’s more down to me as a player than a fault with the game.

Unless you want to experience the story and nothing else, Grand Theft Auto V will be a game that keeps you coming back for months down the line. The depth and breadth of content is absolutely mind blowing, and I’d hate to guess at how long it would take for someone to do everything within the game. Even if you just want to blitz through the story, it will be north of 20 hours. However, with the world that Rockstar North have created, sticking to the story exclusively is like leaving a restaurant before your dessert arrives.

All of this will pale in comparison, of course, to the launch of GTA Online. A free update to the game that will be released next month, the promise of which is mouthwatering. We’ll have some coverage of the online portion of the game once it launches, but it’s safe to say that for those who aren’t diving into the next generation of consoles just yet, Grand Theft Auto V is a purchase that will last for absolutely ages.

Rockstar have produced a masterpiece with Grand Theft Auto V. It truly is a stunning achievement, and one that will spark fierce debate in many “Game of the Year” discussions in a few months. The fact that they have managed to cram quite as much as they have into a console game that looks as good as it does is nothing short of miraculous. With so much in the game that I simply don’t have time or space to write about, there isn’t much more to add, other than if you’ve been on the fence about buying it, there’s no question that it’s a must-own for anyone with a console.