Years after the release of the original Codemasters are back with GRID 2, competing for the main racing game position on your home console. With next-gen consoles just around the corner, can GRID 2 manage to impress and take racing genre trophy? Read on to find out. 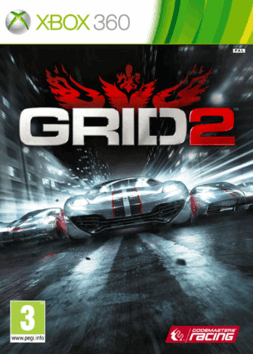 You may have wondered why I have included a story section in this GRID 2 review, but believe it or not there is indeed a story to accompany the fast packed races you find yourself mixed in throughout the game. The story sees you as an up and coming driver who is guided by Patrick Callahan who is aiming to start up a World Series Racing championship. Throughout your career, you are invited by different racing events in order to impress them and in turn, earn more and more fans along the way and cement your place as the worlds no.1 driver.  I can’t say I was too bothered about the story but It was a nice little addition from Codemasters in making you feel like you really are striving to achieve something.

The PlayStation 4 and Xbox One have been said to be able to deliver much more graphical power than the current crop of consoles can but GRID 2 aims to prove otherwise. I’ve got to say right now that the visuals present in GRID 2 are absolutely superb. Driving through the range of locations that are available in GRID 2 is just a sight you have to see for yourself, such as the sun beaming down on your car right down to your adoring fans waving you on from the sidelines. It is obvious that the folks over at Codemasters have maxed out the current generation’s power with GRID 2 but that’s just testament to the work and time the developers have put in to make GRID 2 such a visual masterpiece in the racing genre.

One of the things I liked best about the visuals was the overall layouts of the menu and career. It has a nice modern touch to it and Im sure that you will come to appreciate the visual work that has been put in to GRID 2. There are also a range of vehicles in the game, all being given such nice detail. If i had to give a negative to the visuals, it personally would be that when going through the races and you cause a lot of damage to your car, for that to be more apparent to the cars exterior visuals when you cross the finishing line. The slow replays are nice when you hit a head on collision with a barrier, but I would of liked to see more detail at the end result. I would of also liked to see a cockpit view mode make its way in the game but I do prefer the first person view when playing racing games and it certainly made me appreciate the visuals that bit more.

Another positive that Codemasters can take with GRID 2 is the sound that accompanies the fantastic visuals that I mentioned in the previous sub section of my review. The sound of the game goes very well with GRID 2 right from the sound of your engine to your assistant giving you advice about the tracks you are facing in the game. I thought that the advice I got from my racing team was invaluable for knowing when to brake etc and it really added to the overall experience that GRID 2 comes offering.

Racing games are all the same when it comes to the gameplay I feel that you want to feel that you are actually driving the vehicle. Without that sense of feeling, whether it be a driving simulator or an arcade racer, I find that they can become stale very quickly. Ill start off by putting it short and sweet… the driving mechanics that feature in GRID 2 are superb and makes the game come alive in many ways that that other games of the same genre cannot offer. The main reason why I enjoyed GRID 2 so much was because of Codemaster’s TrueFeel engine that powers GRID 2 and it really works well when it comes to fast-paced races that you will quickly become familiar with.

Drift, remember this word as I promise you that you will be using it 90% of your time in GRID 2 and it works fantastically well. Its a feature that seems relatively easy to use, but will take hours and hours, race after race in order to master it and even then you will find that you sometimes pull too much of a drift. Basically, for those who don’t know what drift is, Drift can be performed with the use of the B button and pulls speed from your front wheels while stopping your back in order to get a fluid turn when going round a tight corner. As I said just, I tended to use the Drift feature in GRID 2 a lot in my races as I felt that it gave me the edge against my competitors.  As well as Drift, the overall feeling of driving a car is represented well. Different cars have different stats in the game such as speed, acceleration etc and it does tell on the race track. I had to think of what car I would use for a track as heavier cars were much harder to drift or turn round corners.

Smashed into a barrier and find yourself a few seconds behind the pack with half a lap to go? Would be a problem in other racing games, but GRID 2 comes featuring a Flashback feature. This flashback feature allows you to rewind time for a maxium of about 10-15 seconds and put right what you did wrong before. I did enjoy having the feature at my disposal but I couldn’t help but feel like I was cheating the game when I used it. However, for the audience that GRID 2 is aimed at and being an arcade type game itself, Flashback is a feature that you might find yourself using a little too much!. LiveRoutes also makes its way into GRID 2 which makes the races a little bit more interesting in the sense that one lap of the circuit isn’t the same as the second one. I quite liked this feature but I can see why many not, preferring that of set maps.

GRID 2 offers a long and enjoyable World Series Racing career mode, and bumping up the difficulty will certainly have you using Flashback a lot and going back to the test drive circuit in order to improve your racing skills. With other modes being made available throughout the career such as time attacks etc, Career Mode will keep you entertained more than the average game. However that isn’t all, as GRID 2 also offers an extensive online mode powered by RaceNet and although I never had the ability to test this out whilst reviewing this game, the signs are good that GRID 2 will last you a lot longer than you first would of expected.

For an arcade racing game, GRID 2 offers almost everything you could ask for. Beautiful visuals, sound and TrueFeel make GRID 2 stand out from the rest, earning a podium finish at the end. There are many racing games out there, but I assure you’ll be hard pressed to find on as fun or addictive as GRID 2.