It’s Ecksard. I’ll get that out of the way because I’m a bit full of hayfever meds and lacking for decent puns. That’s how you pronounce Xrd. Apparently. Ecksard. I don’t think that’s a real word. But then it’s very fitting for the frankly bonkers game that is Guilty Gear Xrd Revelator, the thirteenth game in the long running fighting series from Arc System Works. 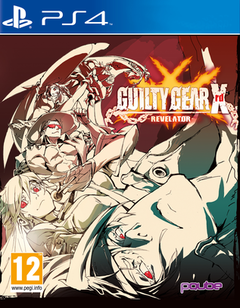 One on one fighting games in the mid 90’s fell into two mainstream camps – the more technical gameplay of Street Fighter 2 or the straightforward “cut his head off!” excess of Mortal Kombat. There were, of course, fringe players – games like Capcom’s Darkstalkers or SNK’s NeoGeo treats like Samurai Shodown, Fatal Fury or King of the Fighters. As a teen I tended to treat this as one big smorgasbord, dipping into both mainstream and obscure franchises where I could both in the arcade and at home. But, not being a Playstation owner, I missed out on Arc’s 1998 debut, Guilty Gear.

I remember being aware of it, of course – with its striking hand drawn anime visual style and fast paced gameplay, but coming into Revelator I wasn’t aware of just how deeply entrenched in years of lore it was. Where Street Fighter has kept a very loose chronology and Mortal Kombat has had a number of soft reboots to its lore, Guilty Gear is very much all about the story and there is no greater showcase for this than Revelator’s Story Mode. Put down your controller – you’re not going to be playing this. Presented as an episodic anime, rendered using the games engine, the story mode is your go-to place for the lore. It does a quick “story so far recap” to fill you in on the concept of Gears – bio engineered humans – and the politics surrounding them and the other characters. The story itself is well animated – the engine uses cel shaded 3D models in a really clever way to approximate hand drawn animation, using some very stylised character designs to create a vibrant world. My biggest criticism, however, is the lack of dubbing. I have no issue with subtitled films or games in general, but there is literally so much lore being thrown at you here that it’s easy to miss key things in the subtitles, especially when the dialogue is fairly clunky and typically overwrought. Still, it’s a great addition, almost like having a feature length anime movie bundled in with the game.

But, be honest, you’re here for the punching, aren’t you? Well, Revelator does not disappoint. There are single and multiplayer modes to be had in various different flavours, but the fighting engine itself is very solid. Playing out on a 2D plane, the action is decidedly lighter in feel than something like Street Fighter, with dashes and double jumps sending your chosen character flying around the arena. There are five attack buttons to be had; punch, kick, slash, heavy slash (all characters wield weapons) and a “Dust” button which is used for different special moves and techniques, as well as a taunt button. As familiar as it is, there are a lot of nuances to the system but it’s also incredibly accessible for new players. Accessibility is really the name of the game with Revelator. The most obvious way it does this is giving players the option of a “simple” mode which will automatically string together combos and allow special moves to be fired off from a single button. Obviously there are limitations to this which puts players at a disadvantage but it’s a great way to get comfortable with how the fights play. It’s also one of the first games I’ve seen with a built in “Frequently Asked Questions” system. From things like “How do I do special moves?” to “What do all the parts of the screen mean?” the game goes out of its way to help players find their feet.

There is certainly plenty to do in the game. As well as the big story mode, there are individual prologue “Episodes” for each character. These are effectively the games arcade mode but provide some background to the main lore with cutscenes. It’s nice to see the attention given to each character and makes them feel less like muscly pawns you’re using to pummel your opponents. There’s also the usual training, VS and online modes, the latter of which is supported with some pretty robust netcode. The mode that interested me most is M.O.M, or “Medal of Millionaires” – a survival mode in which you take part in the usual scraps until you lose. The matches have random tweaks, however, such as overpowered opponents or environmental hazards and defeating your enemy will result in item drops that can be used to upgrade your character in order to try and survive longer. It’s incredibly involved and really only for players that are comfortable with the game, but it’s an excellent addition. Add to all this copious amounts of unlockables such as new skins, concept art and the like, which you can buy using in-game currency (no microtransactions here!) and there’s a lot for the player to do.

I’ve already talked about the anime style cel shading going on in the visuals but I’ll reiterate here – the characters look great. Not only are they designed to look hand drawn, they also move with missed frames and exaggerating features to really grab that traditional Japanese animation style. And the character design! There’s some crazy stuff going on here, from knights to rock stars to pirates – look! That man’s nailed into a bed which has turned into a robot! Some may argue that the designs are a bit all over the place and, yeah, I guess they are – but there is a beauty to the madness. This is a game that’s enjoying doing what the hell it wants and simply not caring. There is a degree of “fan service” that comes with the territory involving the usual heaving bosoms, awkward camera angles and giggling girls. Given how tongue in cheek it all is it would be remiss of me to criticise the game for this – it’s very hard to take seriously and it’s hardly titillating, but if it’s the kind of thing that puts you off then it’s worth knowing it’s present.

One area I do have to be critical, however this should come as no surprise – the game really doesn’t play that great with a DualShock 4. The analogue sticks have way too much give to feel responsive for doing some of the fiddlier special moves and the joypad has a habit of digging into the thumb after extended gameplay sessions. That’s not to say it’s bad for some pick-up-and play, but if you’re serious about learning the deeper mechanics in the game, you’re going to want to get yourself an arcade stick – thankfully Arc have included the Lab Zero Games legacy drivers, ensuring that PS3 sticks will work with the game. If you already have one of these then you’re good to go!

Guilty Gear Xrd -REVELATOR- is a great fighting game which offers some very deep gameplay if you’re willing to put in the time, but is accessible enough for casual players to pick up and enjoy. The deep storyline is rewarding for anyone interested in the lore and there is a lot to see and do in the different game modes.

Yes but what are the gears guilty about