Wake me, when you need me…

He’s back. It’s been just over five years since the release of Halo 3, but Master Chief is back damn it. With Bungie no longer at the development helm and the first-person shooter genre being dominated by the likes of Call of Duty, can Halo 4 have the same impact as previous titles in the series? Should Microsoft have left Master Chief asleep? Read on to find out. 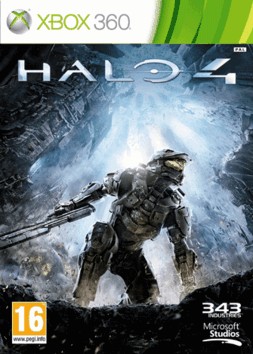 This review contains no spoilers.

After going into cryogenic sleep at the end of Halo 3, Master Chief’s latest adventure begins with him being woken up by Cortana as the wreckage of Forward Unto Dawn drifts towards a mysterious Forerunner planet. Whilst the story does focus on the Chief’s findings and battles on this planet, it would be fair to say that quite a bit of the spotlight is also placed upon his relationship with Cortana. If you’ve played the previous trilogy, then you’ll know that it’s not exactly a simple relationship, but one that has grown stronger over time. It’s tested to the limit during the course of the campaign in Halo 4, with a few genuine moments of emotion and panic shining through. Not only do they compliment the shootouts and explosions quite well, it’s refreshing to see the story in a Halo title take a more mature route. Whether it’s cutscene or in-game, the majority of story-related moments come across really well, adding some weight to the overall tale.

There are moments where the story gets a little too complicated and confusing for its own good though, especially if you’re newcomer to the series. Halo 4 might be the start of a new trilogy, but if you haven’t played the previous games then you’ll find yourself confused at certain points during the campaign. If you’re in it for the action then it’s not that big of a deal, but if story and purpose is important to you then you might want to at least read up on previous entries in the series. Apart from that, not even a slightly abrupt ending (don’t worry, it’s not like Halo 2) can hinder what is quite possibly the best story in a Halo game to date. It’s clear to see that Halo 4 was developed with a trilogy in mind, and it should be very interesting to see where 343 Industries take the story next.

Halo: Reach proved to be the first proper visual step forward for the series since the move to the Xbox 360, and with Halo 4 the folks over at 343 Industries have done a fantastic job to improve on that. Since the game engine is a modified version of the one created by Bungie, the look hasn’t changed drastically by any means, but the tweaks made have definitely had a positive effect on the visuals. The visuals have a more mature and cinematic look about them, both of which are most apparent during the game’s cutscenes. They’ve never looked better, especially when it comes to showing off Master Chief and Cortana. The in-game action has had a bit of a makeover too, with some Covenant enemies getting a brand new look and quite a few of the usual weapons receiving visual tweaks. Even Master Chief’s HUD has been improved, looking more like something you’d expect from someone in suit like that. There are plenty of new enemies and weapons as well, all of which compliment the look of the Halo universe exceptionally. Environments are also much grander is terms of their scale, with some levels looking so good that you’ll want divert from the standard route to go and explore. Oh, and for the graphical enthusiasts reading this review, you’ll be happy to know that Halo 4 runs at a native resolution of 720p.

Even with the appointments of Sotaro Tojima (audio director) and Neil Davidge (lead composer), the sound design in Halo 4 is on par with previous titles and, in some respects, surpasses them. The much-loved theme is missing, but is replaced by several tense and sweeping scores that compliment the on-screen action superbly. On the voice acting front, Steve Downes returns as Master Chief and Jen Taylor reprises her role as Cortana. Both are fantastic, delivering their lines with emotion and purpose, something that was missing from previous titles at times. Even the side characters are voiced well, and some of you will be happy to know those crazy screams from the Covenant Grunts are present. After all these years, they’re still so damn hilarious.

It couldn’t have been easy for 343 Industries to take over development duties for Halo franchise on the back of Bungie’s incredible success. Imagine the predicament, do they overhaul tried and tested gameplay mechanics or just leave everything as it is and just throw in a new story? It must have been a difficult decision. In the end, what they’ve done with Halo 4 is somewhere in between those two options. The core gameplay is essentially the same as previous titles, which means the guns, grenade and melee combination is still prominent whether you’re playing the campaign or competitive multiplayer. However, 343 Industries have also freshened proceedings up by introducing new enemies that require different tactics to be taken out and mixed them up with some fantastic set piece battles. One moment you’ll be on a ship resisting a Covenant onslaught, the next you’ll be jumping into a Wraith with comrades and taking down everything in your path. Very rarely during the campaign will you be repeating the same task or staying one particular environment for too long. Both were glaring flaws present in quite a few of the previous titles in the series, so it’s nice to see that 343 Industries have taken note and eradicated these annoyances with some good level/mission design.

The missions are helped greatly by some excellent AI, keeping you on your toes throughout the length of the campaign. Halo titles have always been known for their top notch AI, with enemies moving and reacting to your actions in a believable way and Halo 4 is no different. In fact, the AI seems slightly improved, but that could be down the introduction of new enemy types that attack and defend themselves in ways the Covenant perhaps didn’t in previous titles. The majority of the battles against these enemies are an incredible amount of fun, so much so that you’ll look forward to the next encounter.

None of the battles, whether it be the Covenant or new foes, would be the same without the fantastic array of weapons on offer in Halo 4. The usual Spartan and Covenant weapons such as the assault rifle, battle rifle, needler and carbine are present, but this time they’re joined by a selection of new shooters as well. They all have their uses, and as is the case with previous games in the series, you’ll end up using all of them before at least once before the end of the campaign. You’ll end up with your favourite combination of two, but the great thing is that Halo 4 (rather sneakily) encourages you to experiment. Each weapon feels fantastic, helping you to get immersed in the moment during battle. If you’ve played a Halo title before, it’s a familiar feel, especially when it comes to some of the older weapons, yet it feels fresh at the same time too. The same sentiment applies to the vehicles you pilot during the campaign, it’s almost like riding a bike. A bike with a brand new lick of paint. Staying on the topic of weapons, you’ll get access to certain abilities as you progress through the game, each one designed to help you during certain combat scenarios. The jet pack and speed burst are just two of these abilities, with the former giving you the aerial advantage and latter allowing to you zoom away from certain bigger enemies.

If you go through it on the normal difficulty, the campaign should last you around eight to ten hours. Step up the difficulty to heroic or legendary,  and you can probably add around three extra hours to the aforementioned figure. Introduce the four player co-op (online and offline) to the mix and you have a campaign that can easily be replayed two or three times. It doesn’t end there when it comes to story-related content either, as you have the Spartan Ops mode which you can get stuck into by yourself or with up to three friends. With the promise of new content each week over a period ten weeks, it’s a mode that will keep on giving for a while after you’re done with the main campaign.

Finally, you have the famous Halo multiplayer, which is still as addictive as ever. Taking inspiration from the likes of Call of Duty and Battlefield, the more you play it, the more you will get out of it. Not only will you rank up, but you’ll unlock new weapons, abilities, armour and loadout slots. There are several game types for you to get to grips with too, including the likes of Infinity Slayer, Oddball, Capture the Flag and King of the Hill. You might not enjoy all of them, but play for a few hours and you’re sure to find a favourite or two. Also, if you’re so inclined, you can save and share your most memorable online moments in screenshot or video form. For the creative Halo fans out there, Forge mode makes a welcome return, allowing you to create your own maps, share them and then play on them with friends. There really is so much on content offer in Halo 4, so much so that almost everyone will find something to enjoy.

Whether or not Microsoft should’ve resurrected the Halo series is irrelevant at this point. Like it or not, Master Chief is back. And you know what, it’s great to be back in his massive boots. 343 Industries have done a fantastic job in staying true to the Halo roots whilst adding their own, modern twist to the gameplay. However, whilst there’s no doubt that they’ve freshened the series up a little, those expecting a massive departure from previous Halo games might end up somewhat disappointed. That said, despite the slightly abrupt ending, the campaign is a blast throughout and multiplayer is sure to keep you addicted until the next addition to the series. Simply put, if you’re a fan of the series, Halo 4 won’t disappoint. It’s not a perfect return, but Master Chief is well and truly back. Long live the Chief.