On the first day of Christmas my true love sent to me… a Partridge in a Pear Tree. Not only that, he also sent me all the bird love I never knew I needed! That’s right, flying in over the Christmas period was Hatoful Boyfriend: Holiday Star. What does school life with our feathered friends have in store for us this holiday season? Read on to find out!

Hatoful Boyfriend: Holiday Star is a sequel to the original Hatoful Boyfriend game, first released in Japan in 2011. For those not familiar, this is based on a Doujin Soft Otome Visual Novel created by Hato Moa and her circle PigeoNation Inc. For those of you who are thinking “What on earth is Doujin?” or “Do you mean Doujinshi?”, Doujin is what we would call in the west an independent artist or games developer etc, depending of course on what type of content is produced. This tale originally started as a short April Fools joke but the surprising and overwhelming popularity cast it into full production across PC, PlayStation 4 and the PlayStation Vita. Personally I am a huge lover of Otome Visual Novels and Hatoful Boyfriend seemed to to swoop across the Otome scene like an enormous flock of fans but it always seemed too weird, even for me. Despite my dubiety these birds have captured the heart of many; spanning across books, comics, radio, drama CD’s and even launched a Kickstarter campaign for a line of plushies which impressively reached its stretch targets! 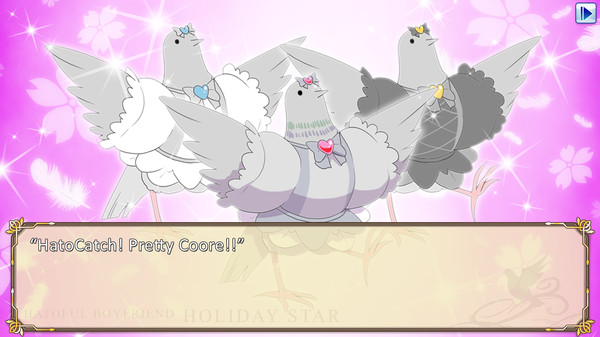 So with that, I decided to get started with Holiday Star. Now I am afraid this is where I will have to start treading on eggshells as the story and gameplay are very limited. As I mentioned before, this is a sequel and thus it requires you to have prior knowledge of the characters and past events if it is to make any sense to you at all (though how much sense does having interspecies relationships with birds make anyway?). If you are considering this then I would strongly recommend you play through the original first! Whilst it isn’t imperative to do so, it is hard to get into the narrative and form a bond without knowing the characters history, personalities and the state of the world they live in. I found myself utterly lost in this surreal world, my head filled with what’s, why’s, how’s and who’s as a newcomer to the series.

So onto the story! As with all Otome games you play the role of the protagonist primarily named Tosaka Hiyoko (though this can be changed to whatever you like). Through a series of worldly events that come to pass you are the sole human student at the all-birds school, Saint PigeoNation’s in Littledove Hachiman City, where you begin your unusual second year of high school life. Hatoful Boyfriend: Holiday Star contains 4 main story chapters. There are 4 short episodes to be unlocked as you complete each chapter and 8 shorts relating to each individual bird love interest. You can also read through a series of radio episodes which answer submitted questions and provide some background on the characters and past events. Overall I completed the game in around 5 hours which included the occasional break.

The gameplay itself is a little unorthodox, where it is much more a Visual Novel rather than an Otome game. Allowing you to pick options that will lead you towards a certain route are scarce as the overall plot does not focus on you and one bird in particular but rather the group friendships and rivalries. Any options you are presented with make no difference to the story or its direction; however there is a right or wrong choice, with the wrong choice resulting in a rather instant game over. If I were to give you a hint it would be to save often as failing that will mean trawling through the text from the very beginning. (I found this out the hard way so as to spare you all the pain…) Of course the biggest thing to get over for me was the fact that they are birds, although playing through their individual shorts does allow you to see them in a more human form!

As an independent production, budget was low and so most of the production was crafted by Hato Moa herself. Larger Visual Novel series dominate the market and have spoiled us with extravagant artwork and voices you can swoon to but unfortunately, there is none of that here. As to be expected, there is a lot of text to get through and no voice acting to help break it up besides the occasional background and musical themes. The soundtrack is limited and predominately orchestral with upbeat and sometimes dark tones. One notable track includes ‘Dance of the Sugar Plum Fairy’ by Tchaikovsky which to me perfectly sums up the comedic and whimsical world of Hatoful. Visually the game is not as lustrous as you might expect from a Visual Novel but that isn’t to say this belittles Hatoful, after all it is the story that really counts. Artwork has either been sourced using royalty free stock, contributions by fans or original backgrounds and birds created and photographed by Hato herself. Whilst I wasn’t a fan of some of the pixelated images and the thick strokes outlining the birds portraits, I did find charm in the various watercolour landscapes and scenes that were very beautiful, even if some of the topics were quite unsettling.

This brings me onto my next point. At first glance and by nature Hatoful Boyfriend may seem comical and light-hearted, which is not wrong. I admit to struggling to understand that fact at first and I was sceptical that I would enjoy the game at all, often tempted to use the skip button to speed through the text but this cuckoo narrative somehow clipped my wings, leaving me to endure the text throughout. The appearance of spoofs from popular series made for some fun spontaneous moments; from Ace Attorney’s I Object!, Pokémon attacks and even HeartCatch PreCure all adding to the amusing experience. Anime and Manga culture is spread throughout the game, even including characters raising death flags (causing something bad to happen even more likely after saying something silly), cosplaying birds, Comiket markets and inappropriate use of Otaku and Fangirls (you will have to play to discover my meaning here…). You can be sure that all these eccentric characters enforce the fact that the game is as crazy as a loon but it is not always as silly as a goose.

The first chapter seems to gently ease you in to the wittiness of the world but by the time I reached the final chapter I felt like I had just been handed two 50kg dumbbells! Whilst for the sake of spoilers I can’t divulge too much on this, the game features some pretty dark topics and some important life lessons. If you are sensitive to darker topics then you may wish to take some caution as I would not recommend judging this game by its cover. I was caught off guard by how serious the topics turned and one in particular really shocked me, something I never expected from this game.

Compared to other Visual Novels this one may be the ugly duckling in certain aspects. It may not be the most visually appealing and the gameplay could leave much to be desired but it is important to keep in mind that it is more of a side story to be played in addition to the main game. With that being said I find it hard to recommend this as a must buy, with exception being if you have played the original first and are a Hatoful fan. Once the downy feathers have been removed it delves into a deep and complex narrative that looks at some serious and painful aspects of life that you would never expect from a game such as this. Hatoful Boyfriend: Holiday Star surprises with its darker tones, but unfortunately fails to impress overall.