InFAMOUS: Second Son still remains one of the graphical showcases of the newest console hardware on the market. With the dust settling on Delsin Rowe’s adventures in Seattle, the focus moves to one of the supporting cast, “Fetch”, in her own side story in the form of First Light. Is it worth a purchase if you’re not a hardcore inFamous fan? 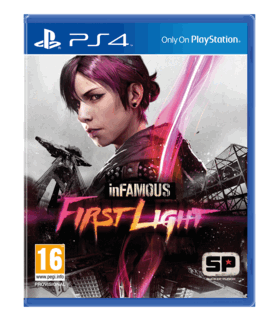 If you played InFAMOUS: Second Son and are anything like me, you probably thought the “Neon” powers were the coolest of the lot. Well, it appears Sucker Punch must have thought the same, as this DLC is all about the Conduit you absorb those powers from. Abigail “Fetch” Walker’s story takes centre stage, jumping between incidents in her past and the timeline set just before Second Son takes place. Fetch’s motivation in the main game is laid out well in this DLC, and further fleshes out the motivation behind her actions that play out in Delsin’s story, particularly the mission to eradicate Seattle of its drug dealers.

In some respects, it’s a typical story of betrayal and family loyalty, and it’s interesting to see the tale told in the inFamous universe. Whilst solid, it falls short of tugging at the heartstrings quite as much as it sets out to. It’s a trap that’s easy to fall into with shorter downloadable stories such as this, there’s so much to fit in and the chance to get the audience fully familiar with the new characters, and achieve a level of emotional investment, is extremely difficult. Whilst Fetch and Delsin had a “will-they-won’t-they” thing going on in Second Son, she remained somewhat of an enigma, and despite the best efforts, First Light doesn’t quite hit the heights that it needs to for that emotional connection.

First Light serves two distinct purposes, in my opinion. The first one is for fans of Second Son to get some more content in the same city as the main game, and the second is to get people who have been on the fence about picking up Second Son a chance to dive into the world of inFamous without a larger financial commitment. Priced at £11.99, First Light is available as a standalone download, whether you own Second Son or not. Sucker Punch tried this with the “Festival of Blood” content on the PS3 with inFamous 2, and it worked really well. The ability to deliver smaller stories without the need for a full priced game is great for those who may have already sold the original game, or indeed those who just want to dip their toes into a new franchise.

Gameplay wise, it’s more inFamous. With more of the cool neon powers. There are more collectibles (This time round they’re Neon ‘Lumens’) that allow you to increase your skillset and strengths, there are more DUP enemies to fight, and there are more side missions to undertake. Sadly, one of those side missions is the “graffiti” one from the main game. For the life of me, I can’t think why this was deemed a worthy inclusion for each of the areas in First Light’s Seattle. It worked well for a few gimmicky moments in Second Son, but as an extended mechanic it falls a bit flat.

That aside, it’s still the same gameplay that makes Sucker Punch’s franchise stand out. There is a definite satisfaction to dashing through some portals that give you extra speed, leaping into the air, and landing in a swarm of enemies to batter them into next week in a flurry of pink and blue. If you’re expecting new tricks, you’ll be sorely disappointed, but that’s not what First Light promised, and nor is it what anyone should expect.

What First Light does do very well, however, is carry on the staggering graphical fidelity that Second Son brought to the console back in March. It’s hardly a surprise, but the fact that it’s being brought to a “smaller” downloadable title is impressive. The game runs at 1080p with a frame rate that fluctuates and occasionally hits 60, but never dips to unplayable levels (At a guess I’d say it hit 30fps a couple of times)

In addition to the 4 or 5 hour campaign, there are several combat arena style areas which allow you to earn more upgrade points, hone your skills and generally cause mayhem in the confines of the DUP training facility where the more recent parts of the storyline are set. If you own Second Son, you can even play as Delsin and try your hand with the existing powers. There’s a lot to dig into in First Light if you want to with these modes and a ton of other challenges, and Sucker Punch have acknowledged this by giving the title its own Platinum Trophy. Be warned though, it’s no easy feat to achieve! Also making a welcome return is the Photo Mode that was introduced to Second Son. With the game looking as good as it does, it’s hard not to want to photograph everything in sight, and with all of the enhancements and effects, it’s a lot of fun to mess around with and snap some beautiful looking shots throughout your time with the game.

All in all, inFamous: First Light is a solid addition to the franchise that further showcases the technical excellence that Sucker Punch have been able to pull off so far. Whilst the story falls a bit flat in places, it’s generally solid enough to carry you through it. The challenge rooms are a lot of fun and will put you through your paces as you try and best your friends’ scores, and if you’ve not yet sampled any of the inFamous franchise, this is well worth a go as an introduction. A good example of DLC done right, inFamous: First Light sheds some brightly coloured neon light on areas of Second Son that were previously unknown to us all.