Injustice: Gods Among Us Review

I’m sure everyone’s had the “Who would win out of Batman and Superman?” conversation at some point, and Injustice: Gods Among Us aims to settle those debates. With Mortal Kombat co-creator Ed Boon taking the helm and detaching the DC Universe from his own MK franchise, does Injustice stand alone as a credible beat-em-up? And does it redeem Aquaman? 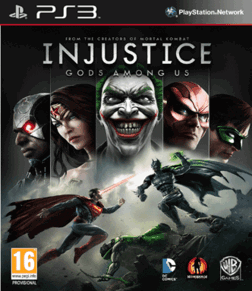 Injustice’s story mode starts off with a shot of Metropolis having been destroyed by the Joker with a nuclear weapon, with practically all of its residents having been killed, including Lois Lane and Superman’s unborn child. However, it transpires that it was Superman himself that caused the death of his loved ones, having been drugged by Joker. During Batman’s interrogation of his nemesis, Superman intervenes and, consumed by grief, murders Joker and paves the way for a new world order, with him at the throne.

The game then cuts “Elsewhere”, with a huge battle raging between DC Heroes and villains above the skies of a pristine, undamaged Metropolis. As the battle goes on, it emerges that Joker is in the centre of the city with a nuclear weapon ready to detonate. A fight breaks out between him and Batman, and others are made aware of it. A number of other heroes head to try and stop the bomb from exploding, but instead are transported, along with Batman and Joker, to the alternate dimension from the prologue, where the bomb successfully detonated and Superman has gone mad with power. In this dimension, good is bad, bad is good, and all of the allegiances you thought that the DC cast had are cast aside, as the likes of Green Lantern face off against former allies such as Cyborg and Raven, and in some cases, even an alternate version of themselves. Sound confusing? It can be at times, and it did take a couple of double takes before I’d fully wrapped my head around the sprawling mass of dimensions and alternate characters, but on the whole it’s not too bad.

Injustice has a structure that will be familiar to anyone who played 2011’s Mortal Kombat reboot. You start off playing as Batman, and face three or four fights in succession before moving on to the next character. All in all, there are a total of 11 separate sections in the story mode, enabling you to get a feel for which type of characters you wish to use elsewhere. This method of story progression suits the game really well, and slowly ramps up the difficulty until you face off against Superman himself.

A lot of work has clearly gone into Injustice on the graphical front. With DC Comics having given NetherRealm some degree of creative freedom, the character models are mostly well designed, with the major exception for me being Wonder Woman, who looks slightly terrifying in this, rather than the sex symbol she is often portrayed as elsewhere. The spectacular “Super Moves” that each character can pull off all look very impressive, and the animation is smooth and fluid, with a number of effects looking very nice when you hit your opponent with a smaller signature move.

The game runs at a solid 60 frames per second, which is essential for a fighting game these days. There is a definite distinction between the custcenes and the start of the fights, but it is always for the best. At no point did I see any slowdown, screen tearing or frame drops.

The environments that Injustice offers up are all extremely well crafted. Each area has a number of interactive elements, as well as a very busy background. Environments crumble as you take down your foes, with glass smashing in the Batcave, and the heads of statues rolling down the street in Metropolis, almost resembling scenes from Cloverfield at times. However, this never detracts from the task at hand, and it’s a credit to NetherRealm that they have managed to create arenas that are as busy as they are without distracting the player much at all.

If I have one criticism to make of the graphical styling in Injustice, it’s that the whole thing seems slightly muted. I know it’s made by the same folks who did Mortal Kombat, but would it really hurt to bump the colour saturation sliders up a little bit? It feels as though there are more shades of grey in this game than the average middle aged woman’s bookshelf.

Following on from the points made about the graphics in the environments, the sound design compliments the gameplay in all the right ways as well. At no point do you feel tempted to turn the volume down because it’s too distracting. In fact, the game really makes every punch and kick feel like it’s landed properly, such is the weight behind the sound. The voice acting is solid, although if anything, I’d have liked to have had a few more lines recorded for the characters. There are only so many times you can hear “SOLOMON GRUNDY, BORN ON A MONDAY” during repeated attempts to overcome the grey behemoth. Similarly, the insistence of sticking with the same recording for a mid-fight break or the end of the fight is a tad frustrating, but it’s really not a deal breaker.

As with any fighting game, Injustice lives and dies with the gameplay. Fortunately, with Ed Boon at the helm having come off the back of the successful MK reboot, the game stands on its own two feet as a solid beat-em-up. The four face buttons are used as a light/medium/heavy attack, with the final button reserved for a specific character trait. Batman fires Batarangs, Catwoman jumps on her enemy with her claws out, and a number of others gain temporary stat boosts at the touch of a button. As previously mentioned, you can interact with the environments to hurt your enemies further, and it’s all in the name of filling up your Super meter. Once this is full, you can unleash a devastating super move, provided the enemy doesn’t block the initial attack from it! Interestingly, each and every move has a detailed breakdown in how many frames it takes to complete, including a list of advantages and disadvantages for them as well. Whilst this won’t help out the casual player, I imagine that hardcore fighting fans will love this, and really be able to pick apart the mechanics of their chosen fighters to great effect.

It’s all too easy to draw comparisons to Mortal Kombat, but essentially Injustice is MK with superheroes and no fatalities (And a ‘hold back to block’ mechanism). It’s not going to be as flashy and quick as the likes of Tekken or Street Fighter, and there won’t be any 100+ hit combos being busted out all over the place. However, it will reward your patience and persistence if you stick with it. I found myself creeping up to consistent double figures with combos towards the end of the story mode, which was a far call from the start where I struggled to land anything more than three punches in a row! An interesting addition to the fray is a “Wager” system, where you can bet a portion of your accrued super meter against your foe’s to gain health back, or inflict more damage on your opponent than normal. It’s a novel inclusion, but it’d be nice if things were a bit quicker to resolve.

The one area that the gameplay falls slightly short is the repetitive Quick Time Events in the story mode. It breaks up the action quite nicely with a series of small scenes that tie into your next fight, but I don’t think QTE’s were the best way to do it, and they do feel a little shoehorned in at times. Overall though, the game handles really well, and you rarely feel that the game is cheating you out of a victory, and it’s a lack of skill that’s hindering your progress.

Alongside the story mode in Single Player, there are a couple of other modes to get stuck into. There is a traditional “Ladder” mode (called Battles) with multiple combinations of enemies to fight, and a character specific “S.T.A.R. Missions” mode. In this, you are posed with a series unique challenges for an individual character. You have to complete the challenge within the parameters set, then move on after being awarded between one and three stars. With 240 of these mini missions to get through, completionists will have a whale of a time honing their skills to get 3 stars in all of them.

Online feels solid, with no noticeable lag or problems. Along with the traditional versus mode, the brilliant “King of the Hill” mode has been ripped straight from the latest MK, which allows you to spectate until it’s your turn to take on the king. A survival mode is brought into the game as well, allowing you to test your skills and see how long you can go with only one full set of health. As with most fighting games though, you’ll find the odd user who likes to spam the same irritating move over and over, but that’s one of the things you’ll need to get past.

With every fight, both on and offline, you earn XP. This can be used to purchase new character skins, concept art, music and other in game trinkets. In addition to this, you also have a “Hero Card” (Similar to Call of Duty’s player cards) which are customizable, with unlocks being achieved through a series of in-game requirements. Again, if someone wishes to get all of these completed, they’re in for a challenge!

A novel twist on the game is incorporating activity on a mobile app into the standalone game, and vice versa. This is done via the “WBID” login, which allows progress across the full game and mobile app to synchronise, allowing you to unlock parts of the Hero Card on the console, and power ups on the app. It’s a neat twist that adds an extra dimension to the game, and doesn’t require you to pump funds into in-app purchases to further your progress.

Injustice: Gods Among Us is a solid fighting game that, whilst not bringing much new to the table, performs admirably and will no doubt find a hardcore following among fans of the DC Universe and Mortal Kombat style games alike. An impressive roster of heroes and villains cuts both ways though, as the slightly convoluted storyline that intertwines a lot of characters with evil alternate versions of themselves in the story mode. Fortunately, there’s a lot more to it than that, and the depth of the extremely well designed environments and mechanics go quite some way to making this a genuine contender. Just maybe next time, throw a bit more colour into the mix?