There are so many popular anime characters around at the moment, from the Dragon Ball Z series to the craziness of One Piece. There is so much variety! With that in mind, Bandai Namco has decided to chuck a whole lot of them together, creating a new brawler that is an anime fan’s wet dream. Is the experiment successful? Read my full review to find out! 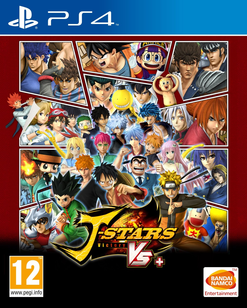 Let’s be honest, Goku from the Dragon Ball Z series taking on Naruto Uzumaki from the Naruto Shippuden series must be something anime fans have dreamt of for ages. The fact that Bandai Namco has made this a reality in J-Stars Victory VS+ will be enough to send some fans rushing to their video game shop. Huge props to them and Spike Chunsoft for making it happen as the roster in the game is crazy, giving you a wide range of characters to choose from. 52 to be exact. Fifty two! Seriously, it’s amazing. I was almost overwhelmed at first, not knowing which dream anime match to start with first. Well, Goku vs. Naurto, obviously.

Gushing about the bulging roster aside, J-Stars Victory VS+ features (like most brawlers do) a main mode of sorts.  It’a called J-Adventure and (sadly) it’s not that great. Playing it becomes a tad boring and repetitive after a short period of time. There are four characters to choose from initially, with the overarching story rarely differing from one to another. Basically, the story mode gives you the chance to become the ultimate show jump champion, with different battles being fought and allies made along the way. You travel in a ship across a map, which eventually can also sail across land and sea. There are some RPG elements thrown into the mix, allowing you to level up, but not even these hold the boredom from setting in after a few hours. Victory Road (the game’s single-player battle mode) helps to keep things going, tasking you with completing objectives as you take on AI controlled opponents. It’s decent, but online play is where the game gets its legs. A fun mode (that works), you can take on up to four players from around the world and attempt to the smackdown. Oh and there’s an additional single-player Arcade Mode that’s exclusive to J-Stars Victory VS+ in North America and Europe. Result.

On the visual front, a huge part of anime culture in general, J-Stars Victory VS+ doesn’t particularly impress. I’ve played some fantastic ainme titles where the developers have utilised the power of the PlayStation 4 fantastically, but that doesn’t seem to be the case here. It just all looks and feel a little too block-like, leaving me very much underwhelmed feeling when I was brawling. That said, the game does have a great, vibrant look and runs fairly smoothly – always a good thing when it comes to a brawler.

On a positive note, all the voices featured in the game are Japanese. English subtitles, of course. For a game that brings together the best of Japanese anime, it is to be expected, but still something to be celebrated. Also, the quirky, somewhat fast paced music that accompanies the battles fit the style of the game really well. Some might find it gets a bit annoying with hours of play, but you can always turn the volume down if that’s the case.

Okay, the actual battles, where it all counts, are great. Thank the gaming Gods! Spike Chunsoft have done a fantastic job in making the game accessible to any kind of player. It’s the simplicity that often makes J-Stars Victory VS+ a joy to play. It’s certainly why I’ll keep going back to the game from time-to-time. Easy enough to pull off, normal and strong attacks all mapped to one button press on the control pad. These attacks, when made in a combo, can be lethal, often sending your opponent crashing through multiple buildings. Needless to say, if you’re looking for the depth of say Street Fighter or Tekken, this game might not be for you. It’s designed around being easy to pick and play, having fun within minutes. That’s not always a bad thing, and that definitely applies to J-Stars Victory VS+. It’s about the spectacle and having fun, just like the majority of anime if you think about it. That said, the one gripe I did have is that when my opponent was on the floor, I couldn’t carry on with my brutal assault. They seemed to become temporarily invincible until they got back up, often leading to them carrying out their own attacks on me, which became a tad annoying given the ethos around everything else.

Speaking of ethos, your victory burst attack is where the real carnage happens, activated by the pressing R3 button when you have filled up the appropriate bar.  With your victory bust, you can carry out your character’s ultimate attack, leaving your opponent helpless as you lay out a brutal beating that even the mightiest of Super Saiyans would be proud of! It’s not just one and ones that the game encourages, with team battles being a major highlight in J-Stars Victory VS+. These battles also give you a support character, which can be activated to help you out when you are in a tight spot. Pretty cool.

J-Stars Victory VS+ serves up a simple brawler, throwing in the super heavyweights of the Japanese anime world to sweeten the deal. The decision to hold back the depth in favour of something that is more pick up and play is a brave decision, but works given the subject matter of the game. Surprisingly, it’s the story mode that gets boring before the combat does. I can definitely see anime fanatics (like myself) having a blast with this for several hours, but if you’re a fighting game “snob” it might not be for you. Seriously though, if you don’t want to get too technical and have the urge to fight it out with the best from the anime world, then J-Stars Victory VS+ is the game for you.   ??!