One of the best games ever made… 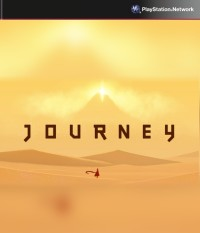 Note: Our original review of Journey on the PS3 can be found here, this is review of the PS4 version and this particular reviewer’s opinion.

1 An act of travelling from one place to another

1.1 A long and often difficult process of personal change and development

The Oxford dictionary defines the word in two different ways. Both are, of course, correct and apply to the game at hand. However, for me, it’s the second one that sums up exactly what Journey is all about.

As cheesy as it may sound, it’s a game that means a great deal to me. I won’t go into full detail (don’t want to bore you), but when I played it in 2012 for the first time I was going through a tough period in several areas of my life. I had pretty much shut myself off from the outside world and took solace in gaming. How Emo of me, right? Anyway, that’s when Journey came along and took hold of me like no other game ever has or probably will. Don’t worry, I’m not going to make a speech about how it changed my life, it didn’t, but it certainly had an impact. It made me realise, you can’t give up. It made me realise that not everyone in the world is an asshole, good people are out there. Yes, you’re reading this correctly, a game made me realise these things, but how?

The answer is simple yet brilliant, much like Journey’s gameplay mechanics and story. There’s no lengthy explanation or opening cutscene, instead you’re dropped into game almost immediately. It’s you, a mysterious robed character, and shimmering desert as far as the eye can see. Walk forward a little and you see a mountain in the distance; that’s your goal. Well, at least you assume it is. Walk further still and Journey’s gameplay mechanics begin to unravel. With help from your beautiful scarf, you press one button to float gracefully and another to interact, chirping as you do. You’ll use a combination of these two actions to traverse the environment and solve puzzles to progress, but that’s essentially the set-up. From that point on it’s all on you. No hints, no tips. It’s all up to you.

It’s a lonely feeling. Just you, wondering the vast desert trying to reach this mountain in the distance. That same feeling is replicated in the game’s presentation at this point too. It’s not exactly dark, but there is a sombre look about the game. Don’t get me wrong, the game looks beautiful, like an oil painting come to life, but you feel it. Sound is pretty much non-existent, with just the chirping of your character or sound of the desert wind echoing around your ears. Then, as if by miracle, something amazing happens.

As you trudge through the desert, you start to make out another person in the distance. You can’t quite believe, I didn’t, but it’s true. It’s another human player. The excitement and sense of discovery is unreal, unmatched. I genuinely felt my heart racing. There’s a twist though, you can’t communicate or interact with this person in the “traditional” way. Your only means of interaction is with that by pressing a button and chirping at him/her. It’s arguably the most rudimentary form of communication and interaction in a modern game, but it’s also brilliant. I almost can’t put it into words, but you manage to form the strongest bond with this mysterious person through the magic of this chirping. It’s almost like two birds communicating. No-one else can understand what you are saying or trying to say to each other, but you both do. It’s amazing, two humans building a connection without any words whatsoever. It’s fascinating and heart-warming at the same time.

And this is where the tone of the game shifts from feeling lonely to something utterly magical, breathtaking at times. The visuals come alive; almost looking like the world wants to burst out of your TV screen. The PS3 version is still gorgeous, but this PS4 incarnation is just that bit more pleasing to the eye, running at silky smooth 1080p and 60 frames per second. It really is like watch an oil painting come alive. Then you have the music, my god is it good. It’s a massive part of the Journey experience, complimenting the gameplay and sometimes even stealing the spotlight completely. It’s no surprise to me the soundtrack got nominated for a Grammy, the first video game to do so. Emotional and uplifting, the talented Austin Wintory’s score is simply breathtaking, bringing out emotions from me that I never thought a game could. It’s wonderful, effortlessly mimicking your journey and the bond you build with your mysterious partner.

It’s a bond that only gets stronger too. As you progress towards your goal, the mountain in the distance, you’ll share moment of pure joy and there’ll be plenty of difficulties as well, but you do it all together. That connection, the bond, it’s ever present. Genuinely frightened of losing your partner and being left alone, you’ll look out for each other every step of the way. It’s crazy when you think about it, but that’s what Journey does. The antithesis of most other games where you’re out to kill everything and everyone in sight, it’s refreshing. More than that though, it’s genuine. I cared, I actually cared. So much in fact, that at the end of the game (no spoilers), when you find out who you were partnered with I felt compelled to message this person and thank them for an unforgettable experience. I got a reply too, thanking me and even apologising for certain sections where he/she tried to help but couldn’t. That’s Journey. That is what it’s all about.

By the end of it all, half of me was an emotional wreck, but the other half was filled with joy and an overwhelming sense of purpose. It didn’t matter one iota that the game was two to three hours long, I couldn’t care less. Just like I said at the start of this review, I’m not going to be overdramatic and suggest Journey changed my life, but I would be lying if I said it didn’t have an impact. Some people listen go for a run, workout, write, listen to music or play an instrument to get through a difficult period in their life, and that’s fine. I played a game called Journey. It made me realise a few things about myself, life and other people. Some might find that weird or stupid, and that’s fine too, but I wanted to share my experience in this review. Also, I wanted to correct an injustice, something that still haunts the writer of our PS3 review. It’s just 0.5, but still… Dave, if you’re reading this, it’s sorted.

Before I finish up and give my verdict, I just wanted to draw your attention something. In an interview about Journey, shortly after it was released on the PS3, the game’s creative director Jenova Chen said the following:

“People will venture out to the height of the mountain to seek for wonder. They will stand and stare at the width of the ocean to be filled with wonder. But they will pass one another in the street and feel nothing. Yet every individual is a miracle. How strange that nobody sees the wonder in one another.”

Chen basically quoted 3rd century theologian St. Augustine, describing how humans fail to appreciate one another and summing up Journey in one fell swoop. The destination, in this case a mountain, didn’t really matter. It was all about the journey and the connections I made with people on the way. As Chen himself said, every individual is a miracle and Journey is a reminder of the wonders we find in each other. Well said.

It could be argued that no game is perfect, but I present to you Journey. It achieves exactly what it sets out to do and then some. If that’s not perfection or as close to it as you can get, I don’t know what is. A magical and completely unforgettable experience, Journey is quite simply one of the best games ever made.

If all games lasted just over 1 hour no one would game any more.

That’s not the point. Have you played Journey ? The time play is perfect, there was no need to make a longer one. It’s short, but very intense. And the game costs less than 20$, the price reflects the short experience. Considering Journey is one of the best gaming experiences… Read more »

Asim, I want this game. Life just got in the way for me but after reading this, and watching the video, I’m going to finally take the plunge at the next opportunity.

Thanks for reading. I’m pretty sure you will love it. 🙂